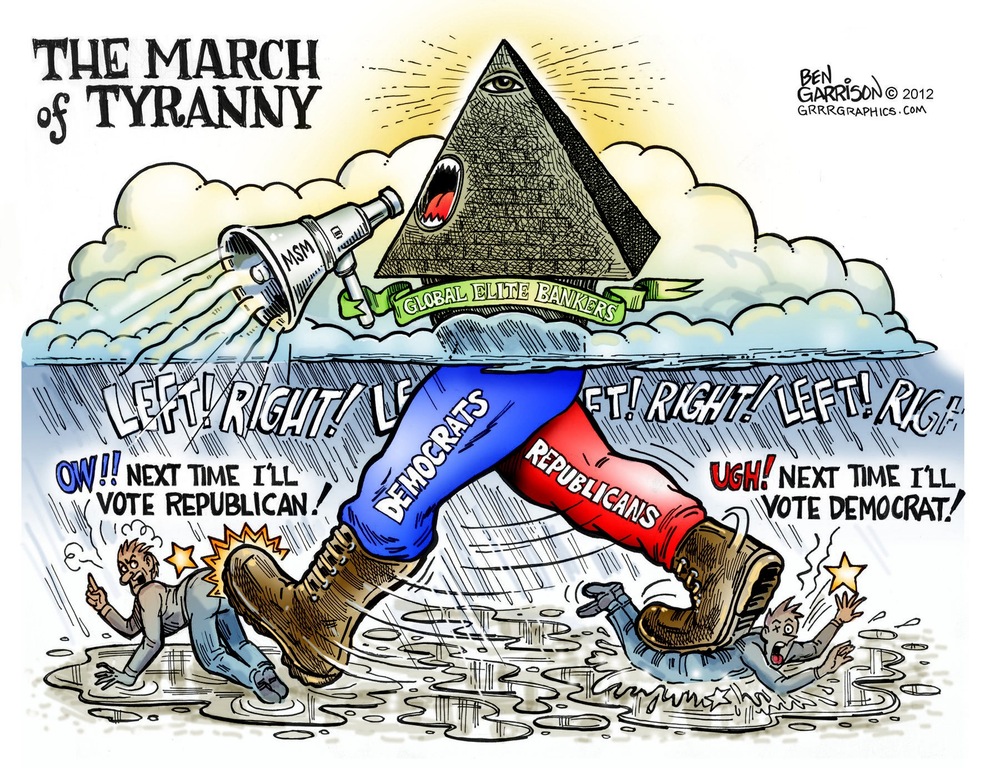 Hegelian Dialectics - A Few Examples From Our Past, Present And Future World
Masonic Jewish bankers use Freemasonry to manufacture
conflict and control both sides.
Thus they frogmarch
humanity to enslavement.
"The Hegelian Dialectic is built around Thesis-Antithesis-Synthesis. The key is to control all three steps without letting people know about it."
by KMG
(henrymakow.com)
Communism is about violent revolution to supposedly empower the working class. Everyone also knows that Communists are master deceivers. Karl Marx stated:  "If one thing is certain, it's that I am not a Marxist".
From this, we can deduce that Marxist Communism is a ruse designed to achieve world domination. The Talmud says that Jews are supposed to become world rulers and all other people (goyim) will become their slaves.
In order to deceive the goyim, the Communists needed a powerful theory to slowly lead the masses into their trap of "One World-One State". Lenin said:  "It is impossible completely to understand Marx's Capital, and especially its first Chapter, without having thoroughly understood the whole of Hegel's Logic. Consequently, half a century later none of the Marxists understood Marx!!"
In order to disguise the fact that the same power has been running the world, they used the dialectical opposites of Hegel to create conflicts between countries, man and woman, rich and poor, races, ethnic groups, religions, political parties etc. Conflicts are necessary to advance the globalist scheme. As long as you control both sides there are no risks.
Terrorism is another useful tool for them since a suitable scapegoat can easily be created and conflict intensified.
TERRORISM
Trotsky said in his book, Communism and Terrorism: "The man who repudiates terrorism in principle.., must reject all idea of the political supremacy of the working class and its revolutionary dictatorship."
In reality, all large scale terror acts have been funded by the international Communist conspiracy against the worldÂ´s countries and people. Each government secretly deceives their own country by letting their intelligence agencies carry out these misdeeds. Terrorism creates the wished for effects: it instills fear in people and they make people deify their government as their only hope for survival.
In return, the globalist ruled national governments will suppress the nations and the people even more. The UN will become the next superpower because the globalists have no other option at hand. All political leaders from now on will pave the way for the UN to take over their country and impose global dictatorship. This is in the prophecies and the globalists are under the yoke of the prophecies.
LetÂ´s take a look at the UNÂ´s openly declared goals. 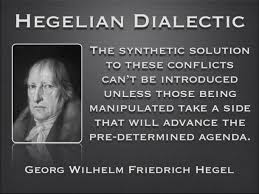 "The task before UNESCO... is to help the emergence of a single world culture. ....at the moment, two opposing philosophies of life confront each other from the West and from the East....  You may categorize the two philosophies as two super-nationalisms, or as individualism versus collectivism.... or as capitalism versus communism, or as Christianity versus Marxism.  Can these opposites be reconciled, this antithesis be resolved in a higher synthesis? ...through the inexorable dialectic of evolution, it must happen...." ( Julian Huxley -- brother of Aldous and a Fabian Socialist)
UNÂ´s power over the US military: Defense Secretary Leon Panetta and Joint Chiefs of Staff Chairman Gen. Martin Dempsey indicated that "international permission," rather than Congressional approval, provided a 'legal basis' for military action by the United States.

(left, Conservatives in denial that both Trump and Hitler = Freemasons.)
The first pan-European 100 years ago, Mr Kalergi, stated openly: "We are experiencing the most dangerous revolution in world history: the revolution of the State against man. We are experiencing the worst idolatry of all time: the deification of the state." --â€‰Richard N. Coudenhove-Kalergi, Totaler Staat - Totaler Mensch (Total State - Total Man)
LetÂ´s look at the conflicting statements of the potential next US President, Mr Trump:
"I am a big fan, a very big fan of the United Nations and all it stands for," once said the man who said at AIPAC on March 20 that the body "is not a friend of democracy, it's not a friend of freedom."
On the one hand Mr Trump trashes the UN and on the other hand he supported it in the past. What is all this about? We have to go to Hegel to check for a reasonable answer. Below, an Hegelian analysis of some famous conflicts: 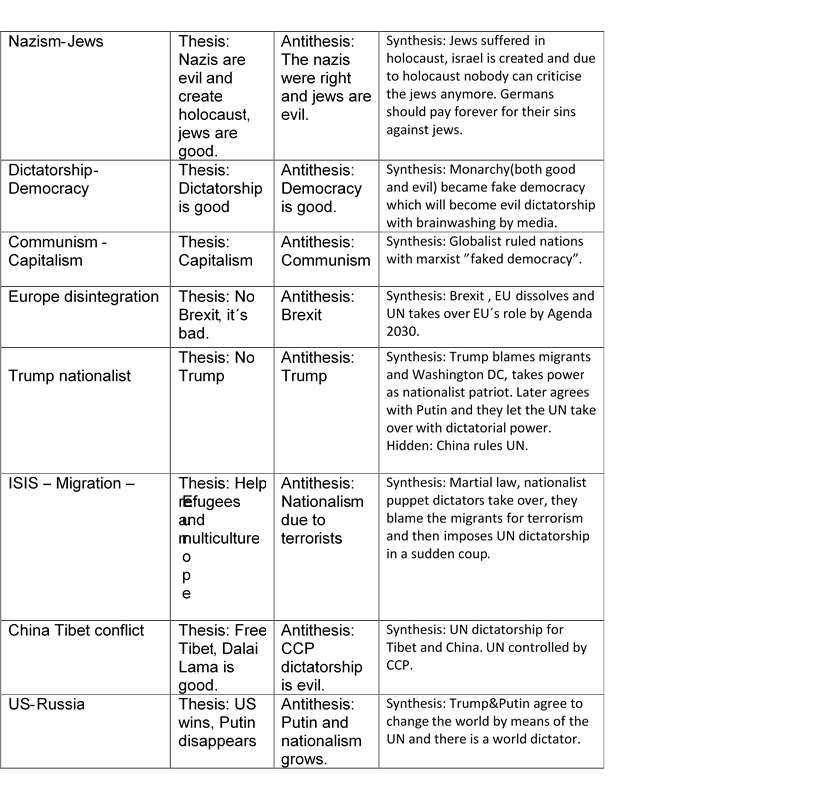 What else can be said? The only hope for the worldÂ´s people is to wake up from their sleep and realize what they are up against. An ongoing centuries-old conspiracy is reaching its prophesied tail-end will try to destroy each human beingÂ´s soul by voluntarily submitting to the Marxist brainwash.
---------
Related- George Soros' Manufactured Conflict
---------- Illuminati Banker Unveiled Method of Control
---------- Libertarianism as Illuminati Dialectic
First Comment from Glen:
The old quote "To understand the present, one must first know the past" has never been more relevant than it is today. If one has no TRUE knowledge of past event's such as "Operation Gladio", it will be very hard for them to see through the fog of deception and lies that are being foisted upon us today.
The use of lies, deceptions, and false flag events is as old as time itself when it comes to tyrannical governments. As I watch the latest "event' unfold I am still in awe of the number of people who swallow the lies hook, line and sinker. These Masonic globalist who run the show have put the pedal to the metal. It is one staged event after another. The green screen queens in the media are working overtime in getting these lies sold and agendas pushed.
If you have not taken the time to study history, there is no way you can have a grasp on what we are seeing today. You will lead by your eyes and ears right of the cliff and into subjugation. Deception is the name of the game and our press and governments are masters of it. In closing a quote from that old "rat smeller" himself Patick Henry: "Is life so dear, or peace so sweet, as to be purchased at the price of chains and slavery? Forbid it, Almighty God! I know not what course others may take; but as for me, give me liberty or give me death!"
A quick description of Gladio- Learn the past to understand the present.

Voting is one of the ways to distract the public from the real issues. All day long on the news programs were hear: He's up; she's down. It sounds like a bad porn movie. In order to really focus on the problem, people should focus on the 10 Planks of the Communist Manifesto. All of the governments of the world have most if not all of these "planks" in place. So the question should be asked of each candidate: "What are you going to do to remove all of the communist principles from the government?" Of course, if that were done, there would be little to no government left.

Communism is great for the communists because they feed off of the backs of the people who do the work. If Donald Trump were the real deal, he would be talking about eliminating the income tax, property tax, central banking and open the market for competing currencies, stop subsidizing agriculture, open up the medical industry for real research, eliminate the inheritance tax, to mention just a few things. I feel like I'm delusional that any of that will happen in my lifetime but I hope for the best. The government as we know it is completely useless to be a benefit to the public-at-large. The communists keep their power by creating the chaos and then coming in the solution which has more government power than it had to begin with. It is extremely disgusting.

Apparently, the people seem to like getting screwed by the government. It is like they keep bending over as if they are inviting themselves to be molested by the govtards. This article was good in showing how the cause and effect works in politics, but if people keep voting for the same idiots, nothing will change but the calendar.

Most people I have met simply do not have the neurological capabilities regarding comprehension of the psychology of the Hegelian Dialectic. The Prussian Education System has been very successful.