British Elites Are Sodomized as Children 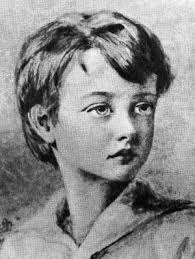 (Oscar Wilde's obsession with an older Lord Alfred Douglas, here aged eight, proved to be his downfall)
British Upper Class was homosexualized while boarding at a fee-paying,
so-called "public school", a unique institution of English origin,
where pubescent upper-class boys were subjected to five years
of boarding, bullying, beating and buggery.
In his Autobiography (1929) Lord Alfred Douglas
said that 90% of the boys
in English Private schools were
sodomized. "I bitterly resent that I was robbed
of my virtue and my innocence by being put into
a community ...compared to hell."  (p. 28)
This article says that this abuse ended at the end
of the last century but I am skeptical.
Read the links at the end. Sodomy is a satanic initiation. The whole British upper classes were captured in this way.
The Goodman History Blog
British Homosexuality 1800-2000
There follows a list of famous British homosexuals and bisexuals of this era (some non-practising), with the schools at which they were educated in parenthesis.

Each was homosexualised while boarding at a fee-paying, so-called "public school", a unique institution of English origin, where pubescent upper-class boys were subjected to five years of boarding, bullying, beating and buggery. New boys had to become aptly called "fags" to the prefects (older boys) who gave them female names to symbolise their sexual role as catamites. Prefects were permitted to enforce their authority by flogging pupils in their "House" ie dormitory. The idea was to prepare them all for a Spartan life, without female company, as obedient administrators of the British Empire. The leading colonial administrator, Lord Lugard, praised the "public school spirit" as essential for British Imperialism.

The side effect was, however, to create a hypocritical double standard in British public life. Homosexuality was imposed on the members of the ruling class during their formative years, but was an imprisonable criminal offence. The homosexual tendencies thus created, if carried on into adult life rendered these unfortunates liable to blackmail an/or ruin (as happened to Sir Anthony Blunt, Lord Alfred Douglas, Oscar Wilde and John Vassall).
In addition, the rigid British social class system was thereby reinforced. Working class people (reared in a heterosexual environment) despised effeminate upper-class "poofs". British police were of plebeian origin. and expressed their class hatred by devoting much time and effort to apprehending patrician "cottagers" in public lavatories and raiding gay clubs.
Worse still, this system destroyed British Intelligence during the 20th Century Cold War. The Soviet Secret Service used homosexual contacts to compromise their closet gay British counterparts, as illustrated by the Cambridge Five in the 1950s and Vassal in the 1960's. The British Secret Service was completely compromised.

This whole sorry system of snobbery, sadism and sodomy developed in the early 19th Century as the public school system expanded to cater for the whole of the British upper and upper middle classes (many of whom had previously been privately educated at home by tutors, eg James Boswell, David Hume and Pitt the Younger). The Butler Education Act of 1944 created further expansion because all middle class parents, whose offspring failed the eleven-plus exam, would scrape enough money together to pay public school fees so as to avoid the dreaded yob Secondary Modern Schools, whose purpose was to produce low-class, half-educated factory fodder.

By 2000, thankfully, the system had all but died because in the late 20th Century corporal punishment was abolished, co-education introduced into most public schools and the British Empire dissolved.
The whole sorry scheme of indoctrination into authoritarian homosexual elitism, administered by sadistic, paedophile schoolmasters, thus became a dark closed chapter in British history. One can, therefore, now read old novels about it (such as Tom Brown's School Days and Billy Bunter) with disgust, instead of admiration.
This is why modern films of those books omit the caning and homosexual scenes, so as to try to make them palatable to modern audiences! Nonetheless, old reputations,  linger on; in France, homosexuality is called "Le Vice Anglais". In addition, people educated at fee-paying schools still enjoy a monopoly of all senior positions in Britain, but that is a different story.
--
Related - Homosexuality & Demonic Possession
------------Freemasonry's Best Kept Secret - Ritual Sodomy
------------Gays Admit they are Sick
----------- Are Homosexuals and Communists Natural Allies?
----------- Sodomy is an integral part of Satanism
------------Sodomy Key to Mind Control, says Deprogrammer
------------Freemasonry's Secret Homosexual Agenda
First comment from George-
Don't forget Lord Mountbatten, disrespectfully nicknamed "Lord Mountbottom." He reportedly raided Irish orphanages for fresh meat, and there is a theory that the explosion that ripped apart him and his yacht was executed by the IRA in revenge. Prime Minister Edward Heath had a bad reputation in this regard. Baden-Powell's creation of the Boy Scouts suggests that this element was in that institution from the start, rather than being a recent aberration.
Makow- Winston Churchill was also a homosexual. So was Adolf Hitler.