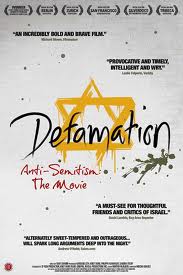 After giving the filmmaker considerable access, ADL Director Abe Foxman suppressed this film because it revealed there is precious little anti Semitism, certainly not enough to justify the ADL's 29 US offices, annual $70,000,000 fund raising, and  Foxman's $527,000 salary.


I would tell young Jews that Israel was the cause of the holocaust, not the other way round.

Yo'av Shamir's 2009 documentary  on anti Semitism, "Defamation," demonstrates that Jews are prisoners of Zionism as much as Palestinians and the rest of the world.

I found it painful to watch young Israelis being put in mental cages. They steel themselves in fury against the world as they watch Holocaust atrocities and are taught that Jews are universally hated for no reason. On a trip to Poland, they actually play-act being hunted by the Nazis.

As a Jew, I love my fellow Jews who have been duped and betrayed. I too was brainwashed, taught that Israel is an "insurance policy" in case of "irrational hatred" from our Gentile neighbors. Amazing how few Jews question this ruse.

I would tell these kids that Israel was the cause of the holocaust, not the other way round. In the 1930's, only one percent of German Jews were Zionists.  Half of all German Jews intermarried. The Rothschilds financed Hitler in order to transfer these Jews to Israel, the linchpin of their New World Order. The Zionists worked hand-in-hand with the Nazis.
Jews are "hated" because many are being used to inaugurate Rothschild's satanic plan for world tyranny.
If Jews want to understand their true position, they must realize that organized Jewry is not on the side of the angels and probably never was. It serves the pernicious agenda of the cabalist bankers. Thanks to Freemasonry, almost all non-Jewish organizations in the West -- political, economic and cultural -- have also been subverted. 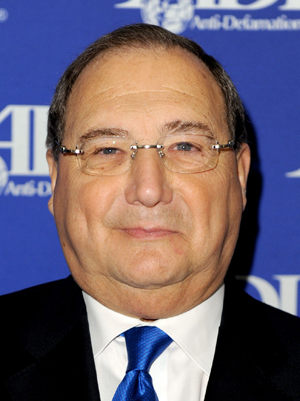 After giving the filmmaker considerable access, ADL Director Abe Foxman, left, suppressed this movie because it revealed there is precious little anti-Semitism, certainly not enough to justify the ADL's 29 US offices, annual $70,000,000 annual fund raising, and  Foxman's $527,000 salary.

Most non-Jews can distinguish between organized Jewry and the Jewish dupe on the street. Thus, in the film, the ADL was hard pressed to come up with instances of anti Semitism. Some Black kids threw stones at a school bus; a cop was overheard making a disparaging remark; a Jew couldn't take off a Jewish holiday.

The ADL are psychological thugs whose purpose is to portray any opposition to Israel and the New World Order as racism. For example, there is plenty of evidence that 9-11 was a Mossad-CIA false flag. The function of the ADL is to squelch this line of investigation.

According to a report by Lyndon Larouche's Executive Intelligence Review, the ADL is a lobbying and intelligence arm of the Rothschilds.

THE HOLOMODOR (LITERALLY "KILLING BY HUNGER")
If Abe Foxman is an indication, anti-Semitism is caused by the behavior of Jews like Foxman. The most appalling scene shows Foxman leading a delegation to Kiev where he lectures a Special Adviser to President Viktor Yushchenko.

Foxman doesn't want Ukrainians comparing the 1930's famine death of more than ten million Ukrainian farmers with the "Holocaust." The Jewish holocaust is absolutely unique and there can be no equating of the two. 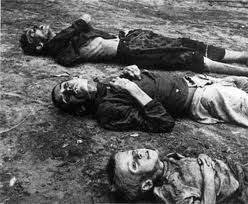 Consider how galling this must have been to him. The Holodomor (literally "killing by hunger") was instigated by two  Communist Jews, Josef Stalin and Lazar Kaganovitch. Official lists released in 2009 show that almost all the Communists who caused the Holodomor were Jewish. ( Jewish groups wish to obfuscate that fact.)
Shimon Peres, the president of the State of Israel, would later advise Ukrainians to "forget history."
Imagine if the Nazis had won the Second World War instead of the Zionists. Imagine a delegation of rich Nazis visiting Jerusalem today and demanding that the Jews stop referring to the slaughter of European Jews at Nazi hands as a "Holocaust."

The Nazis say: "Stop comparing your genocide to the real genocide: The massacre of 250,000 innocent German civilians in the fire bombing of Hamburg and Dresden."

Surely this inability on the part of many Jews to see our common humanity, to be objective and honest, to see the other man's viewpoint is a major cause of anti Semitism. It seems to originate in the Talmudic attitude that non-Jews are not human.

Why is the holocaust franchise so important to organized Jewry? "Guilt" is the shield behind which "Zionists" are used to enslave the world. Members of the ADL delegation admit in the film, we "play on that guilt." Or as a former Israeli cabinet minister admitted, "Anti Semitism is a trick we always use."

The film illustrates how naive many ADL officials are about their true role.  They opened up their operations to this Israeli filmmaker expecting to be portrayed as heroes.

Foxman coyly denied the ADL has special power. "The perception of the power of the Jew is one of the signs of anti-Semitism," he says. [Foreign officials] truly believe we can make a difference in Washington. We don't want to disabuse them!"

The film contains an excellent portrait of Professor Norman Finkelstein who is a true Jewish hero. The ADL's obsession with anti Semitism is "pathological narcissism," he says. "The Jews are the richest most successful ethnic group in the USA."

Finkelstein, the author of the classic "The Holocaust Industry" (2000), was fired from academia and banished from intellectual life due to Jewish pressure. He took Israel to task for its treatment of Palestinians.  He calls Foxman a thug and compares him to Hitler, saying, "at least Hitler didn't do it for the money."

Like all cultural works today that reveal the truth, this film was suppressed by the Zionists.

According to Wikipedia, "After the film was screened at the Tribeca Film Festival, the Anti-Defamation League issued a statement denouncing the film, stating that it "belittles the issue (of anti Semitism) ... and cheapens the holocaust. It is Shamir's perverse, personal, political perspective and a missed opportunity to document a serious and important issue."

New York Times reviewer Neil Genzlinger states that while these ideas deserve a thorough and dispassionate discussion, Shamir has not provided it in this film. "...it feels like just another day on the Op-Ed page."

The documentary cost about $1.4 million to make. It grossed $17,000 in theatres. This illustrates how not only Jews, but all of us are held prisoners by the Zionist control of culture. So much for our pretensions of freedom, academic and otherwise.

Throughout history, anti Semitism was often organized by the Illuminati, (i.e. Zionists) as a way of manipulating Jews. Now false flag terrorism is used to manipulate everybody.

One of the guides on the teenagers' tour of Nazi concentration camps in Poland said he had reservations about perpetuating this "death industry."

That statement will apply to us all, as long as we remain prisoners of Zion.

he House of Rothchild funds both sides of the wars, like WW1and WW2 to make sure there is plenty of goyim blood spilled. They just sit back and watch the "duped goyim" destroy themselves.
They also control the propaganda through the MSM in order to create public sentiment for these wars.

The "Holocaust" is fixed at the number of 6 million, regardless of any evidence to the contrary because it supposedly says in one of their own "Torahs" that they couldn't return to the Holy Land until 6 million Jews were sacrificed by fire which is the definition of the word holocaust, "death by fire". I'm not saying that this is true, but it might help explain a lot of the strategy behind it.
It's also interesting that the number of 6 million Jews being persecuted in Europe was being propagated by the American MSM before WW1.
The truth, facts, and realities of this hypothesis are naturally considered "anti semetic" because the truth always exposes a political agenda.

The "Holocaust" will continue to be defined and controlled by the ADL for whatever their political agenda mandates at the time. The "guilt psyop" that is attached to this has been so successful and effective that I don't think they will be revising their strategy anytime soon or letting any evidence change their definition.
When you control World Media, World Banking, and World Intelligence, you then control the World.

What's also disgusting is how thorough the blackball works in academia. Finklestein can't even get a lecturer slot in Timbuktu.

They've been jamming him out to break him. I think they'd have liked to see him crack like Bobby Fischer, so they could make a documentary to say "see? He was crazy all along." Obviously he'll never break.

Being articulate helps. As long as a man can speak his thoughts clearly, they can't trip him up and make him sound like a fool.

I hope you'll mention that it's us, the public, that let braver men down by forgetting about them. This country is finished, because everybody down here admires the big strong criminals instead of the righteous. I've never been to Israel but that seems to be true there too. It's in human nature, unfortunately.
These nations are on their way to utter destruction. I think Finkelstein understands that, and that's what he's tried to prevent.

Your latest article is well informed. Read a book entitled The Holocaust Violence by Adnan Oktar, it can be downloaded in pdf format from his site www.harunyahya.com. The book is an easy yet highly informative read, and pretty much sums up everything you have been saying about the collaboration between the nazis ad zionists during WW2.

Keep up the excellent work Henry