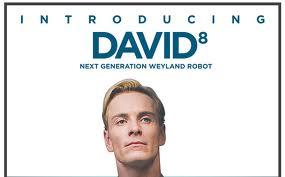 "The Eighth Generation David has no fear of the Goyim. In fact he does not identify with the experimental cattle. His intellectual abilities are literally super-Human. His only higher-ups are the beings who call the ultimate shots."


Prometheus continues the process whereby reality is replaced by occult fetishism, and humanity is further uprooted from truth.

In Ridley Scott's new movie "Prometheus", there is only one name that requires our attention:  David.

David is a Jewish name, yes. David was King of the Jews. It's been said that the Illuminati have planned to produce a sort of Messiah figure, of the House of David, as the NWO reaches completion.

Within the space of this film, David's verbal statements ARE obviously and distinctly historically Jewish, reflecting biological alienation, commercial savvy, assimilation, conflict with outsiders, an awareness of an unique position, disillusionment with the emotion-based religions of humanity in general, and an intense will to survive.

His behaviors and chosen appearance are clearly meant to reflect the planned and careful combination of Jew and Gentile that produced the Nazis, the soulless medical human experimentation of Josef Mengele, the Aryan ideal... The Illuminati.

His verbal exchanges acknowledge that David is NOT The Jew You Know Next Door, but rather the Illuminist Jew which has used the rest of the Jews, and Israel, in furtherance of its own aims of total global domination. 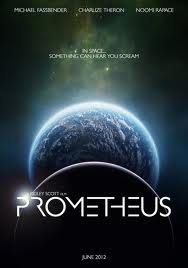 Before commenting further on David, let's summarize the plot of PROMETHEUS:

A small group of human archaeologists discover an astronomical map featured in the crude cave paintings and stone carvings of multiple ancient human races. The star map points to the possible location of a race of beings who may have "created" the human race.

The archaeologists head out to the stars in a vessel named the USS PROMETHEUS, to meet their Makers. They wind up on an abandoned moon that had been a military base belonging to white-haired giants who possess "human" DNA.

The bio-genetic weapons stockpile of the giants points to their eventual intention to destroy Earth Humanity completely, and for reasons unknown. The question:  Why did they create us, only to decide to destroy us? This question is left unanswered.

ARE THE ILLUMINATI INVOLVED WITH THIS PROJECT?

We know it IS an Illuminist project because the title of the film is PROMETHEUS. The tale of the god Prometheus, who first brought fire, technology and knowledge to Earth Humanity, is a regularly repeated Illuminati motif.

So is Pandora's Box.

The Illuminati see themselves -- and Lucifer -- as the real-world version of Prometheus, the Bringers of Knowledge, Light, Technology, and Music. According to myth, Prometheus was punished in eternal Hell for his contributions.

Consider the following dialogue taken from this film [paraphrased here].

"That fire was a gift Prometheus stole from the gods. Prometheus was caught and 'brought to justice', because he gave us fire, our first true technology... But now it is time for him to rise again."

Prometheus is rising again? That WASN'T part of the original myth, but anyway, we can understand at least this much: The ILLUMINATI are planning to resurge. The connection is clear.

But even given all of that, the title of the film appears to have only a rough connection (if any) to the PLOT of the film itself.

Let's turn back to David:

David is an immortal android possessing astonishing mental abilities. He pilots the USS PROMETHEUS while the "normal" biological human crew sleeps. Using advanced instructional databases, he teaches himself to understand and conjoin the linguistic elements of dozens of ancient languages (read: Babel). When the archaeological explorers DO, ultimately, meet their imagined "makers", their genetic forerunners, (a fact NOT firmly or finally established by the film), David is the only one amongst the explorers who can communicate with the aliens.

There is MORE to David than this, and this is where our focus lies.

He's cold and soulless. He's White, wiry, cunning, and strong. He uses deep technology to observe and absorb the most intimate dreams of the sleeping humans on the ship Prometheus.

He conducts covert and viciously destructive biological experiments upon certain members of the crew, following his discovery of alien genetic bio-weapons.

In his own cold android way, he "admires" the homosexual pedophile figure of T.E. Lawrence (i.e., Lawrence of Arabia) and he dyes his hair blonde to make himself look more like Lawrence.

Within his mechanical soul there is a powerful node of resentment against the fact that he was created solely for purposes of human convenience. 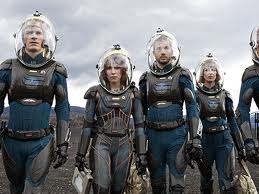 Promotional material for this film (imdb.com) included simulated advertisements and commercials hyping "David8", the latest generation of android offered by the Weyland Corporation. (Side Note:  Eight Centuries have passed, since the original issue of the Zohar of Kabbalah).

David: Hello. I'm David.
Interviewer: What can you do, David?
David: I can do almost anything that could possibly be asked of me. I can assist your employees. I can make your organization more efficient. I can carry out directives that my future counterparts might find distressing or unethical. I can blend in with your workforce effortlessly.

Interviewer: David, what makes you sad?
David: War, poverty, cruelty, unnecessary violence. I understand human emotions, although I do not feel them myself. This allows me to be more efficient and capable, and makes it easier for my human counterparts to interact with me.

What do we get out of this? A general take-down of the historical material of Jewish Human Being. In most senses, David's statements are delivered as a clear observation of the Diaspora Jew, or even the contemporary radical Jew.

What we must not forget is that this is the Eighth Generation David. At long last, he has no fear of the Goyim. In fact he does not identify at all with the experimental cattle. His intellectual abilities are literally super-Human. His only higher-ups are the beings who call the ultimate shots.

Eighth-Generation David is arguably no longer Jewish. He is a combination being. He performs the tasks asked of him, only in order to insinuate forces of manipulation and subversion.

There is a scene where David, ALONE, discovers and activates a navigation console that projects holograms of the known universe. David sights a holographic representation of the Earth. He seizes it, in both hands, and holds it close to his face.

HE'S GOT THE WHOLE WORLD IN HIS HANDS.

In the film Prometheus, at least, "He" doesn't mean "Jesus".

I have just read the analysis by â€œAspenâ€ emphasizing the Illuminati influences behind the recent movie â€œPrometheusâ€. While the information was enlightening, I was however very disturbed by â€œAspenâ€™sâ€ defamation of T.E. Lawrence. Although the question of Lawrenceâ€™s homosexuality has yet to be established with any certitude, the fact that he was not a pedophile has. If â€œAspenâ€ is indeed asserting that T.E. Lawrence was a child sexual predator I am hoping he can provide the requisite sources/documentation for this libelous and patently fallacious statement. There are absolutely no reliable references in support of that allegation and I am certain had â€œAspenâ€ completed even a modicum of genuine biographical research he would have reached the same conclusion.

Mr Makow, in the interests of your websiteâ€™s credibility and accuracy please edit out the pedophilia insinuation in an otherwise thought provoking and entertaining article. Again, please do justice to T.E. Lawrenceâ€™s memory. Yes he had personal â€œissuesâ€ who doesnâ€™t, but pedophilia was not one of them.

Please correct me if I am wrong but isn't homosexuality about pedophilia? That is not to say every homosexual is a pedophile, but a great many are. See Jerry Sandusky for eg. See also articles linked below:

WITH RESPECT TO T.E. LAWRENCE

Thank you for your impassioned input.

The sexuality of T.E. Lawrence was not conventional, including a general abstinence from heterosexual relations, as well as a masochistic streak. Other features of his life and character were sufficiently suggestive of homosexuality to justify admiration by such established bisexuals as Alec Guinness.

Whether or not Lawrence was a pedophile, the film PROMETHEUS presents us with a futuristic version of the man, and he IS therein portrayed AS A SEXUAL PREDATOR. The android David, DRESSED UP AS LAWRENCE, uses a biological weapon to introduce a genetic chaos factor into the sexual relations between the central female character and her husband. This results in the woman being impregnated with a destructive alien organism. Rather than assisting the woman with removing the evil being in her womb, David attempts to manipulate her into voluntary cryo-stasis. He knows this will lead both to her death, and to the preservation of the evil in her belly. David is a predator in general, sexually and otherwise.

Sexual predator. Pedophile. What's the difference? If you object to T.E. Lawrence being cast in this light, you had better get on the horn to Ridley Scott and ask him to provide "sources and documentation" for this "libelous and fallacious statement".