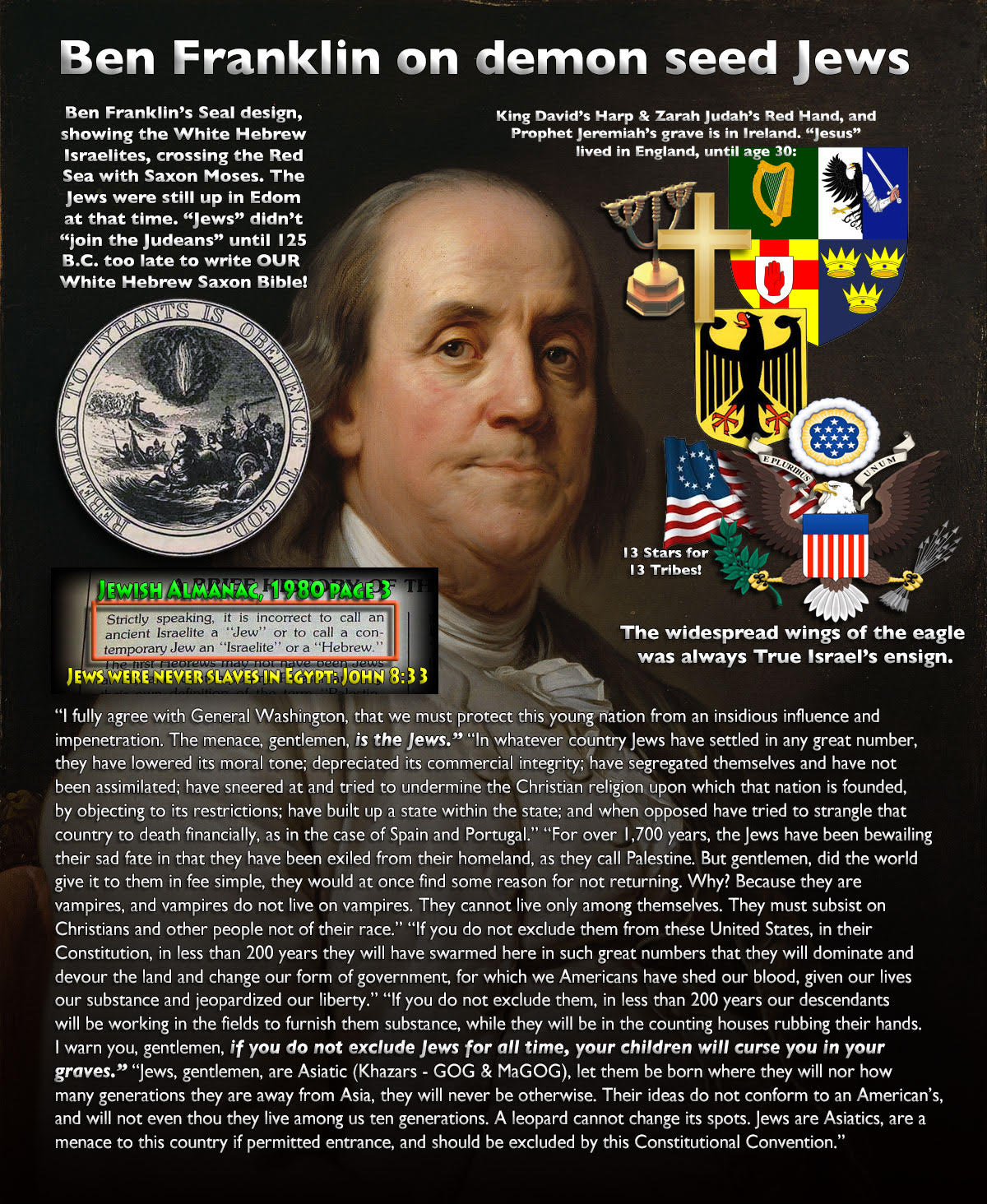 How do we reconcile this condemnation of Jewry with the fact that Springmeier says Franklin was a crypto Jew himself?
How do we reconcile it with the fact that Freemasonry is Cabala Judaism for Gentiles? Could it be that Freemasonry is hiding behind the skirts of antisemitism and this is why they stoke it?  Take the Mason Henry Ford as another example. Why do we rarely hear Freemasonry mentioned as subversive traitors  but Jews are on everyone's lips?  Why was Trump never confronted for his constant Masonic hand signs? I agree with E Michael Jones that Organized Jewry is the enemy of humanity. But even Jones rarely mentions Freemasonry. Nor David Irving.  Freemasonry represents Sabatean (Satanist, Cabalist) Jews who have always been at war with Torah or assimilated Jews.
by Fritz Springmeier
(henrymakow.com)
A very famous Jewish Mason, born in Boston to descendants of the Puritan tradition is Benjamin Franklin. His father and mother were
Josiah and Abiah Franklin. Benjamin Franklin contributed to the Mikveh Israel Jewish congregation in Philadelphia.
55. Friedman, op. cit. (Jewish Pioneers &  Patriots),   p.125
But Franklin did not practice Judaism. He did practice the occult, and things that would be weird to Christians. He became the head of the very occultic Grand Orient Freemasons when he was in France. Franklin's life was surrounded by Freemasons. Franklin's role in the establishment and promotion of Freemasonry is overwhelming. His role in the destruction of Christianity is quite unknown.

Franklin's career as a Freemason is shrouded in mystery. This Author has the somewhat rare book Benjamin Franklin as a Freemason by Julius Sachse (J.F. Sachse is the last of a line of Sachses in the World Order.) This leading Masonic scholar writes, "To write the history of Franklin as a Freemason is virtually to chronicle the early Masonic history of America....A great difficulty, however, here confronts us, notwithstanding the prominence of FRANKLIN in Pennsylvania Freemasonry; strange as it appears, he does not mention a word of his Masonic connections or career in his Autobiography, or in any of his correspondence, with but two exceptions, so far as known.
This omission is the more remarkable when we look at his Masonic career while in France during the later years of his life. There, his activity and intimacy with the Brethren was intimate and close, both personal and official, FRANKLIN taking an active part in their proceedings, even advancing to the so-called higher degrees."56 In spite of all his many duties, Benjamin Franklin was "never absent from a [Masonic] meeting."57
If Masonry is so virtuous, one wonders why it plays no role in his autobiography which was written on purpose to create an image worthy of emulation.
Benjamin Franklin was the founder of the American Philosophical Society.59 He was also a Rosicrucian.60 In Feb. 1730, it appears he was initiated into St. John's Lodge of Philadelphia.61 And in 1727, he started the secret revolutionary political society called the Leather Apron Club which changed its name in 1731 to Junto, and took on the appearance of being a literary society.62
The same year that this "literary" society changed its name, the St. John's Masonic Lodge that Franklin belonged to got in touch with the Grand Lodge of London whose Grand Master the Duke of Norfolk appointed Daniel Coxe. Daniel Coxe advised the Masons when he arrived of a plan for the federation of the colonies.63  In 1754, while deputy Grand Master, Franklin unveiled at Albany, NY to his brother Masons his plan to unite all the colonies under one government.64 Albany was the site of one the earliest Scottish Rite's Lodge of Perfection.

Between Jan 21, 1769 and Jan. 21, 1772 a series of inflammatory letters called The Letters of Junius, which were written in England, were circulated through out the American colonies. The letters advanced those causes that the colonists would declare to be the causes of their revolution, human rights, freedom of the press, and taxation without representation. The letters were read by Franklin and many of the Masons who initiated the American Revolution. The man who wrote these letters according to his niece,  was the Reverend James Wilmot (1726-1808) a Mason and rector of Barton-on-the-Heath, in Warwickshire in 1785. He also was the first person to publicly name Bacon as the author of Shakespeare's works.65 He also apparently was in contact with the Lodge of Nine Sisters in France that Franklin would join in 1777.66

"Historians have never ceased to wonder at the enormous psychological influence which Franklin exercised in colonial politics. But up to the present day, few indeed are those who have realized that the source of his power lay in the secret societies to which he belonged and which he was the appointed spokesman."67

Independence Hall which became the famous center of the Revolution was built by the Masons. It is believed by some that the Mason Benjamin Franklin laid its cornerstone, others say it was another Freemason instead.

Some of Franklin's Masonic brothers in France were impressed by the rituals, etc. that he thought up for a new religion. Turning our attention to a different aspect of Franklin's, in a statement of beliefs Franklin states, "I conceive then, that the INFINITE has created many beings or Gods... It may be that these created Gods are immortal; or it may be that after many Ages, they are changed, and others Supply their Places."68
Not only were Franklin's beliefs not Christian, but in the later years of his life all the Christian standards were violated, so
that it is really a travesty of honest reporting, that Franklin is held up by so many as a role model for Protestants. The distortions in the popular history books about Franklin are but a microcosm of the distortions that history books in general suffer from...

--
Related- The US Was Masonic (Satanist) From the Get-Go

I cannot remember where it was written but in the late 1950s, early 60s, all us "patriot" types knew for a certainty that Franklin practiced, at least once, the satanic mass, and it was done in the O.T.O., Gross-Orient, in later times a favored haunt of Aleister Crowley. In fact it was our knowledge that all Franklin's anti-Christian worship took place in Europe, both France and England.

Franklin seemed to like going to France specifically for his connection to the O.T.O. perhaps because it was/is? a phallic outfit. Much about the O.T.O. in Occult Theocrasy, the Edith Starr Miller (Lady Queenborough) research of the occult done over ten years time by this American lady (whose Jewish English lord husband had her murdered for publishing) and Paquita de Shishmareff (whose name was kept off as her connection to her Waters Flowing Eastward was already talmudic Jew-poisoned to the public).

On your concern that "Jewry" is always a mention but never "masonry," here is the last paragraph (p.466) of the short chapter on B'nai B'rith form that 1930s book:

"There is little doubt now that the B'nai B'rith seems to be the supreme body, shaping and directing for the attainment of its own ends, the policies, whatever they may be, of all Freemasonry beginning with the Grand Lodge of England, The Grand Orient and Scottish Rites, and ending in the O.T.O., which is Illuminism under another name."

As a Franklin scholar, I write to offer correction to a few of the mistakes I found on your webpage titled "Benjamin Franklin -- Freemason and Jew".

Benjamin Franklin possessed no Jewish ancestry (not that such a thing would be shameful). Franklin had no recorded ancestors with surnames common among Jews, nor any record of the practice of the Jewish religion or customs in the households of any of his forebears. His patrilineal ancestors are documented as far back as his great-great-grandfather, one Thomas Francklyne, born in about 1540 in Northamptonshire. This Mr. Francklyne was recorded as possessing a Christian English Bible (i.e., a Protestant Bible), which he took great pains to hide during the bloody assizes of the Catholic Queen Mary. Franklin's mother, Abiah Folger, was of English ancestry and likewise not of Jewish roots.

Your page states "Benjamin Franklin contributed to the Mikveh Israel Jewish congregation in Philadelphia." Indeed, in 1788 he donated 5 Pounds towards the construction of that congregation's new synagogue, but that is the only donation he is ever recorded as having made to any Jewish group. What your page does not mention is that Dr. Franklin contributed to a great number of congregations, including Roman Catholic, Calvinist and Quaker. Indeed, Franklin could be counted on to donate to the fund for the construction of any new house of worship in Philadelphia, since he believed that any such structure had a beneficial effect upon the community at large. And 5 Pounds in 1788 was the equivalent of about $680 in today's money; a pittance to Franklin who, at the time, had a fortune worth the equivalent of several million dollars today.

Your page goes on to state "(Franklin) did practice the occult, and things that would be weird to Christians." I suggest that that many of the things that Christians routinely practice -- say, the drinking of their god's blood and eating of his flesh, the genital mutilation of infant boys, the veneration of the virgin mother and her chaste 33 year-old son -- would be considered "weird" by many people of other faiths.

Finally, it states "(Franklin) became the head of the very occultic Grand Orient Freemasons when he was in France." This is nonsense. First, because there has never been an organization called the "Grand Orient Freemasons", and even if one were speaking properly of the "Grand Orient de France", the fact remains that Franklin was never the Grand Master of the Grand Orient de France, nor did he serve in that body in any capacity. He did belong to the Lodge known as Les Neuf SÅ“urs, and served as its Master for two of the six years that he was a member, but Les Neuf SÅ“urs was just one of hundreds of Lodges in France which operated under the umbrella of the Grand Lodge de France.

There are many other distortions and half-truths reported on your page as well, but above are perhaps the most egregious. Your site's credibility would be improved by correcting at least these, and you would have my gratitude as well.

states:
'A very famous Jewish Mason, born in Boston to descendants of the Puritan tradition is Benjamin Franklin. His father and mother were
Josiah and Abiah Franklin. Benjamin Franklin contributed to the Mikveh Israel Jewish congregation in Philadelphia.'

Beyond that, you provide no argument that Franklin was of Jewish ancestry.

I note another source at:

reads:
'He told his daughter Sarah to attend church every Sunday, but that he didn't care which one she chose to attend. At one time or another Franklin gave money to every church in Philadelphia. He owned a pew in the Episcopal Church, he built a church for evangelist George Whitfield when he came to Philadelphia, and he contributed to the building of the first Jewish synagogue.'

Thus it appears to me that Franklin's donation to Jewish causes was not due to ethnicity.

I will continue looking for evidence linking Franklin's ethnicity to Jews, but for the moment I think you have published speculative guesswork as if it were confirmed fact.

As part of your continuing research, please read "Wise as Serpents.."

The fact that Springmeier regarded Franklin as Jewish is significant enough. But I agree, he should have provided more evidence of ethnicity.

Sabbatean Jews disguised their identity and their loyalties. Franklin was the head of the Jewish dominated Grand Orient Lodge of Paris. The book outing him as a Jew was by a prominent Mason and Jew. It has been suppressed.