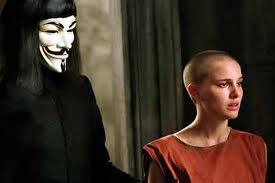 left, a scene from "V is for Vendetta" -- "The most blatantly honest Illuminati project I have yet viewed."

by Aspen
(The author is a former professional movie critic.)
(henrymakow.com)


The Illuminati exert influence in popular visual media to an extraordinary extent. Every major film script that is in pre-production mode is submitted to key Illuminati subordinates whose role is to assess the script for potential alterations or insertions. These changes may be major or minor, depending on the material of the script.

Additionally, these subordinates comprise a tightly managed think tank which surveys the progress of Illuminati propaganda in global societies. The members make decisions about which themes are ready for further amplification in popular media. Then, detailed descriptions of desired creative projects are handed down to a further subordinate (but not necessarily knowledgeable) group of highly skilled writers, who create the scripts for these projects.

Different projects are created to target different sectors of the global population. That may seem logically obvious, but it's worth stating. Grossly blatant Illuminati messages are more often couched in films of excessive violence, sexual content, outright weirdness, and so on, in order to distract viewers from the fact that external ideas are being inserted forcefully into their minds.

Actually, that's not quite right:  excessive violence, and such, activates a psychological openness to the receiving of ideas. The explanation for this is that once a viewer makes the decision to ACCEPT the violence and the sex, and so on, his or her mind remains open to the ideas that the film is meant to insert into their minds.

Very often,  the decision is made not to insert any open messages into film projects. This is due to two very simple rules:  too much openness exposes the process; and, gradual influence is far more powerful and effective in the long run. In the event that no open messages are going to be inserted, two other options remain which still allow for gradual influence to build.

The first is Signature Symbology. The Illuminati have, over time, generated a huge set of symbols and visual icons which, in partnership with the more blatant messages, exert an impressive (some would say frightening) measure of influence on public thought.

These are the Signatures of Illuminati interference in a project. When viewers see a symbol inserted into a film, this event draws up memories of past encounters with that symbol, and of any messages or themes attached to that symbol.

This is often what some people call an "unconscious" or "subliminal" process. I call it "unreflective", for the simple reason that most people are just not paying any attention to the influences that affect them deeply.

Of course everyone wants to leap on the "Illuminati eye" as a blatantly repetitive symbol these days. That's a misguided judgment, and I'll get to that part soon. An example of a less obvious Signature Symbol is the gargoyle. Any film or other production featuring even brief glimpses of gargoyles is announcing that it has the Illuminati stamp of approval.

The second option is influence over the music attached to a project. Film music - well, music in general - holds a powerful influence over viewers and listeners. Similar musical themes across various projects excite unreflective (or subliminal) memories even more deeply than do visual symbols.

The most blatantly honest Illuminati project I have yet viewed is V for Vendetta, directed by James McTeigue, left,   starring Natalie Portman and Hugo Weaving. By the way, all three of these people are key production elements in major and obvious Illuminati film projects. (McTeigue also directed The Matrix (1999); Matrix Reloaded (2003) Star Wars - Attack of the Clones (2002)

This film was set in Great Britain, but it contains multiple Illuminati admissions of direct responsibility for events which have already occurred in the United States, and in the U.K., including both the destruction of the Twin Towers and the subway bombings in England. There are also announcements of future plans. Civil war in the U.S. is a feature element, as is the use of viral infection, over nuclear warfare, to reduce the population. To paraphrase: "Nuclear war is irrelevant in a world where a virus can destroy an entire population while leaving its treasures intact.

There is a scene in V for Vendetta where the central figures of the film, a man dressed in black and wearing a smiling mask (a Guy Fawkes mask, you can look it up, or watch the film), and a woman named Evie (after Eve, the symbolic Mother of Humankind), perform the following exchange:

Evie:  How strange that I suddenly see your face everywhere.... I don't understand.
V:  What?
Evie:  How you can be one of the most important things that has ever happened to me, and yet I know almost nothing about you. I don't know where you were born, who your parents were, if you had any brothers or sisters... I don't even know what you really look like.
V:  There is a face beneath this mask, but it's not me. I am no more that face than the muscles beneath it, or the bones beneath that.

This is Illuminatis' admission that their public representation of themselves is a very deliberate sham. They have intended all along to keep their membership, their ultimate intentions, and their core character as hidden as necessary. Therefore, if we examine what they present in overly forceful ways, we can discover what they are not. Conversely, if we examine their more subtle touches, we can discover what they are willing to admit to - that is, what they MUST admit to, in order to build the future they have planned for Humanity.

Here we come to the issue of SEEDING. This is it. This is what Illuminati influence in public media is all about. The Illuminati are - like it or not - causing and controlling change, globally, but they are not doing that only by means of instigating economic crises and violent international conflicts.

The Illuminati are seeding the public with notions that gradually grow larger and more influential over time. They did it with Feminism; they did it with flexi-sexuality; they are doing it with anti-religion and with child sexualization now. They do this because the future society they have planned must be structured differently from what we all know now. A different structure requires citizens with different thinking who will accept that structure.

To be Continued Tomorrow

I'm not to impressed with this article at all. It's very general and the term "Illuminati" has become a generic label that is almost meaningless. Who owns and runs the media? Jews (elite) do, so there isn't anything mysterious about who is actually behind this mass manipulation via Hollywood or other mainstream sources. Just like the Bolshevik "revolution", the civil rights "movement", and the Fabian socialism used to change American values by way of entertainment, it all leads back to the Zionist Jews.

They want a watered-down society and preach their message of tolerance and equality because it weakens our nation and strengthens their hand. Then you have The Order, who is responsible for dumbing down the American educational system, which has left the populace fat and ripe for social engineering. These two groups combined have done quite a number on all of us.

Watch a few episodes of the hit cable television series "True Blood" for a massive dose of New World Order propaganda. That show attacks Christianity constantly, pushes the acceptance of homosexuals and their lifestyle and portrays anyone who thinks contrary to these views as stupid and hateful.

The sex and violence are available in ample quantities as the real message is preached to the mindless masses. At this point the whole thing (lower level) happens all on its own. There isn't any need to direct the writers and producers, they have been brainwashed and will churn out this garbage all on their own because it sells. Just as the masses police themselves and take part in group think so do the pseudo-intellectuals of Hollyweird, all the while congratulating themselves on their ""creative genius".

I'm not saying that specific scripts aren't written and produced to purposely set us up for future atrocities, only that the pool of "talent" doesn't have to be molded or convinced to do their master's will at this point.

Let's face it, America is done, the world is on a crash coarse with prophetic destiny and no man can stop this onslaught.

â€œThe Vision and the Voice, the attainment of the grade of Master of the Temple was symbolized by the adept pouring every drop of his blood, that is his whole individual life, into the Cup of the Scarlet Woman, who represents Universal Impersonal Life. There remains therefore (to pursue the imagery) of the adept â€œnothing but a little pile of dust.â€ In a subsequent vision the Grade of Magus is foreshadowed; and the figure is that this dust is burnt into â€œa white ash,â€ which ash is preserved in an Urn. It is difficult to convey the appropriateness of this symbolism, but the general idea is that the earthly or receptive part of the Master is destroyed. That which remains has passed through fire; and is therefore, in a sense, of the nature of fire. The Urn is engraved with a word or symbol expressive of the nature of the being whose ash is therein. The Magus is thus, of course, not a person in any ordinary sense; he represents a certain nature or idea. To put it otherwise, we may say, the Magus is a word. He is the Logos of the Ã†on which he brings to pass.â€ â€“Aleister Crowley, Liber 73, the Urn (See V for Vendetta by brother Alan Moore for further instruction on this matter.)

"Every people has the prophets it deserves; the credulous cowardly ice-cream-soda idealist is best left with the illiterate illuminati, rascally Rosicrucians, magpie mediums, parrot psychics, and cockroach clairvoyants with whom they feel at home. One cannot initiate imbeciles." -Aleister Crowley

Frater Abaris, aka Goethe, wrote down the five points of the pentagram which are in this film written, but who will understand their horror? In the beginning was the true demon and I created it to appear to be the deception. False images are necessary for the recognition of Truth.

And for any brethren who read this, The Master of the Temple, is the fly caught in the web...