Rudolph the Red Nosed Reindeer, written by Robert May, a Jew, was inspired by how Jews were ostracized because of their big noses. Santa (Satan?) plays the role of God, choosing Rudy to lead the other reindeer.
This Christmas song-staple illustrates how Christians gradually have been stripped of their religion and inducted into a satanic cult, Cabalist Judaism (Freemasonry).
Updated from Dec 23, 2019
by Henry Makow Ph.D
Cabalist Judaism is a satanic cult where God is replaced by his "Chosen People," led by the Masonic Jewish central bank cartel.
A documentary Dreaming of a Jewish Christmas (2017) brought home how the West has been inducted into this satanic cult (Cabalism). Many popular Christmas songs  were written by Jewish songwriters and are really Jewish. These include Dreaming of a White Christmas, Silver Bells and Let it Snow. Through banker control of the mass media, Cabalist Jews have removed Christ from Christmas and replaced him with snow and material consumption. 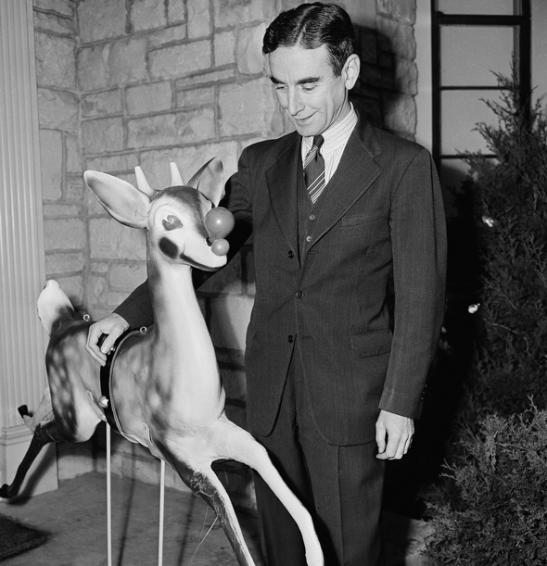 As the video embedded above explains, Rudolph the Red Nosed Reindeer, written by a Jew. Robert May, left, was inspired by how Jews were ostracized because of their big noses.
Santa plays the role of God, choosing Rudolph to lead the other reindeers.
Rudolph the Red-Nosed Reindeer
Had a very shiny nose
And if you ever saw it
You would even say it glows
All of the other reindeer
Used to laugh and call him names
They never let poor Rudolph
Join in any reindeer games
Then one foggy Christmas Eve
Santa came to say
"Rudolph, with your nose so bright
Won't you guide my sleigh tonight?"
Then how the reindeer loved him
As they shouted out with glee
"Rudolph the Red-Nosed Reindeer
You'll go down in history"
May's "Christmas" song is about Jewish supremacism. That's what "modernity" is all about. 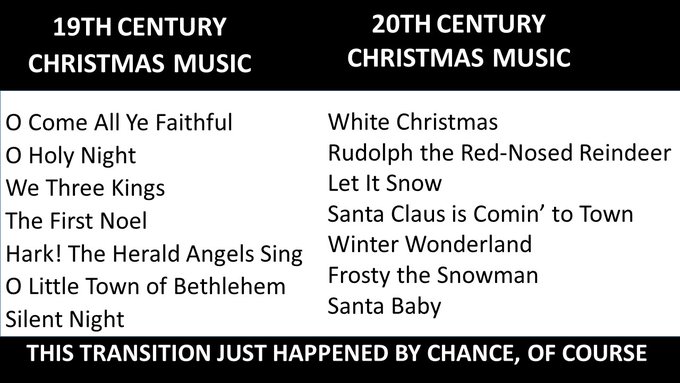 Cabalist Judaism involves abandoning absolute standards and imposing a false reality that advances Jewish banker interests instead.  Through their control of the mass media and suppression of the truth, they have converted most people to "Judaism." We are satanically possessed. We are all Jews now.
What do Cabalists believe? Just ask, what do you and I believe? They are our common values. We are materialists. There is nothing beyond matter, no Moral Order, no God and no soul to hear God speaking to us. We believe in buying-low-and-selling-high. We believe that after money, sex is the best thing in life and the more partners the better.
We believe in despoiling pre-puberty children with "sex education" and gender dysphoria. We pursue social causes like migration and civil rights if they can be used to weaken our perceived rivals. We believe in Greater Israel and endless wars against her perceived enemies, no matter how many people are killed or maimed. 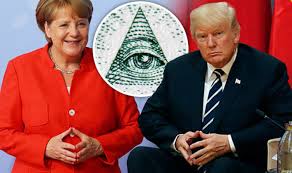 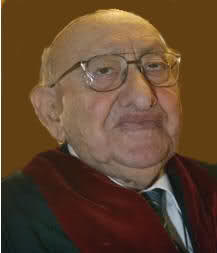 Cabalism is a reality-creating cult that believes thinking and saying something makes it true. It is a religion of deception, not revelation. Its god is Lucifer.  Naturally its practitioners have gathered the instruments of mass deception into their hands. This is the mass media and education.
The story behind "Rudolph" illustrates how Christians gradually have been stripped of their religion and inducted into this cult.
It's not just Christians. I had a Jewish friend who wrote a popular tv show set on an Indian reservation.
"What do you know about Indians?" I asked him.
"I just write them as Jews," he replied.
If you have time to watch "Dreaming of a Jewish Christmas" , you'll see how this subtle remaking of reality works. Hollywood's Sabbatean Sex Propaganda is another example.  People want to conform and belong. We assume the "chic" attitudes promoted by the mass media without even knowing it.
Cabalist Judaism has made Cabalist Jews, Freemasons, Communists, liberals, Neocons and Christian Zionists enemies of God and man.
It's time they rejoined the human race and Made Humanity Great Again.
---
Related- Santa Claus as Antichrist of the Season
-----------Even Jews Ask- Is Judaism a Satanic Cult?
-----------------The "God" of the Cabala
Michael Hoffman - Talmud Blasphemes Jesus and Virgin Mary
First Comment by Kevin Barrett
Merry Christmas, Henry
God bless you and yours.
Kevin
PS Here is the original version of "Rudolph" that May scribbled on a bar napkin. He changed it to the better-known version when he sobered up the next morning ; - ) 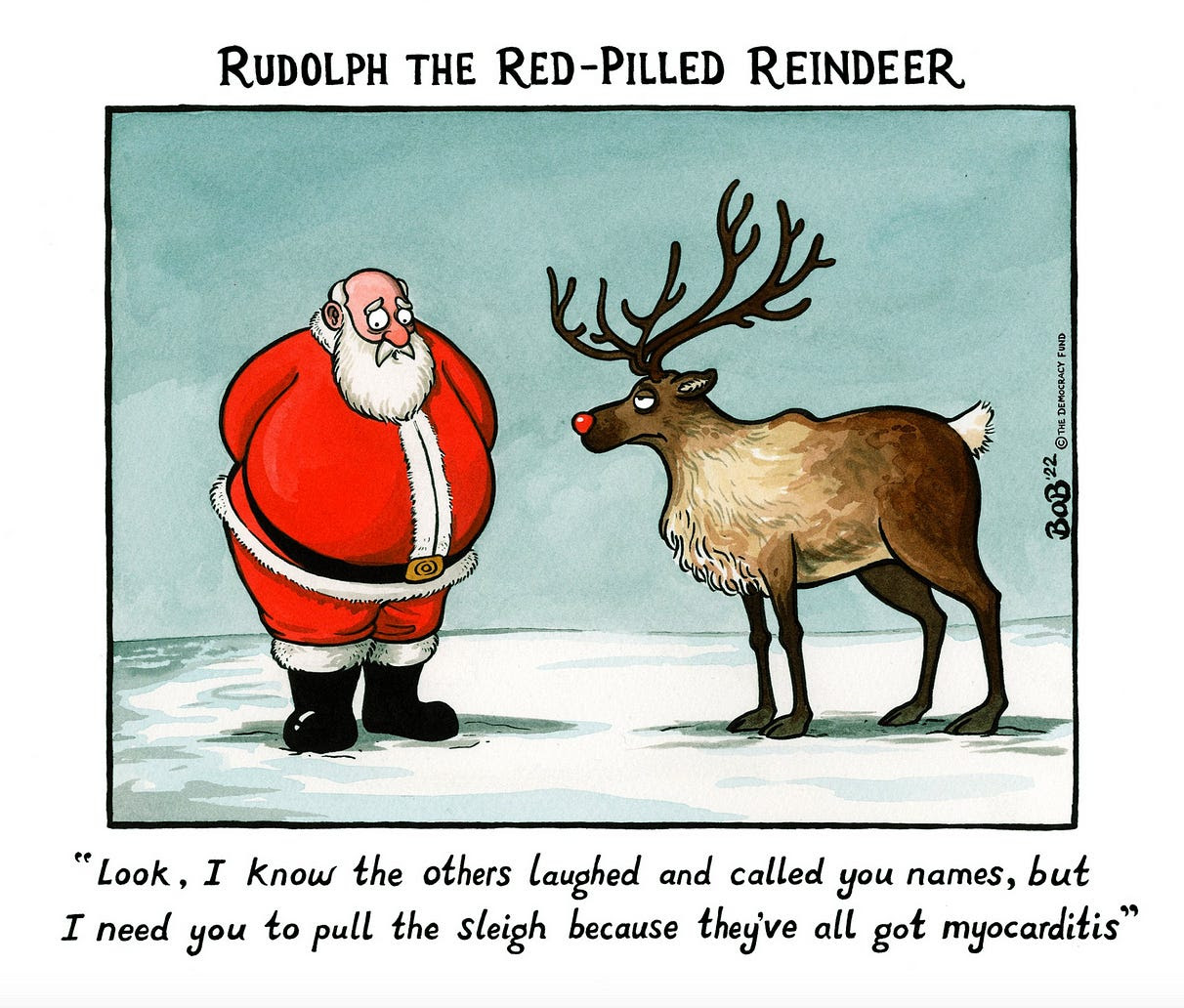 Cartoon credit, Robert Malone
Rudolf the Hook-Nosed Semite
Rudolf the hook-nosed Semite
Had a very Jewish nose
And if you ever saw it
You'd say it was quite a schnoz
All of the stupid goyim
Used to laugh and call him names
They wouldn't let poor Rudolf
Win all their financial games
Then one f*gged-up Xmas eve
Satan came to say:
"Rudolfstein you hook-nosed perv
you can head the Fed Reserve"
Then all the goyim owed him
Rudolf shouted out with glee
"Hey all you dumb goy cattle,
You're now ancient history!"

Comments for "Rudolph the Hooked-Nosed Reindeer "

When I read this post and watched the video on how Rudolph is an outsider with a big nose who represents Jews in a Christian culture, for some odd reason it reminded me of a farmer I met years ago when I was in Ag lending. It was the 1980s and times were very hard for farmers with many of them going broke and losing their farms. This one particular farmer said to me personally he didn't mind his neighbors going broke because he would be able to buy their machinery extra cheap and may be even their land. This comment kind of bounced off me at the time he said it, but later I thought it was a hard way to live, hoping or more or less cursing your neighbors into poverty so you can personally and financially gain from their ruin.

And we have all met the office jerk(s) who smirks at our failures because somehow that makes himself feel better.

I am not talking about a specific people group...just people.

We earn a poor reputation from our behaviors with others. In some cases, it is carried forward by an ethnic group. It is this we have to recognize and then attempt to change ourselves for the better.

If it is said, treat our neighbor as we would like to be treated ourselves, do we need to parse the words further? Such as saying, "Who is my neighbor?" I want to think everyone is my neighbor and apply the statement accordingly.

If Christmas songs are written with hidden motives or for devious end means, they certainly can not be in the Spirit of Christmas. They should be discarded. I am learning the same with even pop songs that have catchy tunes but terrible lyrics. No thank you.

I don't want to die being angry at even one person...no matter what they have done to me.

A heartfelt thank you for today's update. So many triggers concerning my own childhood, including watching the Rudolph TV show every year, but they're not really unique and there's very little for me to add but this: we always got gold covered coins in fishnet bags in our stockings, and where do you think that tradition came from? I even remember having Chinese food on Christmas once and wondering why.

Jewâ€ is Esau, who cannot accept that he both sold his birthright and was replaced by Jacob for the blessing. He still hates his brother but there will be hell to pay, soon.

â€œJewsâ€ cannot "replace God", that is impossible. â€œJewsâ€ are the chosen people of satan, as they are the children of Cain.

Satan has promised his seed that he will reverse Bible prophecy and kill the Almighty Creator, if the â€œjewsâ€ will help him break the glass ceiling via "climb-itâ€*, which will provide them with the â€œchangeâ€ they believe in.

It is all a hoax and abra-ca-dabra. But until the Almighty comes, there will be blood. And afterward, everlasting destruction for â€œthe jewâ€.

I've always been aware of, and have never liked, a key aspect of this song, unusual in a Christmas song - the audience being lectured, taught a morality tale, about inclusivity and prejudice. Just like movies and TV shows in the 70s, even some of our favorite shows from the old days that were still on, started lecturing us about male chauvinism and racial prejudice.

I remember around Christmas time I use to go to this bar in a working class Polish neighborhood to play pool and listen to their Christmas songs on the juke box. I remember the good cheer that was in that bar this time of year. That bar today is long gone and the neighborhood is no longer working Polish. You might get your car stolen or worse if you were to go to that place today.

It's the people who make the community what it is.
A multicultural third world America and Europe are in the making and the results will be devastating as it already is in many cities.

We all have to be thankful that we once lived in a time and experienced what life can be and not what life shouldn't be.