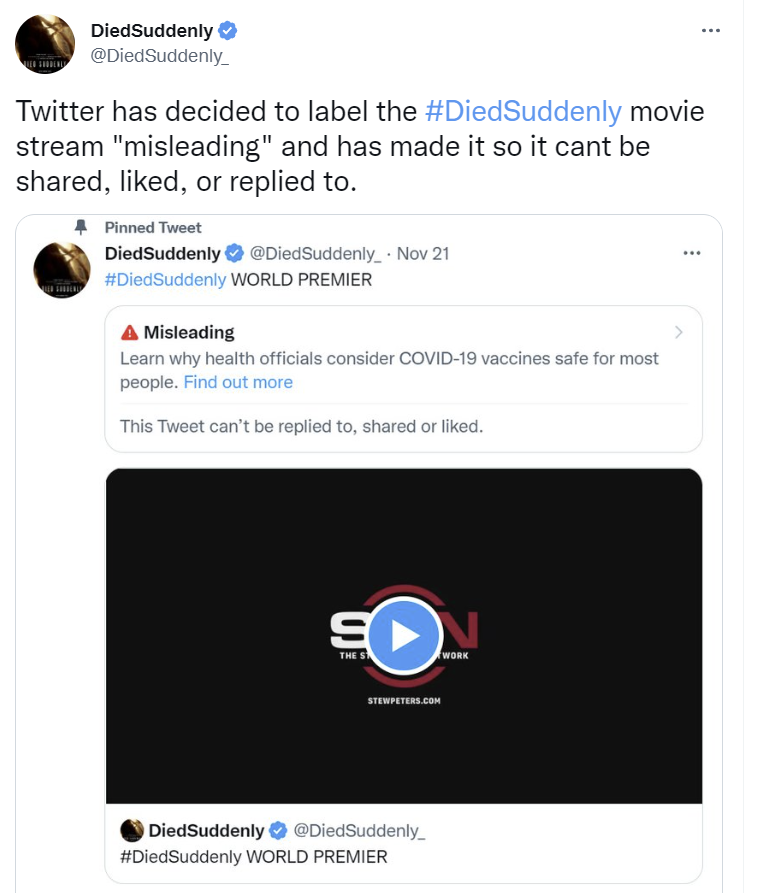 You cannot ban dissemination
of "Died Suddenly" and make
any claims to champion free speech.
By this censorship worthy of totalitarian states,
Elon Musk and Twitter are complicit in the vaccine
genocide.
-----
The people have spoken!
Musk to give all suspended accounts an amnesty next week

https://twitter.com/elonmusk
https://twitter.com/disclosetv/status/1595840926785720320
Excerpt from a review of "Died Suddenly"
"Nowadays, dying suddenly has become ominously familiar. According to a new film Died Suddenly available as of this week to stream via Twitter, in the last 18 months, the term 'Died Suddenly' has risen to the very top of 'most searched' Google terms. The film documents the surge in excess mortality in highly vaccinated countries. Dr. Peter McCullough, internist, cardiologist, epidemiologist, and one of the top five most-published, and most censored, medical researchers in the US, says that sudden death frequently occurs because the heart has been damaged by inflammation caused by Covid vaccines.

Papers that Pfizer and the Food and Drug Administration tried to hide for 75 years show that Pfizer knew in 2020 that myocarditis and pericarditis could be caused by its vaccine.

And in the Pfizer trial in Argentina, a report on a healthy 36-year old  participant - Augusto German Roux - who developed pericarditis immediately after his second Pfizer jab, mysteriously disappeared from the published trial results.

The Australian Technical Advisory Group on Immunisation (ATAGI) and the Cardiac Society of Australia and New Zealand (CSANZ) belatedly published a warning about myocarditis and pericarditis in September this year.

It was too late for Garin. Had his doctors known, his life might have been saved. His grieving family have still not received a cent in compensation. But Pfizer has apparently grossed nearly $100 billion from its sales of Covid-19 vaccines and treatments.

Rebecca Weisser is an independent journalist. Like what you read?  Consider supporting her work at PayPal.