"Soon, a major deflationary shock will land on Wall Street, and either there will be a last round of money printing (which will lead to unacceptable asset bubbles and rising prices even worse than we had the last two years), or they will let it go, and bring in their 'Cyber Attacks', which they have been signaling for years now, to sell the bail ins (slaughtering defaulting banks and taking deposits) that are unavoidable in the times ahead."
But what is going to change with CBDC is this:
- it will be run by Central Banks, instead of Commercial Banks.
- It will be programmable money, meaning they will be able to tell you what you can spend your money on. For instance: they'll deposit money on your account that you can only spend in that shop, on that item.
- It will be hyper easy for them to shut people out of the System. This will become a massive concern especially once World Government comes.- It will end cash. And ultimately, when the world government comes, it will be implemented in a chip in your right hand, or forehead. And if you refuse, you won't be able to buy or sell.

Yes...........it's coming. The technology is already all there. Braindead morons in Sweden have  been partaking in test trials. They love it, so convenient. It's not 'imminent', but give it five years of genocidal depression, and WW3, and people will accept it.

Government is trauma based mind control, and there are a series of mega trauma's on the way.

by Anthony Migchels
(henrymakow.com)
Far from being a sign of 'strength', the current rise of the Dollar is wreaking havoc not just in emerging markets, but in the biggest economies of the World.
Even worse: it's all based on a terrible bluff. The Fed's maniacal interest rate hikes are tearing apart not just the international economy, but America itself, and will soon have to be abandoned as the next mega shock is just months away.
The American Century is over, and there will be no new one.
The Euro has been worth more than the Dollar for 20 years, but is now standing at a mere $0.97. The Pound has not been as low since 1985. The Yen not since 1998. The Yuan will be forced into devaluation soon.

It's already a major crisis, and it's all going to end very badly, not long from now. 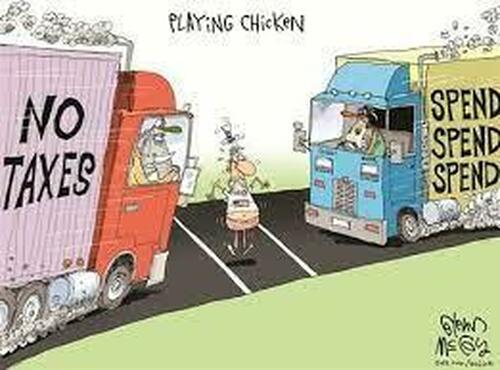 The utter cluelessness of the commentators about the true damage these rate hikes are doing is astounding.
"Oh, what is 3% higher rates, when you have 8% inflation? We need at least 10% interest rates!" This is a nice example by Peter Schiff spouting this ignorant nonsense.
People clamor for a new Volcker to 'fight inflation'. Volcker raised rates to an astounding 19,39% in April 1980, to kill the inflation of the seventies, and resurrect the Dollar. 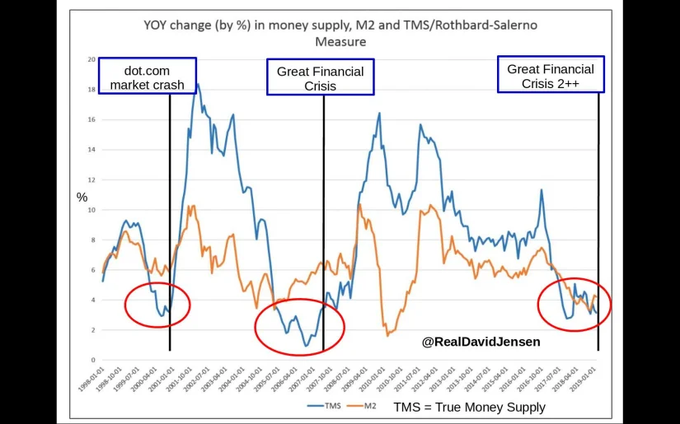 It should be completely obvious to anybody with a basic grasp of economics and monetary policy that the effect of rate hikes is a function of the size of the underlying debt. The larger the debt, the larger the effect of a 1% or any rate hike will be.
But clearly it isn't, as it's completely ignored by mostly all talking heads out there. While the debt drives EVERYTHING.
Why do people think the Stock Exchange AND the Bond Market had the worst first six months on record this year, after the Fed had raised rates only 1.25%? Because we need 10% rates?
No, when total debt is $90 Trillion, even a 1.25% rate hike already takes out more than a Trillion out of the economy in interest payments.
Recently, the Fed pumped up rates with another 0.75%, and its comments threatened more steep hikes in the months ahead. The Fed funds rate now is 3.25%.

And we've been here before: in 2018, the Fed, far more cautiously, raised its funds rate to 2,5%.
It immediately led to a crash in money growth (M2), leading to the Repo Crisis of September 2019, which in turn led to the Mega Bailout in the week of March 18th 2020, and us getting locked up to prevent a revolt.
THE FED CAUSING DEFLATIONARY SHOCKS 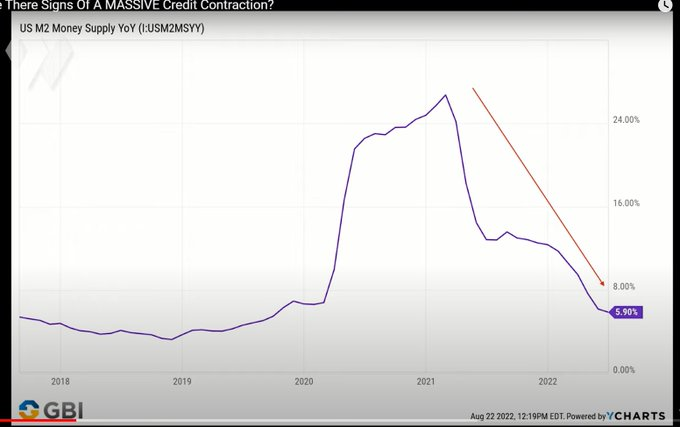 Gosh, I wonder what the result will be now?! I'm sure it will be all very different this time. Not.

Remember: the Repo Crisis involved the mass bankruptcy of the biggest banks on both sides of the Atlantic. So it was not 'just another bust', it was an almost terminal one. One that is coming back soon. The only question is how soon. Could be months. Could be a little longer. But with the current hikes, and more coming, it's looking like rather sooner than later.

THE DOLLAR IS DESTROYING THE BIGGEST ECONOMIES IN THE WORLD
The problems are manifold: in the first place, there is a severe shortage of Dollar in Asia. The bottom line really is, that the American economy is simply not big enough anymore to provide all the world with sufficient money without inflation at home. In 1945, the US economy produced half of World production excl. the Soviet block. It's now about 23%, if we calculate very generously. In real terms, in terms of actual production instead of all the financial nonsense that is counted as 'GDP', it's really much less. 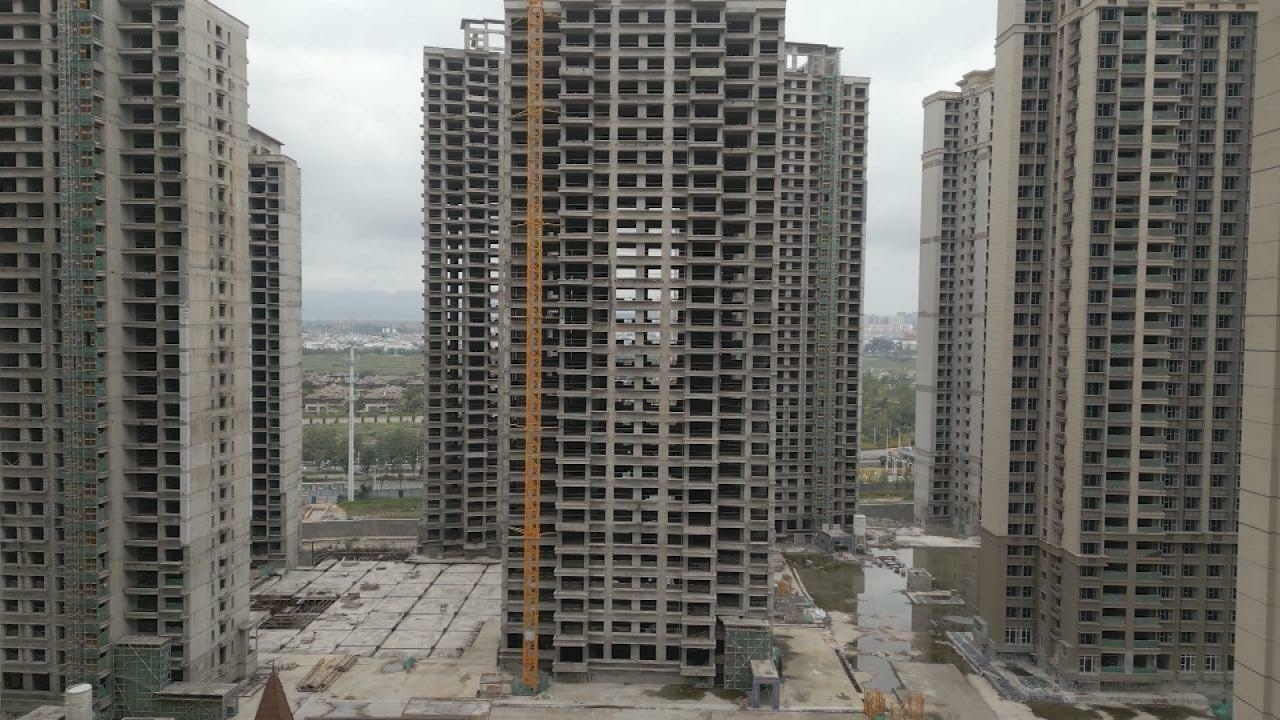 This is deflating especially the Chinese economy, which is now suffering a massive real estate collapse, to a large extent because of this. The only question is, really, how long Beijing will continue to accept this, and the answer is: not long.

Equally bad is that economies are importing a lot of inflation because their units are declining vis a vis the Dollar. Japan is trying to keep its own interest rates low, but the Yen has imploded as a result. As a consequence, the Japanese felt forced to start propping up the Yen, last week, by selling dollars, and most notably: US treasuries. This immediately led to a further spike of yields on the US treasuries market. Even worse: it sets a very dangerous precedent. If Japan can do it, so can everybody else. And it's really the very last thing the Petrodollar can use in its final days.

China and Japan are the World's largest holders of treasuries, and they have both liquidated about 10% of their holdings this year. Yellen was in Japan this year, likely to threaten them to stop. But while US threats are becoming more hysterical by the day, they count for less and less.

The BRICS
Earlier this year, just after the sanctions started against Russia, Moscow soft pegged the Ruble against Gold. And while this did not really last, it was a big shot across the bow. Recently, Moscow has said it could open a Gold Exchange of their own, to rival the COMEX in NYC and London's LBMA.

The true threat to the Petrodollar this entails, is that it would involve price discovery for precious metals, independent of the West. And without Gold futures to suppress its price. It would mean exploding the Fed's longstanding game of Gold suppression, exposing not only the true price of precious metals, but especially the weakness of the Dollar and associated currencies (Euro, Pound, Yen).

Not only that: the BRICS nations are planning a kind of reserve currency of their own. In parallel with not so much to the Dollar, but the IMF. Gold will play an important role in that basket of currencies. It will also radically speed up de-dollarization. Already China, India, Russia are using less and less Dollar for trade between them, while this trade is exploding.

Interestingly, in Shanghai Gold is currently traded at a $43 premium compared to prices in NYC. Which is not only sending lots of Gold from the West to the East, it's also indicating real stresses in the physical vs. paper markets.

COMEX, the LBMA, and SILVER

For always we have known that there would come a day, that the faux prices for Gold and Silver, suppressed with futures, would at some point get exposed by the COMEX not being able to deliver physical metals at said prices. 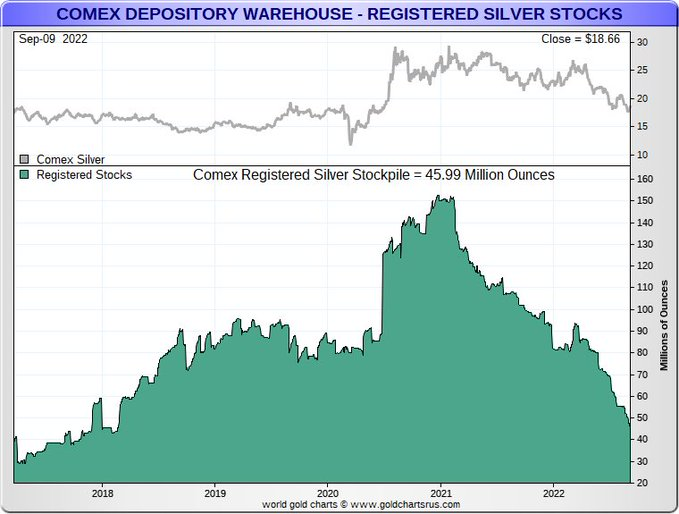 And over the last year or so, COMEX has been bleeding physical Silver at an astounding rate. Have a look at the above graph: it really speaks for itself. The silver stackers are besides themselves, at the moment, as pay day seems to be coming for them. For years they've been stacking, knowing it would all blow up at some point. Similar graphs are available for the LBMA.

CONCLUSION
In reality, the Petrodollar was already executed in March 2020, when they printed $6 Trillion, $4 Trillion of which went to the Big Banks which were all bankrupt. Here's Uncle Vlad tearing into 'the irresponsible monetary policies of the West', and the disastrous consequences it has had for World Markets.

But Geopolitics has its slow rhythm, and these trends take time to come to their conclusion.

Soon, a major deflationary shock will land on Wall Street, and either there will be a last round of money printing (which will lead to unacceptable asset bubbles and rising prices even worse than we had the last two years), or they will let it go, and bring in their 'Cyber Attacks', which they have been signaling for years now, to sell the bail ins (slaughtering defaulting banks and taking deposits) that are unavoidable in the times ahead.

The BRICS nations will distance itself from the Dollar, and will reintroduce Gold as their main monetary base, meaning the New Gold Standard will come from the East. It will lead to the deflation of the debt bubble in the West.

Do not be fooled by the current meteoric rise of the dying Dollar.

A Supernova ends up as a small white dwarf, and so will the once mighty Greenback.
----
Related:

The Fed Is Pulling The Plug On The Debt Bubble. 'Cyber Attacks', Followed By The Greatest Depression Are Coming
The Dying Dollar And The Rise Of A New Currency Order (ten years old! And very relevant now, its predictions are coming true).
The BRICS Bank: Next Stop On The Road To World Currency

Some people are all tied up in the physical shape of the world, which really makes no difference at all in our lives, one way or another, but things like below make differences up to life or death.

Past time for people to get their priorities in order. What the satanic/talmudic/satanists, who have been allowed for centuries to steal all wealth using fake "bank credit," are about to do will change our lives more than anyone - other than those who have actually done the proper homework - have had the faintest clue, as we all indulged in a very long joy ride.

It was not a godly joy ride and the price of it is revealed only at its end. Use what time is left properly.

(Only the very last sentence of this article shows what is off base. Federal Reserve notes have NEVER been greenbacks. Greenbacks were never DEBT, they were ACTUAL MONEY, and fed notes were never ANYTHING ELSE BUT DEBT. Manufactured criminal false debt to boot. They were NEVER actual money. It is an error to call notes of debt "dollars.")