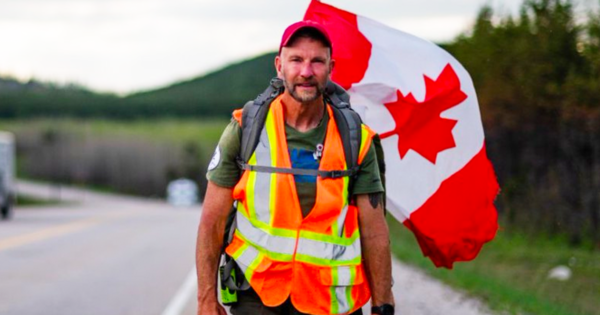 A 28-year veteran, James Topp was discharged
from the Canadian military for protesting the mandatory
killer-vaccine policy.
His march from Vancouver to Ottawa in time for Canada Day was
greeted by enthusiastic supporters all along the route.
"We rise to serve Canadians with honesty, respect and compassion, for the purpose of reuniting our people. We do this, with the intention of ensuring our government upholds the laws that support Canada's Charter of Rights and Freedoms,"  his website says.
Despite the fact that 82% of Canadians have been vaccinated, chief public health officer and vaccine salesman, Dr. Theresa Tam Thursday urged Canadians to get a THIRD shot as "cases are increasing."
by Lars Johannes
(henrymakow.com)
I was in Winnipeg when James Topp come through town. My Daughter, Granddaughter, and I attended the rally in a community center.
He was introduced as a veteran, who had paid the price for his views on Covid. He had served his country in Bosnia. He had put his  life on the line again. Now he is going to fight again to  save the Canada that he knew and loved, again, He called to all veterans, the police force, the army, and the general public, to support him, and resist any way they felt was appropriate.
Upon his initial entrance, the crowd, filled to capacity, roared with applause and shouts of encouragement. FREEDOM, FREEDOM, FREEDOM  I thought I was at a screening of Brave Heart.  All the way through his speech, the crowd, man, women, children, babies, applauded, and screamed with encouragement. You could not help getting swept away  with emotion. I have never seen so many Canadian flags. I have never seen so many people not afraid to yell and cheer.

You see, this lonely, soft spoken, man, has marched all the way from BC to Ottawa. He is followed with a small entourage of supports. His speech is powerful, and to the point. If we do not resist, "We will lose the Canada, which we all know and love". A country that sands for Peace and Freedom for all. I emptied my pockets
His most powerful comment, is that he was extremely surprised, at the support he has received along the way. He did not anticipate such a wide range. Halls opened up to his rallies free, homes opened up for him to stay in free, food provided free, cash flowed for his expenses, he is not a rich man, and had to drive a truck to make ends meet, and to make his mortgage payments. You see, he lost his job with the "Forces", and the RCMP, because he would not vaccinate. 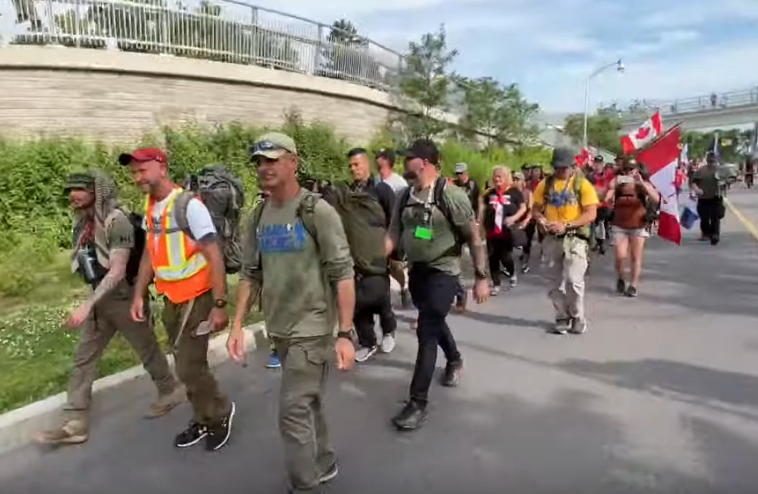 Flags everywhere he went, more and more flags, Canadian Flags, Red and beautiful. A sign, no, a symbol, of who you are, what you represent, that you are patriotic, that you now know, without speaking, who is with you, who is against what has been going on in this beautiful country of ours. Now, whenever I see a Canadian Flag on a car I honk my horn, and they honk back. I have two flags on my van.

On June 30, 2022, he arrived in Ottawa, and marched with a sea of flag caring supporters Red Maple leafs. For two more hours, he and his supporters marched to the Hill, which is now surrounded with what looks like a dry moat, and barricades, and armed police and RCMP. It is believed that the HILL has sonic disrupters in place as well. All this before Canada Day, which our politicians want to rename, to What.
Can you believe this, all in our Canada, on the day before Canada Day.
It used to be a celebration, a party, with bands playing, and people dancing, all for the most part peaceful. Now, we have fully armed forces, ready to repel, unarmed, peaceful Canadians, who want to celebrate and demonstrate, peacefully. Tamar Leech has been arrested for no reason, other than she might attend the Canada Day Celebration.

It is now believed, that 25 MPs, will talk with James, about his concerns.

Is the Plains of Abraham around here some where ?

-
RELATED-
POILIEVRE JOINS TOPP PROTEST
People protest against COVID-19 health measures in Ottawa on Thursday. Police have arrested four people in downtown Ottawa after a Canadian soldier charged for speaking out against COVID-19 vaccine requirements led a procession into the city and delivered a speech to a rapt crowd of hundreds of supporters.
https://www.cbc.ca/news/canada/ottawa/arrests-downtown-ottawa-june-30-1.6508047
Just in and his police state goons smash heads on Canada Day Eve
twitter.com/TheRealKeean/status/1542656900478541825?ref_src=twsrc%5Etfw%7Ctwcamp%5Etweetembed%7Ctwterm%5E1542656900478541825%7Ctwgr%5E%7Ctwcon%5Es1_c10&ref_url=https%3A%2F%2Fthecountersignal.com%2Fprotesters-clash-with-ottawa-police%2F