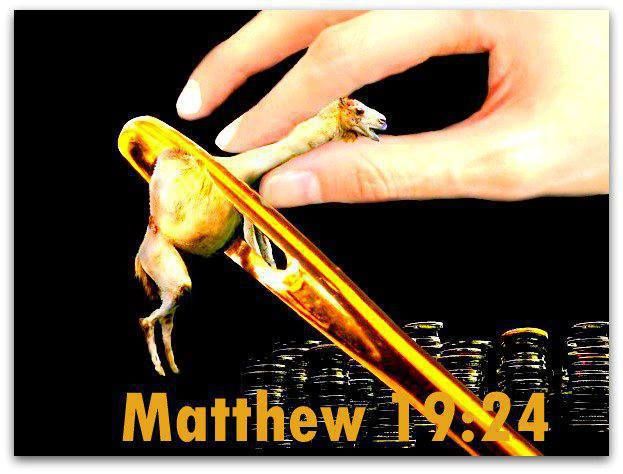 Why People Comply
Mathew 24 "Again I tell you, it is easier for a camel to go through the eye of a needle than for someone who is rich to enter the kingdom of God."
Canadian federal government will exempt 2/3 of their employees from mandatory vaccination. Afraid civil service will collapse?

by CR
(henrymakow.com)
I saw the same thing somewhere else, looks like it's true but the regular office-working bureaucrats are not exempt.  I don't have much faith in the unions either, many unions initially opposed the mandates only to back down at the last moment.  Like the TTC union, and I know someone who works for the province of Ontario, union was initially opposed to even mandating disclosure of vaccine status but now bowed to the pressure.

The worst thing is how so many people are just giving up and taking the vaccine now that they are facing job loss.  If they all stood their ground then there would be a good chance these mandates would get thrown out, instead they are going to be taking booster shots for years to come.

Once you give into this coerced vaccination you are essentially giving the government authority over your body, you are like a puppet on a string.  If next they say you have to donate a kidney or have a vasectomy or whatever, how can you oppose once you have given them absolute power over you?

I bet there would be less opposition to mandated worship of satan or whatever demonic idol.  It poses no physical threat to your health, and this is a society that has abandoned God and given up freedom.  This could very well be what is happening next.

My observation is that people with good jobs are least likely to resist, while people living in public housing, and even better if they are on welfare or disability, have no incentive to comply and aren't at risk of losing anything.  It makes me think of the story of Jesus and the rich man:

21 Jesus answered, "If you want to be perfect, go, sell your possessions and give to the poor, and you will have treasure in heaven. Then come, follow me."

22 When the young man heard this, he went away sad, because he had great wealth.


Many people living comfortably are more willing to accept servitude to evil people rather than risk losing their possessions and suffering.  This is why things are the way they are now.