The Tavistock Institute -- "the greatest brainwashing, propaganda and social engineering institution in history" is charged with making the descent into Communist tyranny look palatable, or even desirable."
Impressions on listening to this six-hour reading of John Coleman's The Tavistock Institute of Human Relations: Shaping the Moral, Spiritual, Cultural, Political and Economic Decline of the United States of America (2006.)

by Henry Makow PhD
I have been a bloodhound following the scent of the Masonic Jewish (Satanist) conspiracy for about 20 years.
This book by John Coleman made me feel like a schoolboy instructed by a school master far my superior both morally and intellectually.
It is a most comprehensive and candid revelation of our true political and economic predicament. I don't know where Coleman found so much information. It is the history of the past century stripped of BS. 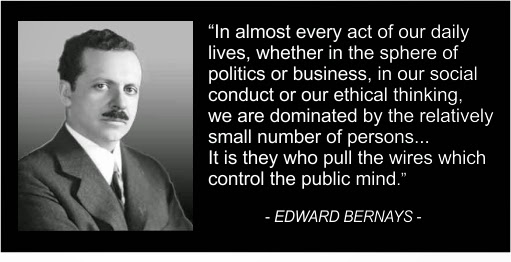 (Edward Bernays and Walter Lippmann, both Jews, directed many Tavistock programs.)
Essentially, the satanist central bank cartel has been sabotaging human affairs for more than a hundred years in order to create a Communist world government (globalism) controlled by them. The Tavistock Institute -- "the greatest brainwashing, propaganda and social engineering institution in history" is charged with making this descent into Communist tyranny look inevitable, palatable, or even desirable.
Bogus opinion polling is one of their favorite methods of creating support for unpopular policies. Most pundits are in their employ. The mass media have always been blending fact and fiction. This propaganda got the US into World Wars One and Two, the Gulf War and Afghanistan. They lied about JFK, RFK and 9-11, yet the rubes still lap it up.
Tavistock is responsible for such Commie shibboleths as BLM, CRT, transgenderism, illegal migration and defunding the police and old chestnuts like sexual liberation and pornography. They were behind false flag mass shootings like Sandy Hook, Las Vegas,  and Parkland. Like COVID, they are "disturbances" designed to create a state of permanent stress.
Mike Stone sends an anecdote which illustrates how they have created a schism throughout society.
The girl at the checkout counter of my local library was acting kind of flirty with me in June, like she was interested. So a couple of weeks ago I asked her if she's surviving "all the craziness." She narrowed her eyes and said, "What craziness?" I said, "The virus hoax." She looked taken aback and said, "You don't think it's real?" "No," I told her. She turned sniffy, said, "Well, I know two people who died from it," and shoved my books across the counter at me. Since then she doesn't talk to me.
Similarly families have been riven in two. 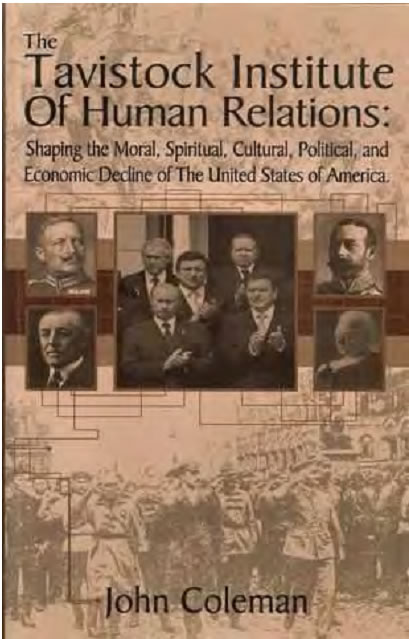 OMNIPOTENT
The book is demoralizing in that their power appears insurmountable. As the Covid scam illustrates, their agents are everywhere and control everything. Coleman estimates they control 450 of the Fortune 500 corporations which explains why so many are now requiring their employees be vaccinated.
As you listen, you realize that covid is just the latest of a series of scams designed to degrade humanity, rob and herd it into pens. These include both world wars, the Great Depression, the Cold War, Vietnam, Korea, Iraq and Afghanistan.
Financed as you would expect by the Rothschilds, Rockefellers and the British Royal Family, the Tavistock Institute is where "the matrix" is generated.
Most of what we know about the world is a lie. Everything that happens is engineered. The "news" is a lie. The abdication of free speech and inquiry, fairness and common sense by the mass media, medicine, government, education and law is consistent with this picture. We have been satanically possessed. Rothschild is the sorcerer and Tavistock is his magic wand.
Hundreds of US "think tanks" plot the destruction of democracy and national independence. The field of psychology is dedicated to mind control. The path to personal success is to advance this globalist dystopia. Here Coleman describes how these people are "puffed."  Every major politician right and left is controlled by them. Trump took a fall on their orders. Do you ever hear Rand Paul or Ron DeSantis talk about the Rothschilds, Communism, Freemasonry or Tavistock for that matter? Think they don't know? This is the third rail of politics. No one touches it.
I was surprised that Coleman put great importance on the degradation of women (feminism) and the promotion of homosexuality which has resulted in the decline of marriage and family.
The Illuminati may have over-reached this time. They sent everyone to their room but neglected to shut down the Internet. It is hard to permanently enslave people who can communicate and share information instantly on a worldwide basis. Despite their efforts, the truth about the "vaccines" is out. We are holding our breath to find out if the "vaccine" is a form of digital control or euthanasia.
Moreover, Americans have 400 million guns, and they will eventually use them when they realize they have nothing to lose.
Make no mistake, the satanists want everyone and everything you hold dear.  They are going to demonize and persecute the unvaccinated, and even round them up. The $64,000 Question: Will Americans use their guns to stop from being forcibly vaccinated or incarcerated?
Coleman is the real thing. Eustace Mullins tried to discredit him because he doesn't hammer the Jews. There are so many Gentile traitors (Freemasons) in the plot, the "Jewish Conspiracy" has graduated into full-blown Satanism. A cancer is destroying Western society.
Covid is just the latest in a long line of Tavistock psyops. Humanity is mind-controlled by Satanists.
We need to take back the banking system and with it our freedom and human dignity.
---------
Related ----- Tavistock - Why America folded like a cheap tent

Comments for "Covid is Just the Latest Tavistock Psy Op"

Covid is the latest spy-op

The T.I. is controlled by the Jesuits via the CityofLondon by way of the Worshipfull Company of Mercers. The US is controlled by the City of London, so the core of all our problems is the City of London. Putin considers the UK as the only real enemy. The top of the pyramid is very small, maybe some 10 families and 20.000 family members, see the Committee of 300. The creation of Adolph Hitlers multi personalities was the greatest psy-op ever, imho. Made in the UK.