There's no way Gates will succeed in his goal
unless he scares the bejesus out of people,
and the only way to do that is to unleash
something much more powerful.
by Henry Makow PhD
In an interview with Stephen Colbert in April, Bill Gates mentioned a "bio-terror attack" in the context of "pandemic two" (start at 2 min.)
Colbert asked Gates "What else are we not listening to, that we need to take action on now?"
Gates replied, "Well, the idea of a bio-terrorist attack is kind of the nightmare scenario because they're a pathogen with a high death rate."
Colbert turns his head in laughter.
Gates goes on "The good news is most of the work we are going to do, to be ready for pandemic two, I call this pandemic one, most of the work we're doing to be ready for that, are also the things we need to do to minimize the threat of bioterrorism."
Although I posted an article about this, I didn't really appreciate its significance.
Who would do this? Now I realize.
Why Gates himself of course!
He has been talking about such an attack for years.
COVID19 "cases" are a lot like money.
They are simply digits.
The Illuminati create them out of hot air.
With control over the MSM, they are used to creating our reality: wars, moon landings, nuclear bombs, assassinations, climate change, false-flag terror.
However, people are remarking at how low the actual death rate is, less than 1/2 of one percent, hardly enough to justify crippling the world economy and putting everyone in face diapers and under house arrest.
If the Illuminati can't sustain their narrative, it is likely that they will unleash a new more deadly virus.
Gates has said that their goal is to vaccinate the human race. Hundreds of millions of doses have been ordered. The stock market soars on the prospect, thinking this will actually cure the imaginary disease. There is no way Gates will succeed unless he scares the bejesus out of people, and the only way to do that is to unleash something much more powerful.
Gates' cohorts at the World Economic Forum have stated that the pandemic is the pretext to "reset" literally every aspect of global society.
The list includes Technology, Financial and Monetary Systems, Cities, Energy, Media, and Culture.
There is no way they will achieve their goal without a new improved COVID20. 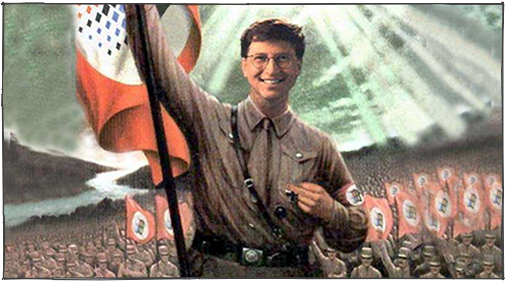 Like Gates, Adolf Hitler outlined his plans well in advance. Nobody stopped him. Can no one stop Bill Gates?
Like Europe's Jews, are we going meekly to our fate?
We do not yet appreciate the seriousness of our situation. The prospect of a cure and recovery keeps us docile. People are getting bail-outs.
But sooner or later, the money will stop. We will understand that they are out to destroy civilization.
They are out to destroy us.
We gave them unlimited wealth when we allowed them to create money. Now they want unlimited power.
As Illuminati insider Leonard Cohen said,
I have seen the future and it is murder.
---
RELATED- BILL GATES THREATENS THE WORLD WITH PANDEMIC TWO
First Comment from Andrew
Based upon what I have witnessed for the last 4 months, COVID-19 PANIC PARTY has been 95% effective. It has been so SUCCESSFUL that many of my close friends ARE DESPERATE FOR THE COVID-19 VACCINE. I even have ex-friends who hate me for disturbing their TV (MSM) induced PANIC PARTY. The Quiet Elite represented by Bill Gates doesn't need PANDEMIC TWO.
Deanna- I have come to the conclusion that they never needed [a scamdemic.] I look around and realize that powers-that-should-not-be have wasted a lot of time and money. They could have just ordered these people right into the boxcars without any reason. Not one of these people would have asked questions.

Comments for " "Pandemic Two" Will Be More Deadly (COVID-20)"

The disease and pestilence cycle that we are in after Armstrong reaches its peak in 2022.
Bill Gates and his gang of psychopaths do not change this cycle, serving at best as an insignificant catalyst. We should not overestimate these nutcases, as they will never defeat God and nature. Man has sinned against God and nature and God's punishment against mankind is nothing but our karma.

Not everyone is taking the COVID agenda laying down these days. There are large protests going on in Israel today from business owners and workers who have had little or no income these last 5 months due to decreased tourist numbers and layoffs with no end in the immediate future. The economic aid has been hard to get and they are very unhappy with the way this whole COVID mess has been handled by their government

Agree with Andrew. The combination of vaccine and 5G rollout is the ultimate goal. Certainly, a lethal pathogen release is a possibility. They've got enough confusion, disunity and misery now already without it.