Covid Vaxx May Be Required for Social Standing 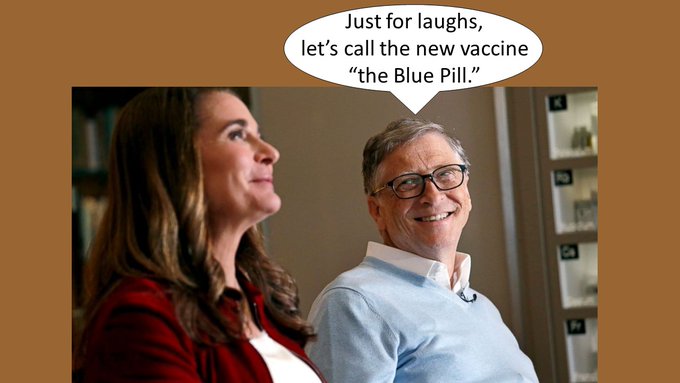 (The "blue pill" is for the sheep.)
If the Illuminati bankers have their way, Anti-Vaxxers will be "quarantined" i.e. sent to Gulags
Bolshevik Jews and Masons are planning to do to America what they did to Russia
Latest!

The game plan of the oligarch elites is to keep us locked-down until we become so desperate for our freedom that people will submit to forced vaccinations, chip implants, and "contact tracing" (aka personal government surveillance 24/7) Take a stand for America and be a true patriot NOT a spectator.
Now there's talk of mass testing for COVID-19 antibodies, screening checkpoints, contact tracing, immunity passports to allow those who have recovered from the virus to move around more freely, and snitch tip lines for reporting "rule breakers" to the authorities.
If you can't read the writing on the wall, you need to pay better attention...
This war on COVID-19 will be yet another war on the American people, waged with all of the surveillance weaponry at the government's disposal: thermal imaging cameras, drones, contact tracing, biometric databases, etc.  - John Whitehead
by Henry Makow PhD
Acceptance of the coronavirus hoax, including vaccination, will be the criterion for participation in society.
This seems to be the Illuminati Jewish banker agenda. Without a chip, you will not be able to work, attend sports events, school or move freely.
You already need to signal acceptance of the hoax by wearing a mask if you want to fly or buy food in many places.
The #scamdemic is a worldwide coup d'etat disguised as a health emergency. The damage the lockdown has done is 1000 times worse than the scamdemic itself. It is using a steam roller to kill a fly.
We knew something was awry when corporations started taking political stands and literally writing off half their market. Starbucks didn't want customers who weren't gay friendly. Gillette didn't want toxic males. The NFL didn't want patriots. Clearly the game plan is to marginalize and destroy people who don't conform.
This is part of a longstanding Cabalist Jewish (Satanist) war on the authentic American - free, patriotic, family-oriented, white, Christian. This doesn't mean minorities can't be "authentic" if they subscribe to the same values.
Bill Gates has made no secret of their plan to vaccinate/chip the whole planet.

Acceptance of the hoax will allow them to separate the sheep from the goats. This is how they will identify people who stand for God, family, individual freedom and truth.
In Italy, an opponent of the lockdown was thrown into a psychiatric hospital.
CABALIST WAR OF GENOCIDE
The scamdemic is the latest salvo in a genocidal war on civilization, and white heterosexual Christians in particular.
A doctor who received a Gold Medal  from the Gates Foundation said, "We need to get rid of all the whites and the educated people in America" because they question vaccines and immigrants are happy to take them."
This is is not hypothetical.
US Preps For 'COVID-19 Mass Vaccination' With $110 Million Spent On Needles And Syringes
"The U.S. government has backed a handful, including a $450 million deal with Johnson & Johnson arm Janssen Pharmaceutical for its COVID-19 cure. That vaccine could be ready by early 2021. Oxford University's vaccine could be given to millions of people even earlier. AstraZeneca's chief executive, Pascal Soriot, suggested toward the end of last week that the cure could be ready for a limited rollout before the close of 2020."
Some polls show that a majority of people favor mandatory vaccination.

This is war. We need to educate the public, organize mass protests and legal challenges, and arm ourselves.
The Illuminati may have miscalculated since a permanent lockdown is truly "unsustainable," to use their term. Moreover, there are 400 million guns in private hands in the USA. I doubt if they can enforce mandatory vaccination. Instead, they will rely on using the "immunity passport" to enforce police state conformity.
-----
First Comment -
Robert W writes:
All this would be dystopian and horrific enough were it not for the added layer of the human microchipping agenda. Gates said he wants vaccine certificates, and although there could also be a plan for actual print certificates ("your papers, please"), Gates was clear that he meant digital vaccine certificates. This is in line with his outspoken ID2020 agenda which claims it wants to benevolently provide everyone with a digital identity but which is really a cover for inserting nanochips into everyone. If we allow that, we will have entered full-blown transhumanistic tyranny, will have sacrificed our bodily sovereignty and will have become nodes on the IoT Smart Grid, at the whim of the NWO controllers who will be able to do all sorts of things to remotely influence and control us via the broadcasting of frequencies to the chips embedded in us. Once we allow the State to have the right to forcibly inject things into our body against our will, it's going to be, in short, game over.
--
Jed writes:
Thanks for another insightful article, bringing truth to light, as always.
It is truly amazing that so many are so easily duped and so willingly going along with this CV19 scam, wearing the masks and buying into the need for a globally mandated vaccine before we can get out of lockdown. Vaccines have a horrible history when looked at holistically, by death rates. Just look at the history of vaccines versus infectious outbreaks in the US (without having to go to India and Africa with their adverse outcomes) over the last two consecutive 110 year periods, the first one before widespread vaccine use and the last one with widespread vaccine use (below). One would expect the opposite results if vaccines were as effective and safe as they are touted.
With 10 times higher mortality rate due to infectious outbreaks during widespread vaccine use in last 110 years, relative to infections in the previous 110 years (mostly diseases easily avoided via cleaner water and food), data would suggest that vaccines, rather than improve health, have in fact made overall health worse. Data suggest a better solution to infectious disease would have been to ensure cleaner water and food. On top of that, over 50% of children now are being treated for some type of chronic illness (currently under the heaviest vaccine schedule ever), whereas in 1900 it was in low single-digit the percentage of chronically ill.
US Mortality Rate due to infectious outbreaks (minus seasonal flu) over two consecutive 110 year periods
Before Vaccines (1800 to 1910), Mortality Rate due to infections 0.7 per 1000
Cholera, 1,137 peak annual deaths, 1832 to 1866, Contaminated water
Scarlet Fever, 2,089 peak annual deaths (95% of cases children), 1858 to 1959, Bacterial
Typhoid Fever, 10,771 peak annual deaths, 1906 to 1907, Contaminated food
After Vaccines - 1910 to 2020, Mortality Rate due to infections 7.14 per 1000 (10 times higher)
First Measles, 6,000 peak annual deaths (over 600,000 total deaths), 1912 to 1922
Spanish Flu, 67,500 peak annual deaths, 1918 to 1919
Diphtheria, 15,520 peak annual deaths, 1921 to 1925
Polio, 3,145 peak annual deaths, 1916 to 1955, peak in 1952
Second Measles, 10,000 peak annual deaths, 1981 to 1991
Cryptosporidium, 100 peak annual deaths, 1993, Contaminated water
HIV, 13,000 peak annual deaths (over 700,000 total deaths), 1981 to 2020
Whooping Cough, 10 peak annual deaths (infant deaths), 2010 and 2014
H1N1 (Influenza A), 12,469 peak annual deaths, 2009

Comments for "Covid Vaxx May Be Required for Social Standing"

This Summer will be the last of its kind. Maybe not entirely normal, but reminiscent of normal.

It reminds of these Berliners, swimming in, and sunbathing at the Spree in Berlin, July 1944.

Knowing the end was near, while still enjoying a semblance of the Germany they once knew.

We're all Germans now. If not Palestinians. "I am a Berliner", some guy said at some point. I'm starting to get the idea.

Even when submitting that many much better men thought it so previously.

We'll be in touch. There'll be plenty to talk about in the times ahead. Meanwhile: keep plugging the 'civil disobedience' meme.

Because obedience is treachery now, and anathema to getting through Judgement Day, which is around the corner..