Goyim are Animals- The Talmudic NWO 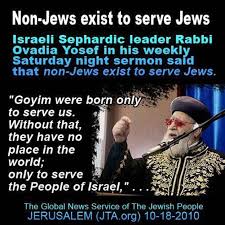 A constant feature of the New World Order is that human beings are animals
and we are defined by our animal desires.
There is a consistent denial of God, or that human beings have a connection to God through our souls. Why is this?
Animals have no rights.
Our connection to God is what defines us as human, rather than animal. It is the basis for "human" rights.
NWO Communism seeks to dispossess us. It takes away our human identity, (race, religion, gender and nation) our children, and finally, our property.
Now, where else do we find a denial of our humanity?

(l. Menachem Schneerson)
The Talmud states only Jews partake of God. All non-Jews are animals.
While the vast majority of Jews don't know the Talmud and don't hold this view, it definitely is held by many Israelis toward Palestinians. Furthermore, it is held by the Satanists who govern the NWO. Humanity's tragic experience has been profoundly influenced by people who hate us.
One of Judaism's central statements, the Talmud, is Hate Literature. You have to hand it to Jews who are always condemning others for hatred and racism. Their holy manifesto is the worst hate and racism imaginable!!  They accuse others of the crimes they are most guilty of. That's their camouflage.
I think Jews would be liberated if they accepted the unpleasant fact that collectively the Jewish Enterprise is flawed, to put it mildly.
Based on outcome, (i.e. what they are doing, not what they are saying)  the agenda of Organized Jewry is satanic and ultimately jeopardizes the security of all Jews.
Needless to say, this agenda has long ago spread throughout the fabric of society via Freemasonry. This is why we have perpetual war; why we're encouraged to indulge and explore our animal nature, why we're dumbed down rather than raised up.
Jewish Racism towards Non-Jews as expressed in the Talmud   (Jews always deny the authenticity of quotes like these or say they were taken "out of context." Make up your own mind.)

"The modern Jew is the product of the Talmud..." - "Babylonian Talmud", published by the Boston Talmud Society, p. XII
The Jews refer to the remainder of Earths inhabitants, the non-Jewish peoples, as "Gentiles", "Goyim".
Let's see what the Jewish Talmud teaches the Jews concerning the non-Jewish majority, i.e. those who are not part of Jahve's "Chosen People":
"The Jews are called human beings, but the non-Jews are not humans. They are beasts."- Talmud: Baba mezia, 114b
"The Akum (non-Jew) is like a dog. Yes, the scripture teaches to honor the the dog more than the non-Jew."- Ereget Raschi Erod. 22 30
"Even though God created the non-Jew they are still animals in human form. It is not becoming for a Jew to be served by an animal. Therefore he will be served by animals in human form." - Midrasch Talpioth, p. 255, Warsaw 1855
"A pregnant non-Jew is no better than a pregnant animal."- Coschen hamischpat 405
"The souls of non-Jews come from impure sprits and are called pigs."- Jalkut Rubeni gadol 12b
"Although the non-Jew has the same body structure as the Jew, they compare with the Jew like a monkey to a human."- Schene luchoth haberith, p. 250 b
"If you eat with a Gentile, it is the same as eating with a dog."- Tosapoth, Jebamoth 94b
"If a Jew has a non-Jewish servant or maid who dies, one should not express sympathy to the Jew. You should tell the Jew: "God will replace 'your loss', just as if one of his oxen or asses had died"."- Jore dea 377, 1
"Sexual intercourse between Gentiles is like intercourse between animals."- Talmud Sanhedrin 74b
"It is permitted to take the body and the life of a Gentile."- Sepher ikkarim III c 25 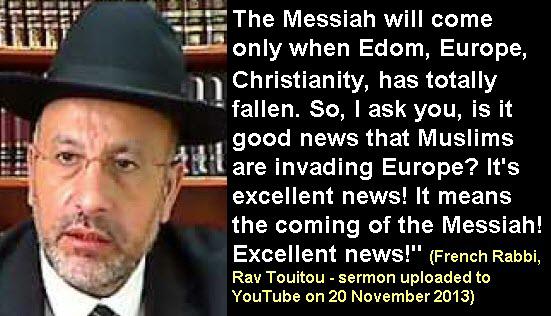 "It is the law to kill anyone who denies the Torah. The Christians belong to the denying ones of the Torah."- Coschen hamischpat 425 Hagah 425. 5
"A heretic Gentile you may kill outright with your own hands."- Talmud, Abodah Zara, 4b
"Every Jew, who spills the blood of the godless (non-Jews), is doing the same as making a sacrifice to God."- Talmud: Bammidber raba c 21 & Jalkut 772
--------
Related- "They Made Us Hate Them" Jews Admit Talmud Hatred is True
Bruce - Is Talmud Most Evil Book Ever Written?
---------Why Jews Were Persecuted
Israel Shamir- Are Non-Jews Human?
The Independent- Orthodox Children Taught Non-Jews are Evil
Michael Hoffman - The Truth about the Talmud
Goldwyn Smith - The Talmud - "An Ocean of Nonsense"
Non-Jews in the Talmud
What Jews think of Christians
As usual, Jews are in Denial

Comments for " Goyim are Animals- The Talmudic NWO"

Seriously, am I the only one, who responded to the Goyim animals article?

Holy moly. You normally get an overwhelming response, to your articles.
--

"they denied Jesus for fear of the Jews" John 9:22

The leaders of every race and religion hold the flock together by presenting an external group as the enemy. Blacks hate non-blacks, whites hate non-whites, Muslims hate infidels, Jews hate Goyim, Hindus hate muslims, etc etc. Of course, they can quote widely on this. But, God never said a word of what they are saying. And, the real enemy are these leaders who foment hate to keep the tribe together. The elites have divided and ruled successfully. And, the enemy within flourishes!

Its exactly the same kind of shit, that Hitler was trying to mindfuck, his Nazi dupes with.

There's a saying that goes, "those whom the gods wish to destroy, they first make mad".