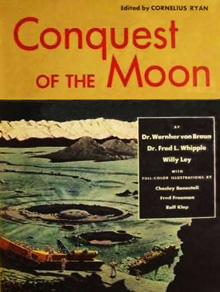 (In this book,  published in 1953, Werner Von Braun described what it would take to go the moon. It is not feasible.)
I never took seriously the reports of the hoaxed
Apollo moon landing in July 1969
until Glen sent me this note Thursday.
"The moon landing is is essentially the adult version of Santa Claus, the Easter Bunny and the Tooth Fairy. What primarily motivates them is fear. But it is not the lie itself that scares people; it is what that lie says about the world around us and how it really functions. For if NASA was able to pull off such an outrageous hoax before the entire world, and then keep that lie in place for four decades, what does that say about the control of the information we receive?"   Dave McGowan (1960-2015)
by Glen
(henrymakow.com)
The article about the movie Hidden Figures  is talking about John Glenn's first sub-orbital flight but it soon launches (pun intended) into the Apollo moon landings. Knowing what I now know, it is hard for me to sit back and not comment on yet another string of lies that most of the population has swallowed, hook, line, and sinker. 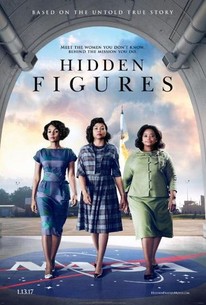 Even if the story of these young black women is true, it is all based on another whopper fed the American people, so therefore the importance of these women can be nothing more than a lie.
"Get the girl to check the numbers," said the astronaut. If she says the numbers are good, he told them, I'm ready to go."
HOAX
Excuse me if I chuckle at the above statement, but again, if people would actually do the research and check the so called facts, they would see how quickly this whole "moon shot" thing is just one more of the enormous lies that has been fed to us by the government and their controlled lackeys in the mainstream media. Before you say, "oh here we go with the conspiracy crap", I will ask you to read a few words from our (thanks Operation Paperclip) most prized space guru, the man, the myth, the legend, Wernher von Braun, (below, left). 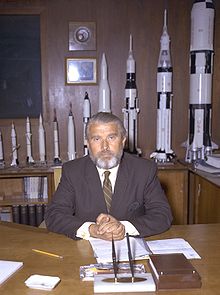 "It is commonly believed that man will fly directly from the earth to the moon, but to do this, we would require a vehicle of such gigantic proportions that it would prove an economic impossibility. It would have to develop sufficient speed to penetrate the atmosphere and overcome the earth's gravity and, having traveled all the way to the moon, it must still have enough fuel to land safely and make the return trip to earth. Furthermore, in order to give the expedition a margin of safety, we would not use one ship alone, but a minimum of three ... each rocket ship would be taller than New York's Empire State Building [almost Â¼ mile high] and weigh about ten times the tonnage of the Queen Mary, or some 800,000 tons." Wernher von Braun, the father of the Apollo space program, writing in Conquest of the Moon, 1953.
As you can see, the man who supposedly "got er done" himself stated going to the moon was an impossibility. This was even before the problem of the Van Allen belts severe radiation levels had to be dealt with .
If anyone here is truly curious about this subject, I am going to leave a link to the late Dave McGowan's series entitled "Wagging The Moon Doggie". It is a 131 page PDF file with a ton of information on the Apollo program I'm sure you have never heard, that is unless you have already read the series by Dave. If you are up for the red pill, click the link. If you opt for the blue pill disregard this transmission.
Here are a few thoughts Dave had before he dives into the whole sordid story. 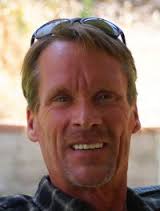 Comments for "Fake News??? Moon Landing WAS a Hoax "

In an engineering controls class the subject of the moon capsule balancing itself as it descends toward the moon surface WILL NOT BE DISCUSSED. It is like civil engineering students bringing up 9-11 in class or economics students asking about where money comes from. These topics are not for open discussion in universities and cucks (who think they are members of the intellectual elite) outside the classroom will prevent it from being discussed over beers in the pub. Many engineers have told me of the difficulty in talking about 9-11 in class. I saw the same thing when the moon landing subject came up.

About 10 years ago, the NY Times had an article about France considering a moon mission. A central problem to them was that if they land a craft on the moon, how would they know that it would not simply sink into the sand ? There isn't much gravity up there to keep sand stuck together. It would be sort of more like a cloud of dust than a solid rock according to some French scientists. This was the NY Times, not the Onion. Little tidbits are everywhere.

We need to start thinking about nuclear bombs. Would they have to be real to keep the world in fear of nuclear holocaust ? Maybe the marvel of the moon landing helped make nukes seem so much more likely. Lots of stuff on YouTube regarding fake nukes. I don't know - its out of my area of expertise.

I love "Wagging the moondoggie", I pull it up now and then just for entertainment. The reason Werner Von Braun said they needed a rocket as big as the empire state building is that the Earth's gravity, according to the conventional view, extends out to 3.9 lunar distances and the Earth's "Sphere of Influence" extends 2.4 lunar distances from the planet. A good explanation can be found in the footnotes here http://www.hohmanntransfer.com/
Earth's Busy Neighborhood
www.hohmanntransfer.com
Objects in white (except the phaseless Moon) are outside ten lunar distances (LD) at the date and time shown, green objects are inside ten LD, yellow inside Earth's ...

Thus an Apollo spacecraft could never "coast" to the moon as NASA claimed, they would have to thrust the whole way. And as you add more fuel to a spacecraft for distance, you then have to add more fuel to carry the fuel you just added and so on.
The Apollo lie is a very important one because of the much bigger lie behind it that it supports. As Niel Armstrong said at the 25th Anniversary of Apollo 11, "there are breakthroughs available to those who can remove one of Truth's protective layers." (As he looks left and right to see if security will stop him) https://www.youtube.com/watch?v=PUx1SURbb3g

I think it's important to question what goes on in our world. The MSM is full of lies, but it's important to counter-balance this by truthful reporting by the alternative media. We know the NWO commits massive crimes, but we can't paint everything with the same brush. Personally, I use in discerning what's going on around me, intellect and gut, and both tell me that the moon landings are real.

Saturn V, which put man on the moon, is the most powerful machine ever made, and made with 3 million parts. What about the tracking of the rocket - the signals captured in Australia enabled it to be televised, then there is the control room's tracking, and the the tracking by other radio receivers (including, I dare say by the Soviet Union, who would have exposed the lie, if there were one.) What about the post-mission evidence, such as the lunar modules which can still be seen on the moon? This isn't the stuff of Santa Claus. And sorry, but rocketing through the Van Allen belt in a ship won't kill you.

It's ok sometimes to celebrate the achievements of our people. In fact, not to do so can play into the hands of the NWO, as the NWO would like us to feel demoralized or helpless. Since this article follows on from the article about Hidden Figures, I'll point out that the accomplishment was primarily by those of European descent.

"Well, since the whole Soviet Union was funded by Wall Street it would be strange if they chewed the arm that was feeding them. And many have talked about the SovietÂ´s fake news with Gagarin. Actually, Von Braun was a truther and what he stated about cold war, terrorism, alien threats etc being fake threats against mankind make perfect sense just like his above comment about the moon landing.

After Stalin there was no conflict between the west and the east, except in the MSM which created yet another fake conflict. Its the same with China-Tibet today. There is just one global group of satanist people ruling the world and many of them call themselves "jews". There are exceptions probably but those are exceptions that confirm the rule.

My advice: check out Yuri Bezmenov+s interviews and "Perestroika Deception" by Golyitsin. ItÂ´s all arranged for us to swallow their deception baits. Main Stream Science is just another fake thing that people will discover soon - ie Evolution Theory. I remember my friend who worked in the military industry. After a short time he realized that the real stuff there is alien tech including flying saucers. But to ordinary folks its fairy tales no matter how many photos are presented to them.

Once again you attempt to awaken your audience to reality. Reality and Truth being synonymous. Unfortunately, we live in a culture based on lies, not Truth. Just because someone believes something is a fact doesnâ€™t make it true.

Realists and Truthers want to see the facts. "Show me the data." Interesting that your article quotes Dr. Von Braun who says it is impossible to go to the moon, yet one of your readers, who is not an expert, disagrees just because he believes it to be true. There are lots of theories that our culture is based on that are just that, theories. Just ideas in the mind of someone. I wonder if he believes there is such a phenomena as gravity. The idea there is such is just a theory that has never been proven to be a fact.

I clicked on the link to the purported recording of Kubrick coming clean. After watching it I clicked on another recording published one day later than the admission recording which refutes it as a HOAX. The refute video contains the same â€œStanleyâ€ actor being coached by the interviewer and being called â€œTom.â€

What are the chances that a couple of independent guys made a fake interview and then mistakenly offered up
this outtake that easily proves their fraud to the guy publishing the refute video â€¦ one day later.

What we have here is a deliberate dichotomy intended to feed and control both sides of the debate, the same way weâ€™ve all seen politics controlled. The average believer sees the refute video and acknowledges clearly verified coaching of the imposter â€œStanley.â€ The disbeliever whoâ€™s got a clue probably watched the interview, then clicked on the refute video and stopped watching it seconds later when the title screen displayed an â€œangel with fire for wings holding a pyramid with an eye in the centerâ€, which in turn contained a logo with the refuterâ€™s name in it.

Thus, both sides of the debate are placated by being told what they want to hear.

The Shining is Stanley Kubrickâ€™s confession.

Must have been very cramped in the capsule considering the size of the parachutes.