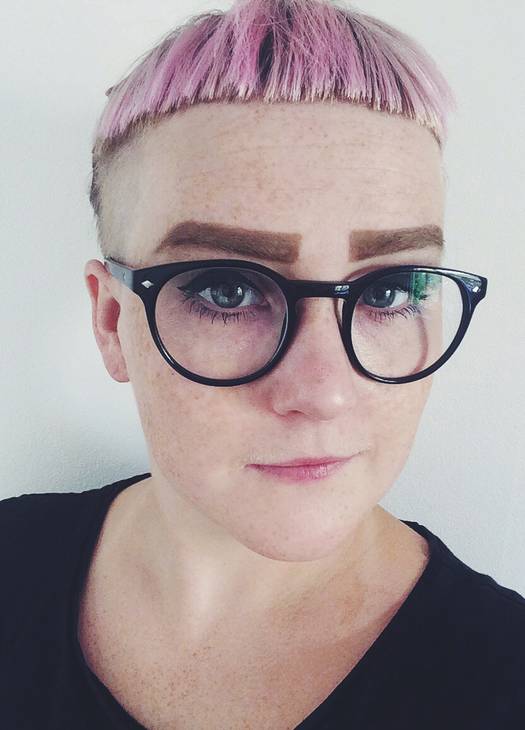 Left. Swedish woman. Fifty years ago, Swedish women were considered the most beautiful in the world.
Erik Larssen, a native Swede
despairs for the future of his country.
"If you walk around in Sweden, you will see many soulless people
with miserable face expressions and earphones. You see a lot of
obese Swedish people and the Pride festival in Stockholm is enormous.
While Swedish people claim to be 'happy,' they are really miserable and lonely."
Is Sweden a harbinger for the West?
By Erik Larssen
(henrymakow.com)
War is usually associated with guns and missiles but a mental civil war where man-woman, rich-poor, locals-immigrants, left-right politicians fight each other is just as devastating as any physical war.
Sweden is the frontrunner of the NWO and has a fully dedicated Marxist mainstream media (MSM) trying to undermine Swedish nuclear families and all forms of traditional culture and religion. Voltaire said that whoever you are not allowed to criticize is the one that rules you. Cabalist Jewry rules and hides behind the shield of Judaism, a religion they have destroyed along with numerous ordinary Jews. After almost 100 years of warfare in Sweden, we see the devastating effects today.
Sweden is widely considered a top-ranked country for family life. Yet Sweden is also a world leader in terms of divorce rates (47%), single-parent households and depression among young people.
Indeed, Sweden is a terrible place for children these days - this is the reality. The main reason is that Swedish parents donÂ´t know family values and donÂ´t raise their kids in a good way since they have been brainwashed by Marxism. The result is a generation of weak and sickly children without basic knowledge about human life.

In 2015, only 23.8% of Swedish kids were born to married parents. An astonishing 47% of all Swedes live in single households. In 20 years the depression rate among Swedish kids has tripled.  Most Swedish boys are unsocial, addicted to computer games and have not learned basic self discipline. Furthermore, most Swedish parents buy into all vaccine schemes making the kids even weaker. Sweden has received more immigrants than any other western country (per capita) making Swedish kids feel even more lost.
COLLAPSE OF NUCLEAR FAMILY AND TRADITIONAL BELIEFS
Many Swedish people are naive, reserved and kindhearted. If you want to see true evil, check out the Swedish MSM which now promotes LBTG, atheist, materialist, sexist, feminist, anti-Putin and fear on a huge scale. Swedish MSM is controlled by the NWO mainly through the Illuminati Jewish families - and nobody dares to criticize them. First of all the Bonnier family (Bilderberg Jews) owns the largest parts of Swedish media and television and secondly there is the HjÃ¶rne crypto jews owning a big part. Other players are either controlled from the US (Schibsted) or by Swedish politicians or unions (Mittmedia). 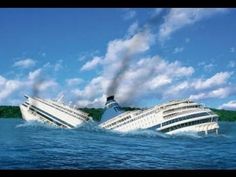 Left. The disaster of sinking M/S Estonia in 1994, killing around 800 people, was never fully investigated and remains an enigma to the public.
In Sweden, you are regarded as a fool if you believe in God or divine creation. This is due to a Marxist ideology destroying the school system, children, State, Church and top politicians. The murders/"suicides"/disappearances of Ivar Kreuger, Raul Wallenberg, Olof Palme, Anna Lindh and KSI (top secret intelligence service) head Lars Ericsson adds fuel to the black smoke of Sweden. PalmeÂ´s autopsy protocol is still kept secret while LindhÂ´s murder looks like a psy op with a young assassin very confused claiming he was controlled by an inner voice during the murder (which we never have been able to confirm on film).
The "Sweden Democrat" party is rising fast and they are against mass migration - but they are Zionist controlled opposition. The same goes for the major alternative media sites. Swedish people are scared and do not react even when skeleton bones fall out of the Masonic HQ at Stockholm. Basically, there is a lack of courage and information in Swedish men.
SWEDISH FEMINISM  MARXIST ATTACK ON FAMILY
"Anyone who knows anything of history knows that great social changes are impossible without feminine upheaval...including the ugly ones."(Karl Marx)
Fifty years ago, Swedish women were considered the most beautiful in the world. TodayÂ´s Swedish women have been brainwashed into pursuing career and "equality" making them disregard feminine qualities. Many women behave, walk and dress like men. A foreigner asked me why Swedish women are terrible while Swedish men are good.
Another foreigner asked me why Swedish babies are so unclean. A French woman told me that Swedish dress style is different (uglier) from other countries. We canÂ´t blame Swedish women but nowadays they donÂ´t understand what is important in life - a harmonious family and traditional beliefs. Of course there are exceptions.
Swedish women are usually dictators at home and the man will be effeminate. Swedish men quietly endure their misery until she wants a divorce. A friend from the North told me that no Swedish women wants to stay there anymore so his village is full of Thai and Russian wives.
If you walk around in Sweden you will see many soulless people with miserable face expressions and earphones. You see a lot of obese Swedish people and the Pride festival in Stockholm is enormous. While Swedish people claim to be "happy" they are really miserable and lonely. Swedish people canÂ´t imagine what is going on beyond the scenes and they are completely unaware of the evil forces behind their MSM, Government and Secret Police. Some insiders call it the most corrupt government on earth controlled by Mossad/CIA.
THE NEXT STEP- PSYOPS, MARTIAL LAW AND BAD WATER 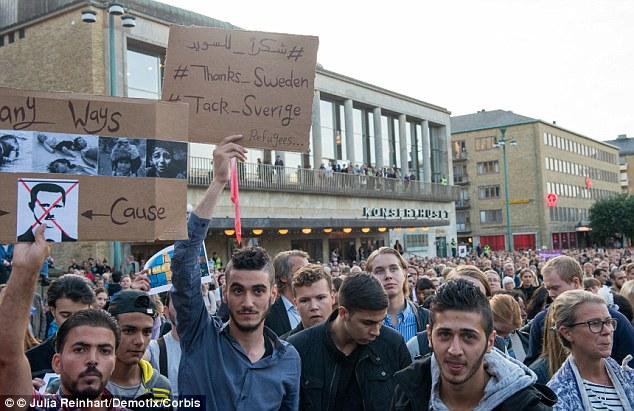 Left. Muslim immigrants are used as scapegoats in Sweden for terror actions
The Swedish government and media are fighting Swedish people. It doesnÂ´t matter which party you vote for, they are all controlled by the same evil power so the end result is the same.
The hallmark of a nation run by Illuminati Jews is that the government tries to destroy traditional culture and nuclear families. The current forecast for Sweden is more psy ops to instil fear of the Muslims. This will result in martial law and a zionist NWO puppet dictator. Swedish people will support anyone that promises "safety from the Muslims".
Watch out for the drinking water - large cities will be easy targets and Swedes drink the tap water in big cities. The water poisoning will be a global affair and itÂ´s the easiest way to depopulate.
UNITY AND FAITH ONLY HOPE
A country without patriots, courageous men, unity, religion or traditional principles is doomed. Many Swedish people are kindhearted but they are unaware of the Marxist brainwash which destroys them.
Everyone can see where Sweden is heading and if some good people unite perhaps a miracle can take place. If patriotic Swedes working in secret services such as KSI, MUST, SÃ„PO and FRA realize that they and their country are being destroyed by their own Marxist employer - the NWO - perhaps there might be unexpected news from Sweden.
--
Related
Sweden to Deport 60-80K "Refugees"
Every Teen in Sweden to get "We Should be all be Feminists"
First Comment from Dan:
Two things Americans must understand about Sweden, is that it's against the law to question anything - even in the most meek, apologetic terms.  Boys of Swedish ancestry aren't wanted at all by the Swedish government.  Showing normal male character traits at all gets boys turned over to school psychologists who prescribe medication.
News is heavily censored in Sweden, to the extent that Swedes have been lied to about the reason they've gone from being a traditionally rape free society thirty years ago to be the 'rape capitol of Europe'.
Welcome to Sweden - 1.6 million views

Again a great and important article on Sweden, thanks!

Here is my explanation for how the Swedes allowed their country and culture and traditions to be destroyed:
The kindest people, surrounded by again some of the kindest people; are totally defenseless against the greatest of evil, because for them it is impossible or near impossible to even imagine, or believe in the existence of; really, really, great evil. I'm not sure if there is still time to get Sweden back.

I came sadly to the conclusion that it is the weakness of Europeans, who have allowed themselves to succumb to these teachings. Look at the reality here? We were 'supposed' to have fought WW2 to stop the creation of an authoritarian culture and protect our nation. We have allowed exactly that, which we fought against, to happen.

There is the argument that this has most certainly been Fabianism at work (the drastic change of society over a period of time, not instantly), I agree, but again, once you see a fire break out in your house and choose to do nothing, then it's your own fault for not taking action. People should have instantly taken notice when their government instituted 'race laws' (legislation not law). This should have been an instant clue as to them about to open the floodgates of immigration into the land. As long as you control your land under a common law, then you do not need to bring race into it whatsoever. Any attacks on immigrants will be treated no differently as to an assault charge. As soon as they legalized homosexuality the alarm bells should have started ringing. As soon as politicians along with professors, with a history of Marxist beliefs, were allowed into power, the people should have resisted.

This is the reality. Far too many people are distracted by TV, Films and sports to actively want to stop the demolition of their societies. They therefore not only have themselves to blame for the demise of their lands, but also very much deserve the governments they have and society they live within.

Lord what a depressing article!

In my dealings with Swedes I was singularly unimpressed with them Germans by comparison are robust & hearty.

No God, no soul. Its as simple as that.