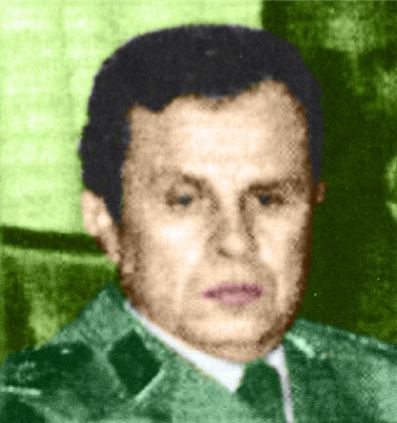 Left, Mohamed Mediene ("General Tewflick") the current head of the Algerian security apparatus, the DRS - Departement de Renseignement et Securite - has been the behind-the-scenes master of Algerian politics for more than two decades.

The example of Algeria shows that everywhere public policy is directed by a hidden hand, and pursues a single agenda.  This article will explain why Algeria was spared the "Arab Spring."

"Like every Freemason government around the world, feminism is imposed from above. Today, more than 40% of judges are women in Algeria and the female percentage, although thin outside the justice, education and health, is in constant increase in all areas of public life." 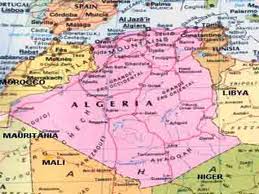 by  N Thor
(Translated by David Masada for henrymakow.com)


One needs to understand that in all countries where Freemasonry is well established (like France),it is behind all the corruption, financial scandals, premeditated murder and mafia. The "brothers" and "sisters" Masons are always above the law. Let's examine the similarities between the policies of Algerian dictator General Tewfik since 1993, and the agenda of Freemasonry:

1.  Tewfik represents  the interests of the Jewish Banksters in Algeria. The economical process of this Satanist general determined to destroy Algeria in favor of world government is typically Masonic. He destroyed the local industry and sold it to domestic firms and multinational mafia. He signed association agreements with the European Union, planning to rent the majority of our best agricultural land to the Banksters of Paris as was done with the most important sources of mineral water. He also has attempted to denationalize hydrocarbons and offered the port of Algiers to Dubai Port World (DPW), made the import project of Sudan meat aborted (the Freemasons hinder the development of inter-Arab relations), opened the country to the Banksters, headed by Paribas and SociÃ©tÃ© GÃ©nÃ©rale ("banks command the economy" said political scientist Henry C. Moore). 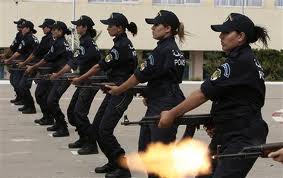 2. Like every Freemasons government around the world, feminism is imposed from above. Today more than 40% of judges are women in Algeria and the female percentage, although thin outside the justice, education and health, is in constant increase in all areas of public life.The number of these politicians women (soon we will also have military women everywhere as well as footballers and boxers in all cities) is increasing slowly but surely across the country.

And the conclusion is striking: the authorities' commitment to put more women in positions of political, economic and technical power across the country is proportional to their ability to muzzle the free press. (Justice that is powerless when it comes to embezzlement of billions of dinars is so effective against innocent citizens). That is the policy of the Freemasons: push feminism and thoroughly controlling freedom of the press around the world.

Today in Europe, America (from Chile to Alaska) and Australia, criticizing this policy of thrusting women in positions of power is much more dangerous than the critique of Zionism! One goal of this feminism from above is the destruction of traditional family to accelerate globalization. 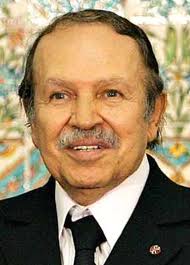 3. President Bouteflika, left,  has declared he believes in an Abrahamic religion (not Islam). The Jewish religion is a Freemason project through which they want to mingle Islam and Christianity so that the two religions reach a mutual tolerance allowing from one hand an explosive growth of Muslims in the West (to destroy the Christian majority over there) and, secondly, an increase of Christians in Muslim countries (to destroy or at least weaken, the Muslim majority here), and all this to force those religions to adapt to globalization. Masons call this anti-nationalism, humanism, which means turning our back to the racial/national element and focusing on the human species: one is a human being and that's enough, hence their preference towards Islamists and "Islam/Muslim" terms over the term Arabic.

An example is the case particularly demonstrative of Erdogan in Turkey: the secret mission (= Masonic) of Erdogan party is the destruction of Turkish nationalism. The latter, made powerful by Jewish bankers in the years 1915-1940 to weaken the Arabs proved to be the main obstacle now facing the Banksters willingness to extend their Zionist project of the European Union to Turkey (to approach a Jewish state located at heart of a hostile Arab people). Thus, history has proved that the aggressive policy of Nasser towards Islamists and Communists was right.

4.  The incompetent Boubakeur Benbouzid is still Minister of Education and this since Tewfik became patron of the DRS in 1993. The same applies to Ahmed Ouyahia. General Tewfik, their sponsor, assassinated that same year Bordj El Bahri Khalef Abdullah (Kasdi Merbah) Khalef Abdelaziz and Khalif Hakim and their companions Abdelaziz Nasri and Lhachemi Ait Mekideche. Also in 1993 (July 4th), he murdered Redouane RÃ©dha Sari, doctor in nuclear physics at BouzarÃ©a, Algiers (high-tech weaponry is secretly banned of Arab countries). In 1994, Redha Malek, head of government, refused any idea of â€‹â€‹amnesty for terrorists; Tewfik dismissed him the same year. In 1997, Abdelhak Benhamouda, great trade unionist and patron of the UGTA, categorically refused national concord, Tewfik murders him on January 28th 1997 (over 6000 criminals were pardoned from 2000).

5. The gradual marginalization of the Arabic language and the promotion of Hebrew in Algerian universities under the pretense of "linguistic diversity".

6.  Tewfik wants us to build nuclear power plants! Ministers and puppet-General stated that nuclear energy is the future as our oil reserves are limited. But it's hiding the fact that Jewish Banksters in Europe and America, to make more money on the back of Algeria, want to sell these nuclear power plants, and it is also hiding the fact that the uranium reserves are limited and also much smaller than the gas-oil reserves. Experts have calculated that if we begin to replace oil and gas by uranium, reserves would be exhausted in a few years. And do not forget either that the problem of nuclear waste, toxic for tens of thousands of years, has not been solved, despite decades of research. So, could Algeria find itself becoming a trash for a future radioactive waste?

7. The retrograde university reform called License-Master-Doctorate (LMD) imposed on us recently is a Freemason project initiated first in Europe through an idea of â€‹â€‹the Jewish Freemason Jacques Attali. The ultimate goal of this project is the standardization of all universities in the world according to the same structure. That way, it will be much easier to pick up the pace towards the uniformity of thought and ideology to go towards a powerful world government. 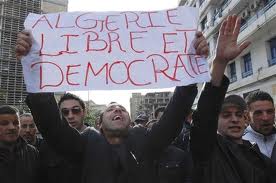 8. Marginalization of the noble arts (painting, classical music, singing traditional song, traditional sports, writing ...) and books at the benefit of hard sound (El Chtih wa Erdih) and/or sounds of trance (El Haoul), with billions of cents spent every week to keep the flock under hypnosis and destroy the past... unless this past contains pro-globalization element, Judaism, or any kind of perversions (homosexuality, feminism, etc.)

9. Rotary Club, a "charity" organization that serves as a cover for Freemasonry, was expelled from Algeria by Boumediene. In 1993 the club returned to Algeria by the front door.

10. The abolition of the death penalty in Algeria since 1993. In the Masonic science no criminal should be executed, except in the case of someone who is a danger to Freemasonry or globalization. They must eliminate the sense of evil and good from human brains so the herd losing more marks will be more manipulable.

11. Under the pretext of human rights, our police and our justice became a daddy to the culprits and criminals, to the point that there is no more authority! Assaults and crimes are increasing in all Algerian cities. Meanwhile, the police state blossom all over the country in the Masonic way. 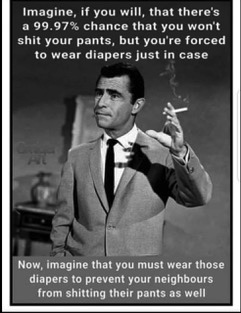 12. Finally, we have Cheb Khaled and Oriental Arab singers reprising John Lennon song Imagine! Be well aware that this song is the national anthem of the future Masonic world government. In Imagine Lennon said it's silly to believe in evil and good (or Yin and Yang): "Imagine all the people living for today", that is to say, do as you please even if the entourage judges it as public indecency or a crime because there will be no judgment after death.

This is consistent with the Masonic religion that says the good/evil or male/female concepts have no meaning, hence the abolition of the death penalty or the institution of gay marriage.

Lennon said: "Above us only sky", that is to say that God does not exist, and he said: "Imagine there's no countries", that is to say, there should be one country in the planet and "and no religions too", that is to say that there should be only one religion (a materialistic religion) in the world... Does Cheb Khaled know all this? And does he know that John Lennon was a Freemason Satanist (it is said that his second wife Yoko Ono introduced him to Satanism)? And that Lennon was murdered by Freemasons to make him a legend and a god?

Reading this article gives me a strong conviction that Freemasonry will also spread to English colonized African countries,especially
Nigeria.A simple,clear hint is the green colored triangle,a symbol of the masons,on the Nigerian #1000 note.And it is speculated that this
note was contracted for minting/printing in the US.Also,i had read on some Nigerians being speculated to be members of the Illuminati,including president Jonathan. To me,the Illuminatis have not exempted infiltrating all nooks,crannies and crevices of our world. God
will help us all.

Abortion is a very dark crime against defenceless unborn human beings created by God, is slaughtering of innocents, is feminism and arrogance tempting to replace God and is a revival of ancient ritual child murder offered to the godess (ex. godess Tanit). In addition abortion is also pure social engineering.

I think that is a mistake to focuse pro-live campaigns on psychological problems and traumas of women who abort a human life. It's a mistake to appeal to these women selfishness instead on their repentance. You haven't to abort because is a crime and not because may be you're going to feel bad. Western Civilization is gynocentric and tend to see women as innocent and pure beings, but they are just human beings like men and therefore they're full responsible of their acts. Women who abort commit a crime and that's all folks.

If a woman aborts and after she regrets and seek the forgive of God with her heart, for sure God forgive her sin. I encourage these women to thanks God and fight against abortion and against feminism.

It's a good new "Personhood" legislation in North Dakota.