Canada Gets another   Minority Woman GG 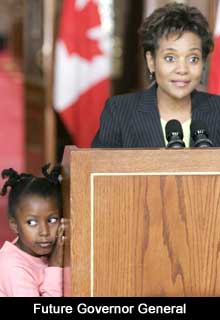 The Governor General of Canada is the Queen's representative and symbolic Head of State. She can dissolve parliament but mainly her role is to represent Canada to the world and to ourselves. After six years of Adrienne Clarkson, a minority woman who worked for the Canadian Broadcasting Corporation, the Prime Minister has appointed Haitian-born Michaelle Jean to succeed her, another minority woman who works for the CBC. Is this the real meaning of diversity?

I have no trouble with minority women being GG. I do have a problem with one following another. It was time for a white male or a white female, or even a black male. (According to the 2001 Census, Blacks, East Indians and Orientals make up just 10% of the population. Prime Minister Paul Martin calls Canada a "nation of minorities" when in fact 85% of Canadians are of European origin.)

Furthermore, in the past, the Governor General was a person who had accomplished something. S/he was a person of authority and distinction. Ms. Jean is an obscure journalist whom Canadians have never heard of. She is the hostess of seldom-watched cable show that airs documentaries.

As recently as 1985, women "of color" were at the bottom of the social status ladder in Canada. Then, social engineers at Tavistock or the Rockefeller Foundation realized they could undermine males and whites at the same time by promoting colored women. Governments, corporations and universities favored them in employment and admissions. What was portrayed as stopping discrimination against colored women became discrimination against whites and males. In 10 short years, they went from maids to managers in public perception. Magically, they shot to the top of the status ladder, trumped only by colored lesbians. 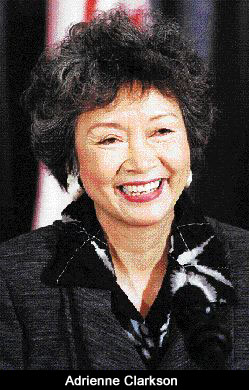 This explains how an obscure black woman can become Governor General of Canada. The way to stop discrimination is to be color-blind, not affirmative acting. Obviously the mantra of equality is a ruse to promote certain groups and repress others. The globalists don't really care about the people they promote. They serve a purpose, to "destroy any collective force capable of challenging us." (Protocols of Zion(5-11)) (A forgery? What would you say if you were caught red-handed?)

Ms. Jean accepted her appointment at a press conference with the familiar mind-numbing lip service: a pledge to make the rights of women, youth, aboriginals and the "disadvantaged" a priority.

"I know that I will put all my convictions and my strength toward defending people who need to be defended in terms of the dignity of women, dignity for freedoms, and dignity for the disadvantaged," Ms. Jean said.

Clearly, the politics of diversity are the politics of division. The Governor General should represent all Canadians, not just the (selectively defined) "disadvantaged." It's their age-old tactic: guilting society so it'll accept anything.

A week later a controversy erupted when it was revealed that Jean and her documentary film-maker husband supported the Quebec separatists in the last referendum. A spokesman for Prime Minister Martin said, "we do not make people crawl on their bellies to prove their loyalty to the nation." No wonder pundit-whores cooed that she was a head-of-state for a "post national era."
(There are also reports she is a dual citizen of France.)

Canada's liberal government is pursuing the racist and sexist Globalist attack on Europeans, males, and European males in particular. It is an attack on the Canada's European heritage and identity.

Ms. Jean's appointment is outrageous and Canadians should block it. It does not truly reflect Canada's diversity and she doesn't merit the position.

Comments for "Canada Gets another   Minority Woman GG"

Per your article on Canada GG: Black women have always been in the bottom rung of the social order, right? and you want it to stay that way? right?

I use to respect your articles, but I don't any longer. Apparently you hold the view that whites are the chosen ones that want to be undermmined and blacks are being used as a patsy.

Satan can not force us to do anything. he capitalises on our own injustices, vanity, cruelty and racism. be careful before you begin to do his bidding too.

I don't think you can win with this. Ms. Jean, of whom I had not heard
until yesterday, is apparently a rather attractive youngish woman, which is
probably good enough for most white males. I mean, would you really prefer
some boring superannuated pol. from Alberta? The bigger issues, such as
loyalty, judgement, knowledge of constitutional law, etc., probably don't
exercise many people. One thing though, if we're to have a succession of
minorities represented by the G-G, why not an aboriginal minority?
Appointing immigrant minority representatives, but not aboriginals,
suggests we are still colonists at heart, little better than the Israeli
settlers, although, unlike the Israelis, we have the advantage of
overwhelming numbers and a rather docile aboriginal population.

It was the reaction to the appointment, not the lady herself, that shocked me.

She "embodies the new face of Canada," burbled the Toronto Star. She is "a poster child for modern Canada," according to the National Post. And our sister paper, the London Free Press, declared: "Now, three of the last five governors general have been women, which is more representative of a new Canada that encourages equality, rewards aspiration and welcomes the world."

Excuse me, but what exactly is this "new" Canada? And what was wrong with the "old" Canada?

The feeling has been growing in me for quite some time -- long before Jean's appointment -- that there is indeed a "new" Canada out there and that I am not terribly welcome in it.

Paul Martin so blandly stated, and I paraphrase, that "[Jean] is everything that is Canadian." Really? Well, as I recall, hundreds of thousands of people, like my parents, came from Europe and settled and developed this country. Now we relegate the original pioneers to the dustbins of history and the old memory hole, while we extole the virtues of the recently landed. By that I mean, anyone that arrived in Canada in the last 40 years or less. But then it's pc to conveniently ignore the fact that most of the arrivals on our shores in the last forty years came from Third World countries. Now that is a fact and Canadians accept that, by and large. But to suddenly say that these are the people that reflect what Canada is, is a baldfaced lie and unacceptable. This is not an either or situation. Canada is a land of immigrants and refugees, true, some of whom are genuine while others have taken advantage of Canada's lax immigration laws and lax security checks. Many bogus refugees with criminal records from their countries of origin have come to Canada and slipped through the cracks. The politicians turn a blind eye and a deaf ear to such an abuse of the system in return for ethnic votes. That is the sad state of affairs in Canada.

I think that the appointment of miss Jean is highly questionable as well - not simply because she is young, inexperienced, undistinguished by her accomplishments, and a member of a visible minority group, but also because she is a member of CBC News - a government mouth organ. The CBC represents a very leftist view in all its forms and on all issues. To say that it is influenced by government to some extent would be understating the obvious.

responded to the CBC comments for this appointment, and I suspect that because I quoted the Constitution that the Queen herself is to pick the Governor General and not the PM, as the Liberals and Conservatives have been doing for years, they did not 'post' or 'approve' of my comment.

The Governor General, like the Senate, is not supposed to be a 'rubber stamp' of the governing party. It is to be a second and third reflection of the legislation put before it.

As it is, there is no significant checks and balances in the governing process of this country. It is NOT a democracy, but rather what I call, a 'demoncracy.'

Paul Martin is nothing but a Mauice Strong or Jacob Rothschild patsy. The man has no character whatsoever. While he may speak better than Jean, he is as phoney as a three dollar bill.

Canada, is OWNED by Rothschild, that is why they switched the colour of our flag from blue to red. Red is Rothschild's colour. Canada is already a conquered country.

We have an Armed Force that may be enough to protect Newfoundland, but nothing more. We have one of the largest land masses in the world, and the minerals and natural resources that are high in demand, and which China would just love having, and yet, the government goes around as if they haven't a clue watching more for the next vote rather than attending to the problems on the horizon.

I have watched Ms. Jean's documentaries on various occasions.

I consider her to be a class act and entirely acceptable as GG if we have to have one.

The only white male I am interested in seeing made GG is myself. Beyond that, I am ambivalent about the choice. Could be a martian for all I care.

We may have passed the 'point of no return' as to being able to take on the
beast through the general sought means of bringing about change; however, I
am content with setting brush fires within the minds of all those I have the
opportunity of coming into contact with.

Spread the word to all those that love truth and freedom. Expose the folly
of our so called leaders for what it is; a most heinous form of treachery,
intentions not withstanding. Let them have their parades and in the meantime
each and every one of us that loves truth should seek to enlighten those
around us as to the real agenda.

No matter what a tyrant does, it does not change the fact that each and every individual is
the master of their own life if they so choose.

May God bless you in your good works,

I think the selection of this Haitian-born
broadcaster (yet another cbc 'reporter' chosen!) as the next Governor General serves another purpose. You know Canada is about to join into a Pan-American union, like the European
Union.
What better a governmental liason showpeice to parade than
an easy on the eyes woman from a Caribbean country (joined
at the hip to the latin Dominican Republic) nestled between
Central and South America. What is this, sugarcoating the
bitter pill of an 'economic Union' no sane man could
possibly want?

Signed,
A white guy in a 'tolerant' world