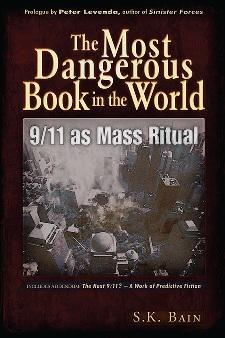 Comments for "9-11 As Occult Trauma Brainwashing"

Over here in Poland the Main-Stream Muddle Media have already become all but unchallenged brain laundromats (sic). They are foreign owned and their so-called journalists want to be on the safe side, i.e. keep their jobs, luxury prostitutes' big payoffs and pamper their sick egotistic drive to earn a high profile face and tongue. So they follow a simple 'cover your ass' (CYA) tactics.

Hypocrisy is out of control, independent investigative journalism is dead or relegated to some local
bureaucratic idiocies which are politically harmless to PTB.

In effect, news reporting is infested with half-truths which are even worse than outright lies, because with all the theoretical decor/slogan of free press in a democracy, deception earns credibility by stealth in stupefied sheeple's minds.

On the other hand, the corporate 'masters' and their puppet 'masters' up to the psychotic pyramidal top with its all-seeing eye must be treating Poland as a warm-up backyard and
the subordinate so-called 'elites' of this backyard as obedient (and funny) French poodles
.
For instance, the poodles have now been told to hike the access fees for use of radio spectrum as well as the annual (digital) broadcasting concessions by a 1000 (one thousand)
per cent, which will effectively keep in business only the big multinational corporate owners of Polish Main-Stream Muddle Media. No more air room, no more free airtime say for any "indies".

This ingenious broadcast market entry dam is definitely better than the old commies' censorship. The MSMM laundromats must reign supreme! Congratulations, comrades
Ill-Womb-Inati! The sheeple of all countries come together!

If you want to buy a book that really lives up to the claim of being the most dangerous in the world, go for Jyri Lina's "Under the Sign of the Scorpion", a book who he had to print as his own publisher (no publisher in the Western World seems to have the guts to print it). Jyri was born in the former Soviet occupied Estonia, and as a dissident he was thrown out of his native country by KGB (Jyri was "free" to choose either a KGB-jail (psychologic ward) or going to "Kartago" (Communist idiom for Western World). He choose the latter going to Finland, but later on was warned by the Finnish security police that he had to go further to Sweden.

Jyri have written two books on secret societies and their involvement in past and present history. His "Under the Sign of the Scorpion" is more directed to what happened in relation to the Jewish takeover of Russia in 1917, and the following bloodbath on Christians, and other groups and individuals, who was considered a hinder to the new regime. This book is most dangerous in several aspects, one such is the info. that the order to kill the Tsar and his family, not originated from the Bolshevik regime but from Wall Street, New York through the US representative office.

The other book, "Architects of Deception", is a book more directed to the general history of Freemasonry, their origin and their criminal manipulation of history. Both books, as well as the author himself, is suppressed. You can't find the "Scorpion" on book-shelves in Jyris new country (Sweden), and you can't either find the one in a library [now you might begin to understand why Sweden today, in several ways might more be seen as a banana republic, than the liberal Democratic society you thought). Either can Jyri hold open lectures in Sweden about Freemasonry and other subjects, and is now 'back in time' to holding semi-underground lectures, similar to the ones he thought he was leaving behind in Soviet-Estonia. (This come's from the Swedish security police [SÃ„PO] playing under the sheet with EXPO, a Jewish controlled fascist organisation, being todays "brown-shirts" and taking their orders from Jewish B'nai B'rith.)

The extreme dangers of Jyris books (especially "the Scorpion"), is substantiated by the action of Jewish controlled Amazon.com to pretend it out of sale (today listed as "Currently unavailable") and sometimes leveling the price 10 times the original price (or today listed as 5 used from $115.00).

This at the same time that you can by the book from Texe Marrs in US ($35) or directly from the author himself. So do yourself an effort in understanding how the world really is run and who runs it, by buying this book and at the same time enjoying having possible the most dangerous book in the World at your book shelve.

I haven't read this book, but I can say that the definitive biography 'SECRET AGENT 666: Aleister Crowley, British Intelligence and the Occult' By Richard Spence is mandatory reading. Spence was a consultant for Washington D.C.â€™s International Spy Museum.

Crowley was recruited as a student at Cambridge. He was a member of an ultra right-wing secret society called the Primrose League that spied on political liberals. He was sworn to the monarchy

The so-called "Occult" has been a cover of secret agents all the way back to Queen Elizabeth the First's personal sorcerer Doctor John Dee.
Dee purported to be in contact with a demon named Enoch, who gave him the Enochian magick system and alphabet still used by chaos magickians today. But Dee was also Elizabeth's chief of espionage. He signed his secret memos to her with his code name, "007". That's where the author of the James Bond spy thrillers got it. Ian Fleming admitted late life that he'd been an MI5/MI6 spy and public relations man since WWII.

The 16th century playwright Christopher Marlowe was also recruited at Cambridge to spy for the network of Elizabeth's Minister of State Francis Walsingham, whose espionage net extended as far as Constantinople and Algiers.

Aleister Crowley didn't create the Ordo Templi Orientis. It was created by , a Prussian spy and Freemason Karl Reuss as a secret branch of the Knights Templar, subservient to the Prussian secret police. Reuss was exposed as a spy by the left-wing daughter of Karl Marx. In 1912 Reuss initiated Crowley into the OTO and made him the head of the Order in Britain and later America. Crowley had a complicated cover which was backed up by the British press. He was a master of programming networks of mind controlled dupes. His public image as "the wickedest man in the world" was meant to attract gullible but intelligent and wealthy people eager to be corrupted in Crowley's 'naughty' cult.

He turned it into a vehicle for recruiting useful idiots to train as semi-knowing agents. OTO is rife in the Music industry, the acting industry - but also in the weapons development industry, and information technology industry - especially in game development. I know this first hand, but you'll have to take my world for it.

While I agree with most of what "Bain" writes, I think he is wrong on the score about the victimÂ´s "knowing" beforehand and sealing their own fate due to the perpetratorÂ´s fear of "bad karma".

The Elites are the embodiment of bad karma! This is what they live for and thrive on. Bad karma, give me a break!

I would venture to say that most Elites subscribe in one way or another to the precepts of Nol Kidre, in that their myriad sins are atoned for through a prayer invoked once a year. These types of cleansing rituals take place at Bohemian Grove as well. This is more than well documented.

Hence, there IS effectively no sin and therefore no bad karma to be afraid of to their way of thinking. They are free to do what they want with absolutely no consequences. They are entitled. The victims are not.

Therefore the victim is bound to die. "Showing" the unwitting victim aforethought what is positively to happen to him is not offering a choice but rather mocking the victim in his unknowing position. This is cruel sadism. That is what weÂ´re talking about here and not murder of innocents because they deserved it. This latter is exactly what the "Elites" want us to think.

When i was in high school the teacher received a call from the office to turn on the TV just in time to watch the towers fall. Who told the principals office to instruct the teachers to do so? Talk about traumatizing, i remember being in a trance watching the news for days.

Todays article mentioned assassination's. Bill Cooper was killed in 2001. I have been researching for a long time and revere what Cooper says as true and find him to be a litmus test for honest Truth seeking websites. Alex Jones cringes at the name "Cooper".

I think obama will win because of the welfare state. The has terrorized us with martial law, has proven to be tough on "Arabs" and wants to organize us into socialism/communism/totalitarianism so who better for us to Deify and lead us to yet another ritualistic blood bath to restore our "Potency". (God help US. If you don't understand what I'm talking about then read on.)

I was just yesterday studying occult ritual abuse of children and found the webpage below.

"The psychodynamics of cultic torture and sacrifice of children are the same whether performed by small contemporary groups or by whole countries in the past. They involve the following steps:

(1) Regression due to fears of individuation,
(2) Trance states and dissociative mechanisms such as assumptions of multiple personalities by cult members,
(3) Merging with the leader as a defense against engulfment by internal figures, using projective identification to relieve them of Intolerable feelings,
(4) Deification of the terrifying leader as a defense against personal helplessness,
(5) Organization of cult hierarchy into totalitarian structure, in order to carry out
(6) Torture and sacrificial rebirth rituals that reenact childhood and fetal traumas, recapitulating the drama of absolute power over absolute helplessness."

I believe brother Nathanael of www.RealJewNews.com when he says "Only a Revival of Christianity Can Save US!"

The entire 911 operation was scripted by the illuminati using Orwells 1984, and the heart of the book centered around room 101. Orwell described that any person or the masses could be broken and the trigger mechanism was fear, be it any individual fear, or a mass state of fear involving a traumatic event.

This would destroy the will in the end to submit to the state begging for protection from the unknown element, thus becoming slaves and compliant to give up to the state demands for security and a loss of freedom.

Fear was the mechanism by the illuminati to bring down the individual or masses to accept becoming slaves in the name of security; so give up all, and one day you too will love Big Brother. The event of 911 was nothing more than a psychological operation to break the soul to submit using fear as a catalyst, as a means to an end, to bring about the New World Order.