What Does Betsy DeVos Mean for Common Core? 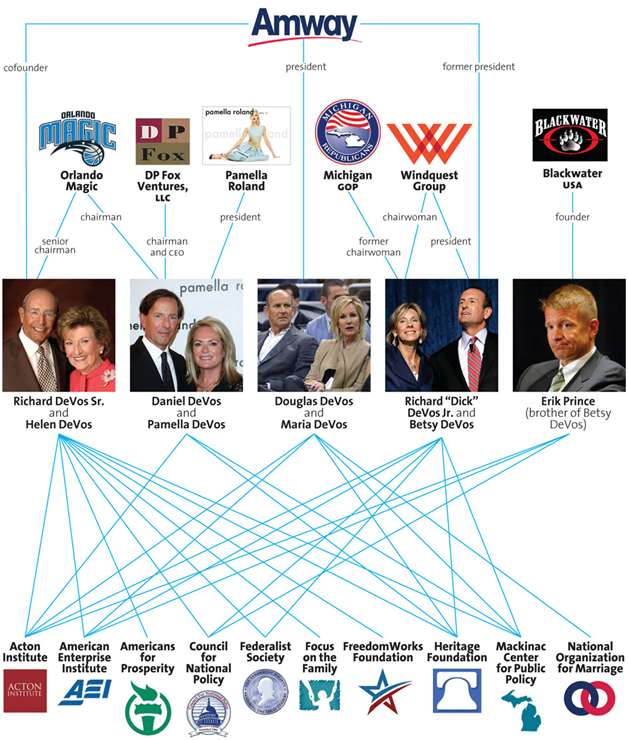 It appears that Betsy DeVos will spell the death of the Communist Core curriculum but the far-right billionaire might also open the door for
the privatization of the American education system. Anything is
better than the system of Communist indoctrination now in place.
by Hamish
(henrymakow.com)
Betsy De Vos, Trump's nomination to the position of Secretary of Education is another suspicious move by The Donald & co.
She has a history of directly supporting educational national standards including Common Core, despite her sudden turnaround on that specific iteration.
Is she an Illuminati go-fer?
Heavy.com reports that: 'The reason some conservatives are concerned: DeVos was on the board of the Foundation for Excellence in Education (FEE), which was a group led by former Florida Gov. Jeb Bush that promoted both school choice and the Common Core education standards.
In fact, that FEE thinktank was founded by Jeb Bush and is now Chaired by Condi Rice. The foundation has received money from Bill Gates, Michael Bloomberg, and Newscorp among others. The Bill & Melinda Gates foundation recently announced 'it is "doubling down" on its efforts to help teachers adapt to the Common Core education standards.'
Clearly, Devos has rubbed shoulders with the bigwigs pushing this agenda--how much was rubbed off on her?
In  Rotten to the Common Core, Joseph Farrell lays out the objections to Common Core:
'Standardized Testing in America has a troubled history. Its agenda has long remained veiled behind "expert opinions" and "latest studies." The future of American education stands in a tradition of social engineering, data mining, pseudo-psychology, and dumbing down classroom strategies.
Common Core promises great advances though its true benefits are monetary ones for software companies and partner politicians. The goal of Common Core, or rather, of its assessment process, is nothing less than a massive addition to the power of the surveillance state, to the privileged corporations destined to manage it, to the further drastic curtailment of our civil liberties, and to the eventual inhibition of any individual creativity, genius, responsibility, and any general or popular intellectual culture resulting from them.'
Former HUD Assistant Secretary (in the Bush Administration) Catherine Austin Fitts elaborates on 'the enormity of the plans to privatize the educational system and the potential billions of dollars in stock market value that could be shifted to software, telecommunications and technology companies.
She states: 'Federally mandated reforms, if successful, will permit corporations to assume profitable ownership and control of a much greater portion of the education system: everything from software and online systems to the construction and management of charters schools. If federal legislation mandates vouchers that carry an obligation to use federally regulated curriculum, corporate involvement will likely explode.
The 'Common Core' plan is engineered to give direct access to your children to large corporations and intelligence agencies. One thing I can assure you is that the history of giving direct, unsupervised access to young children by large corporations and intelligence agencies has never turned out well.'
So, the federal initiative--by any name--aims at goals beyond the cloak of 'better education'. It has as its driving force the corporate profit impetus conjoined with the cyber-induced 'shaping' power that can form the future perception of mankind through its children. 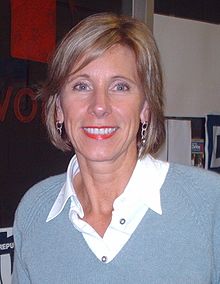 BILLIONAIRE BETSY
Mrs. DeVos has Deep State ties and her family activity resembles a Soviet-like influence peddling operation. Her Wikipedia page elaborates on her Bush clan connections: "DeVos raised more than $150,000 for the 2004 Bush re-election campaign, and hosted a Republican fundraiser at her home in October 2008 that was headlined by President George W. Bush. During the Bush Administration she spent two years as the finance chairman for the National Republican Senatorial Committee and worked closely with the Administration on "various projects."
How can Trump really be an 'Anti-establishment' guy with Devos on his team? Pffft. Even Infowars is casting doubt on this pro-Establishment Trump move: "Even having a Department of Education is a violation of the Constitution, but it appears that DeVos may be a betrayal of the parents and teachers who believed Trump would fight the establishment's Common Core."
Betsy addressed the Common Core issue on her website: 'Certainly. I am not a supporter--period. I do support high standards, strong accountability, and local control. When Governors such as John Engler, Mike Huckabee, and Mike Pence were driving the conversation on voluntary high standards driven by local voices, it all made sense."
She added, "Have organizations that I have been a part of supported Common Core? Of course. But that's not my position. Sometimes it's not just students who need to do their homework. However, along the way, it got turned into a federalized boondoggle."
Well, she certainly has the 'flip flop' schtick-speak required for D.C. swamp politicking--a degree of doublethink. Indeed, The Atlantic is reporting that her position is purposely ambivalent: 'Trump's transition team reportedly discussed the idea of "higher national standards" with DeVos. Trump's campaign pledge to repeal the Common Core standards isn't actually realistic because they are not a federal mandate. It's possible that DeVos and the administration might support similar standards while avoiding the politically toxic Common Core nomenclature."
CONCLUSION
In conclusion, Betsy Devos certainly appears to be a swamp creature. She's undoubtedly a scion of the Establishment, and yet many still believe that messianic Trump is somehow 'anti-Establishment'? Did everyone forget that Barry Obama presented himself as the 'anti-Establishment' candidate too and then kowtowed to all Establishment chicanery?
The DeVos pick isn't fooling me. Heavy.com also reported this: Lily Eskelsen GarcÃ­a, president of the National Education Association, told The Washington Post that the DeVos' have "consistently pushed a corporate agenda to privatize, de-professionalize and impose cookie-cutter solutions to public education."
So, how much murkier could the swamp mire be from which DeVos has emerged? Mother Jones investigated the breadth of Devos connections:
"Across four decades and two generations, the DeVos family has poured more than $200 million into the key institutions of the Christian right and the conservative movement--names like Koch and Falwell.
How extensive is the DeVos family's largesse? Above, we trace the family's many millions as they flow out of family foundations into the biggest-name think tanks and advocacy groups in American politics today.
And for good measure, we've included Erik Prince, the founder of the private-security company Blackwater, who is the brother of Dick DeVos' wife, Betsy. What a small world."
--
Related - Betsy DeVos: Everything You Need to Know
------------DeVos Fought Anti Reform Teacher's Unions
------------Common Core's Communist Core
----------- Trump's School Choice Program Could benefit Catholic Schools
------------------ A Communist View
First Comment by Glen:
"Anything is better than the system of Communist indoctrination now in place."
Au contraire mon frere, if you look at the two systems, I think you will find both are one and the same. Both will absolutely do away with critical thinking skills and be replaced with outcome based education.
For me there is only one moral, intellectual person who knows this subject inside out. She was actually part of the Reagan administration and fought tooth and nail to keep this "outcome based" education system from being enacted. Yes, you heard that right, the communist education system was brought in under one of our most "beloved conservatives"  Ronald Reagan. Her name is Charlotte Iserbyt. Her book is "The Deliberate Dumbing Down Of America."
Charlotte writes of her book:"The deliberate dumbing down of America is also a book for my children, grandchildren, and great-grandchildren. I want them to know that there were thousands of Americans who may not have died or been shot at in overseas wars, but were shot at in small-town "wars" at school board meetings, at state legislative hearings on education, and, most importantly, in the media. I want my progeny to know that whatever intellectual and spiritual freedoms to which they may still lay claim were fought for--are a result of--the courageous work of incredible people who dared to tell the truth against all odds. I want them to know that there will always be hope for freedom if they follow in these people's footsteps; if they cherish the concept of "free will"; if they believe that human beings are special, not animals, and that they have intellects, souls, and consciences. I want them to know that if the government schools are allowed to teach children K-12 using Pavlovian/Skinnerian animal training methods--which provide tangible rewards only for correct answers--there can be no freedom."
I urge all to find her book and read it, and to realize this is an on going battle and one we cannot afford to lose.

Comments for "What Does Betsy DeVos Mean for Common Core? "

There is no doubt that there is a false option to globalist marxism arising, the libertarian conservative billionaires. They pretend to be conservatives and even Christians, but have no problems with ecumenism, globalism or cultural marxism to control the masses, as long as they have complete freedom to exercise their crony style of capitalism. False alternatives provided by the elite for those who can't stomach Bill Gates new age leftism.

Amway is a scam and works like a cult. No honest or ethical person would ever profit from it. The Acton Institute was founded by a gay ecumenical priest, Robert Sirico, a former marxist pastor who was one of the first to marry gay couples decades ago. What a phoney conservative if there ever was one.

With the rising tide of right wing politics in the world, we should expect to see the elite start using these assets in a much more frequent way.

I'm not having kids. Because there's nowhere safe to raise them, they would get sent to the system and they would be depressed because that's what the system is for. I would only have kids if it wasn't the end times. Luke23:29 says there will be a time when it will be better not to have kids. That's now. If I had millions of dollars it would help, but in this society it's like passing your children thru the fire (to molech)
to bring them into the large concentration camp farm that is the system today. Life is detention with the oppression present today. When we all die and some of us go to heaven, that will be a place to have kids .