The Toxic Payload in Vaccines 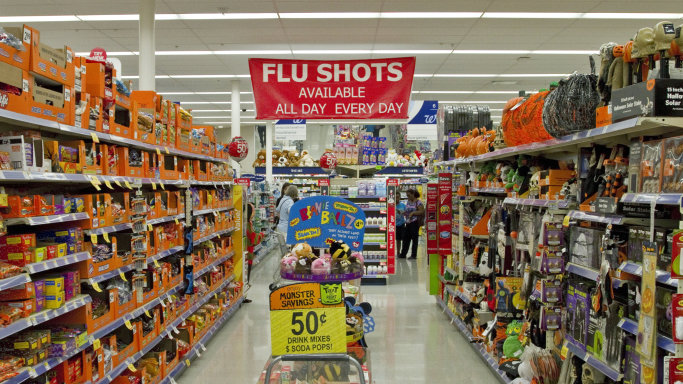 Hamish, a contributor, remarks on how we are encouraged to examine what is in our food but criminalized for rejecting the cocktail of toxins contained in vaccines.

Makow comment- A satanic cult seeks to control and exploit its members by making them sick and selling them a "cure." Vaccines fit this picture of Western society. Pharma sales were $1.3 trillion in 2015.

The Establishment media has reported that there is a growing 'anti-vax' movement--such an uptick in opposition to vaccines that the moniker 'anti-vaxxers' has entered the modern lexicon.

In Ontario, school boards have warned parents 'to update their kids' immunization records or face suspension'. The provincial legislature has produced legislation that 'would require anti-vax parents to take an 'education session'--essentially a re-education brainwash. The authoritarian posturing by the Establishment produces a societal chilling effect; people who either refuse vaccines or denounce them are ostracized by society--and this kind of systematic shunning is a worldwide trend.

In Australia, there is a 'vaccine crackdown' announcing an end to religious exemptions and decreeing that 'doctors will be given incentive payments so that parents stick to their children's vaccination schedule'. In poorer countries, organizations like The Bill and Melinda Gates Foundation (the world's largest private foundation with assets in the billions) distributes vaccines to millions. Adverse consequences are rarely headlined.

Major media outlets censure any exposÃ© exploring the possibility of vaccine damage and corrupt Establishment collusion--like the film Vaxxed (written and directed by Dr. Andrew Wakefield) that was pulled from the Tribeca Film Festival. Celebrity Hollywood stars are scorned--like Jim Carrey and Jenny McCarthy--for expressing concerns about vaccine safety. Even Donald Trump has stated that vaccines are 'not helpful' and in turn has been ridiculed by the corporate media. Of course, Dr. Oz (the darling of that same corporate media) shills for the Establishment and peddles vaccine injections for the public--rejecting any trepidation about the jabs.

So, what can we make of this controversy? It is a fact that vaccine pamphlet inserts state that their product can cause a litany of side effects, including autism--despite what CNN's Dr. Gupta says. I propose that when we look at vaccines we should use the same approach most people take when they decide what food and drink enters their body. After all, an injection enables many ingredients to enter the body and yet, for the most part, people take vaccines on blind faith. They have no idea what's in the shot--and the 'faithfully blind' usually don't even notice when later it's admitted a particular vaccine isn't effective. From this angle, I present some observations made by author Liam Scheff in his book Official Stories (2012):

WHAT IS IN A VACCINE?

The term 'vaccination' comes from the Latin word 'vacca'. We could call it cow-injection, to be true to history, because, and we're never really told this, but the vaccine that made it all famous--smallpox--came from the sores on the underbellies and legs of cows and horses. Pus and blood were scraped off, put on the ends of small, sharp pronged forks or lancets and jabbed into people's arms. Yes, 'vacca' means 'cow'. Does that surprise you? Did we really think that animal blood and pus was a good thing to put into our bodies? Vaccines are regarded as a nearly magical process, like a totem or a crucible, a station of the cross in the Western world; it has replaced baptism as a holy rite. Those who are opposed are mistrusted and feared, almost as witches; certainly as troubled heretics. But no one ever asks the question: what is in a vaccine?

Vaccines are not conjured at Hogwarts by honest wizards. Willy Wonka doesn't brew them in his chocolate factory. They are not magical and there is a reason, or many, why some people oppose them so strongly. Vaccines are toxic, by their very nature. The liquid in the syringe is filled with very small pieces of...well, a lot of things. These materials come from laboratory dishes where putative viruses are grown. But nothing biological can be grown, except in a 'medium' or substrate. That is, it takes living tissue to grow living microscopic entities. So, what tissues are vaccines grown in, or really, culled from? It's a living cell matrix: The first substrates were a variety of animal body parts, including spines and brains; rabbits were often used. Sometimes it was pus and blood from a sick animal. Then it was monkey kidneys and testicles; that's what the putative polio virus was grown in. Of course, monkey cells contain monkey proteins, viruses, bacteria, mycoplasmas, and toxins. It is not possible to filter out one microscopic particle from a sea of similarly-sized or smaller particles. These particles, proteins, viruses, and cellular debris have been and are being injected into millions of people, in the name of stopping polio--and every other disease for which there is a vaccine.

Hamster ovaries, washed sheep blood, dog kidney cells--and here's a favorite with the Christian crowd--aborted human fetal tissue; these are newer substrates. These cells are cultured, fed, stimulated and made to replicate. But you can't just siphon off fluid and cellular detritus from animal cells--you have to mix it with chemicals, to insure that it's stable, that it doesn't quite rot and that it truly inflames and agitates the immune system. In addition to the living tissue, vaccines have added to them a series of metals and preservatives, as well as chemical agents sent to aggravate and disturb your cells. Mercury is one of the longest-used metals in vaccines. It is a deadly neurotoxin, that on its own causes paralysis and death, as has been known since the time of the ancient Greeks, as recorded in Hippocrates. They also add aluminum, sucrose, MSG, phenol, aspartame and more. Formaldehyde has made it into countless batches. Formaldehyde is used to embalm dead people--to keep them from rotting. Squalene (the infamous adjuvant linked to Gulf War Illness) is a more recent offering. Its job is to agitate your muscles, blood vessels, cells and tissue into an inflamed state. Vaccine manufacturers actively seek this inflammatory response. They feel it helps their vaccine work. But it can also bring on real illness: pain, nausea, cramps, fainting, tremors, seizures, and a long list of neurological response. Sometimes vaccines cause death; sometimes instantly. Yes, that has happened too. Is that good for children? No, it's a toxic poison. But there it goes, into the blood.

It's increasingly popular to be aware of what food ingredients are entering our bodies--look at the backlash against GMOs or the chemical azodicarbonamide (removed from Subway restaurant's sandwich bread after it was exposed that the chemical is also used to manufacture yoga mats and shoe soles). But if you mention any reservations about vaccine ingredients to the average person then they'll likely give you a blank stare in response--that's the 'blind faith' programming kicking in.

Nevertheless, one thing is for certain: vaccine ingredients are toxic and inoculations actually spread viruses, so those concerns should be at least on par with our particular dietary-intake qualms. Perhaps, in addition to an apprehensive stance on vaccination regarding the ingredients used, we should also take heed of the messages from Establishment sources on their peculiar affinity for the actual viruses--especially for uses beyond the so-called public benefaction of vaccines.

For example, in the new Hollywood blockbuster 'Inferno', a virus is engineered that causes infertility for the purpose of depopulation--essentially, a Eugenics fantasy-scenario. Likewise certain royalty agrees that viruses which can depopulate are desirable--Prince Philip is quoted stating: 'In the event that I am reincarnated, I would like to return as a deadly virus, to contribute something to solving overpopulation'. Well, a side effect of some virus-loaded vaccines is sterility. So many agendas, so many toxins, all crammed into a piercing needle payload.

Related- Dr. Oz promotes vaccines but won't give them to his own children

The strangest thing about the whole vaccine controversy is how many people are brainwashed into thinking that unvaccinated people somehow pose a threat to the vaccinated masses.  I have seen several articles denouncing "anti-vaxxers" that quote parents who say they would never allow their children to play with unvaccinated kids and that kind of thing.  If they really believe that these vaccines work, then what are they worried about?  And if they aren't sure whether or not the vaccines work, then why do they still take them and give them to their kids when the pharmaceutical companies themselves will tell you that there are potential side effects (which they obviously try to downplay)?  All the diseases that vaccines are supposed to prevent are treatable and most are rare or nonexistent in the developed world, but last I heard there is no cure for autism and the number of cases is through the roof.  Pick your poison.

"Did previous vaccination against seasonal flu increase the risk of getting pH1N1 flu?...  ...This study confirmed that the seasonal vaccine provided protection against seasonal influenza, but found it to be associated with an increased risk of approximately 68% for pH1N1 disease."

Getting sick is just part of life, and the "cure" is often worse than the disease.

Comments for "The Toxic Payload in Vaccines "

My wife and I have two adult sons with sensory integration problems. I have an adult nephew who is autistic. My score on the AQ Test is more than 2 standard deviations above the mean. All of us received the vaccines that are typically given to babies and children. Problems like this didn't happen in my ancestors who grew up before the baby boom generation.

Our sons were diagnosed as children. Therapy helped their brain development, but was not completely successful. For therapy and various stimulant medications we spent enough to put both sons through a 4-year public university education. Most of the cost the insurance company wouldn't reimburse even though there never was a lapse in our coverage. Both sons are self supporting, although the youngest didn't fly the nest until he was 29 years old. The oldest can't function at work without medication.

I don't know whether one of the hidden motives of the vaccine pushers is to drain out the middle class financially, but vaccines certainly can have that effect.

As for the depopulation effect, my nephew never married and never will. My sons are heterosexual, intelligent and physically healthy. But they're wired so atypically that their odds of attracting wives are not good.

I hope your article will enlighten a few while they still can say no to vaccines for their children.

Jim Stone has some good stuff on Tainted Vaccines.

He reckons the Jews must be avoiding the vaccine wars against the goyim as they, as well as the Amish, enjoy the old autism rates (1:5000) rather than the current epidemic (up to 1:50).

It isn't avoiding 'electronic smoke' and EMF as the last time I checked the lights were still on in Broadway, NY, NY.

In Australia the policy is 'no jab' 'no pay', currently the withdrawal of family family supplementary welfare (approx. $1500 per annum per child). The linking to all welfare is IMO not far away.

It will get down to the mark of the beast decisions at this rate, and why are they so adamant about it? And do they care about Fukushima health hazards (to say the least)?