Why the Illuminati Downplay Child Molestation 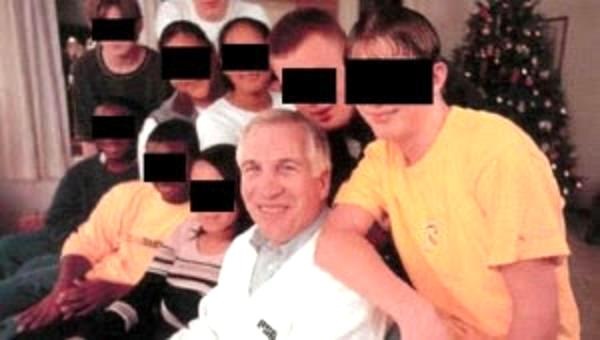 (Homosexual pedophile Jerry Sandusky)
Have you noticed that we are inundated with propaganda about male violence
against women but hear comparatively little about child molestation? Clearly
the Illuminati intend to make heterosexuality a pathology and homosexuality the
societal norm. We hear little about pedophilia because a child molester is ten to
20 times more likely to be a homosexual than a heterosexual. When a case is reported,
it is never associated with homosexuality. They do not even keep up-to-date stats
on pedophilia because most of our leaders are pedophiles and/or victims of pedophilia.
We have to rely on statistics that are two decades old, like those in Steve Baldwin's 20001 article below.
Steve Baldwin -- "The destructive impact homosexuality has upon Western Civilization is rarely discussed ...However, homosexuality is a sexual deviancy often accompanied by disorders that have dire consequences for our culture. ...It is time to acknowledge that [it] threatens the foundation of Western civilization - the nuclear family. An unmistakable manifestation of the attack on the family unit is the homosexual community's efforts to target children both for their own sexual pleasure and to enlarge the homosexual movement."
Child Molestation and the Homosexual Movement
Regent University Law Review 2001-2002
by Steve Baldwin
(Excerpt by henrymakow.com)
Scientific studies confirm a strong pedophilic predisposition among homosexuals. Family Research Institute founder and psychologist Paul Cameron, reviewing more than nineteen different academic reports and peer reviewed studies in a 1985 Psychological Reports article, found that homosexuals account for between 25% and 40% of all child molestation.
Sex researchers Freund, Heasman, Racansky, and Glancy, for example, in an 1984 Journal of Sex and Marital Therapy article, put the number at 36%. Erickson, Walbek, Sely, in a 1988 Archives of Sexual Behavior article, places it at 86% when the children being molested are male. 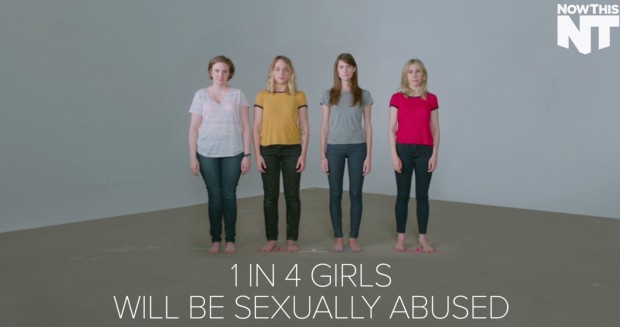 (l. Lena Dunham who admits to sexually molesting her sister as a child, gets on the heterophobic bandwagon.)

However, it should be noted that homosexuals account for only 2% of the population which statistically means that a child molester is ten to twenty times more likely to be homosexual than heterosexual. In other words, heterosexual molestations proportionally are a fraction compared to homosexual molestations. More recent studies confirm this statistic. In 2000, the Archives of Sexual Behavior published an article by seven sex researchers concluding that "around 25-40% of men attracted to children prefer boys. Thus the rate of homosexual attraction is 6-20 times higher among pedophiles.

Sexual violence expert and professor of psychiatry Eugene Abel, in a 1987 study published by the Journal of Interpersonal Violence, concluded

that homosexuals sexually molest young boys with an incidence that is five times greater than the molestation of girls.

In a 1992 study published in the Journal of Sex and Marital Therapy, sex researchers K. Freud and R. I. Watson found that homosexual males are three times more likely than straight men to engage in pedophilia and that the average pedophile victimizes between 20 and 150 boys before being arrested...

This type of behavior, however, is considered normal in psychiatric circles due to the influence of homosexual psychiatrists within the American Psychological Association. It is the homosexual caucus within that body that pushed to rewrite the diagnostic criteria for pedophilia. The new definition defines sex with children as a psychological disorder only if it causes "clinically significant distress" for the molester! Under that definition, most molesters are perfectly normal people!

The American Psychological Association appears to have similar sympathies when it published a sloppy and error-filled article in its Psychological Bulletin in July 1998, arguing that there is no research documenting that sexual child abuse is harmful to children and that "a

willing encounter with positive reactions would be labeled simply adult- child sex" instead of using terms such as child abuse and victim. There was no outcry from the homosexual community. Indeed, they either remained silent or publicly defended the article. One of the nation's most prominent homosexual journalists, Andrew Sullivan, attacked critics of the study in the New York Times. In the National Journal, gay journalist Jonathan Rauch strongly defended the study and argued that child molestation should be called "adult-adolescent sex."

The Center of Disease Control (CDC) recently reported that as of the year 2000, there are now 31,293 AIDS cases in the 13-24-age category. The HIVIAIDs SurveillanceReports maintained by the CDC demonstrate that for the last few years around half of the age group 13- 24 HIV victims were infected with the disease as a result of sex with adult men.59 However, one must bear in mind that due to the incubation period of the HIV/AIDS disease, many of these boys and young men were infected as long as ten years previous to the reporting of their cases. This translates into roughly 15,000 boys that have been infected by adult men since the CDC started to compile this information. This is an epidemic no one seems to want to talk about.

Indeed, the response instead has been an escalating effort by the homosexual community to compromise every major youth group possible and to inundate our public schools with pro-homosexual curricula, counselling, and social activities. The YMCA, Girl Scouts, and the Big Brothers, despite also being plagued by molestation incidents, have all capitulated to homosexual pressure campaigns. Indeed, Girl Scout leaders writing in the 1997 book, On My Honor: Lesbians Reflect on their Scouting Experience, reveal that the Girl Scouts are inundated with lesbians-a third of its professional staff is lesbian-and they have even initiated a lesbian mentoring program!

The Boy Scouts now stand alone among America's major youth groups in resisting the homosexual agenda - and that explains why they are under such ferocious legal, legislative, and cultural attack. [They capitulated in 2015.]

Moreover, the liberal media omits any mention of a person's homosexuality in covering molestation stories. This is reinforced by pressure from homosexual groups. The Gay & Lesbian Alliance Against Defamation (GLADD) disseminated a "media guide" to reporters nationwide in which they urge: A criminal's . . . sexual orientation is not always obvious (or relevant) based simply on the circumstances of a crime ....[Als a rule avoid labeling an activity or emotion as "homosexual" unless you would call the same activity "heterosexual" or "straight" if engaged in by someone of another sexual orientation.

The homosexual community knows that the capture of all major youth groups is absolutely necessary to the expansion of its movement. They know what most social scientists and sex researchers know but refuse to talk about: homosexually-molested children are likely to become homosexual. After all, one of the most common characteristics of homosexual molesters is the fact that they were molested themselves during boyhood. An article published by the American Medical Association reported that, "Abused adolescents, particularly those victimized by males, were up to 7 times more likely to self-identity as gay or bisexual than peers who had not been abused."

It is high time that America's elected officials, health authorities, education leaders, and law enforcement officials act to not only tell the harsh truth-the homosexual community has targeted America's youth-but act now to counter this horrible trend. Failure to do so will have disastrous consequences for both our culture and for the health of our children.

Thanks to Katherine for the tip!

Pedophilia is now being sold as a conservative proposition.  Here's how it works:  as baby boomers (like me) die off and Millennials come into their prime, many are confused and frustrated with the post liberal revolutions of the 1960's - i.e. the "Left", represented by dinosaurs like Hillary 'cut throat' Clinton. 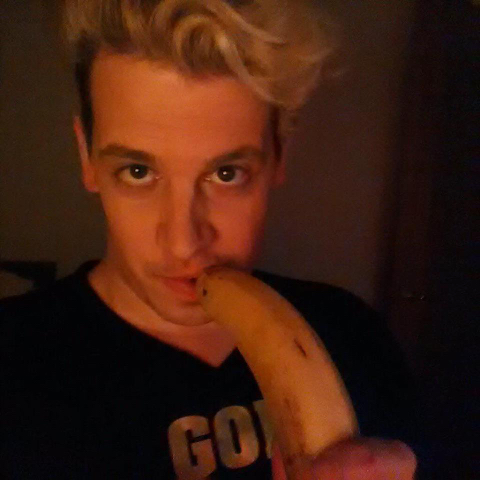 To fill this need, a couple of years ago hipsters like Milo Yiannopoulos showed up in their Youtube and Twitter feeds, calling themselves conservatives.  They say some true things and purport an alternative - hence "the ALT Right".

Milo himself has said that "my fan base is disgruntled Liberals".   That's the 'Alt Right' target in a nutshell.

Baby boomers may be mystified as to how so many Millennial males see no red flag when their 'leaders' flaunt their homosexuality.  It took me months to figure it out:  Millennials are the first generation of males raised mostly by 'single moms' who left them in day care.  Many had to relate to a parade of their mom's sex partners for their male role models instead of fathers.

I can't think of a more opportune hunting ground for predatory eubophilia*.

Milo Yiannopoulos said "in the homosexual world particularly, those relationships between younger boys and older men are coming of age relationships.  Those older men have helped those young boys discover who they are and give them security, and safety, and uh.."

The sleazy interviewer butted in sarcastically, "sounds like Catholic priest molestation to me".  Milo replied, "You know what?  I thank god for Father Michael.   I wouldn't give nearly such good head if it hadn't been for him".

To hear Milo say this himself, listen here from min 25

* The UN is promoting pedophilia and eubophilia

Comments for "Why the Illuminati Downplay Child Molestation"

Having done therapy with Adults that were molested as children, it's an outright lie that molestation does not hurt them. 30, 40 or even 50 years later, the intense emotional reactions to childhood molestation are more than just tears. They can become physically ill with nausea and vomiting. One man suffered his entire adult life with Crohn's disease because of one single molestation event by a friend's uncle.

These intense emotions and reactions can be completely overcome, but the laws of the land sometimes do more harm than good. When the police are brought in, the child and his family are subject to unpleasant interrogations and nasty defence attorneys. I've done several cases where the police caused more pain that the actual molestation event(s).

The law also requires professionals working with children to report suspected cases of molestation and many cases go untreated because of the fear of police involvement, as one client put it, "the police came into our home swinging sledgehammers to kill some flies". The family's dynamic was ruined and never recovered.

Pedophiles are sick people and according to stats, only about 6% that have had therapy will reoffend; the lowest of all rates of recidivism for all crime categories. This is quite remarkable since the average recidivism for the average prisoner is nearly 80%. (30% if they have received adequate therapy) I have not worked with these re-offenders, but I'd speculate that this 6% may be psychopaths. They are a danger to society and should be isolated for our general safety.

We are going the way of ancient Sodom and Gomorrah, but in reality we probably surpassed their record long ago. And if there is a God of justice, we will probably suffer the same fate.

Dr. Makow - Very recently the State of Washington has announced that starting in 2017 mandatory instruction in the normality of transgenders will begin in kindergarden. There will be NO parental " opt-out " allowed. This is an official fulfillment of the title of my article at Fight-the-Power.org - They are going to start recruiting your child in kindergarden.