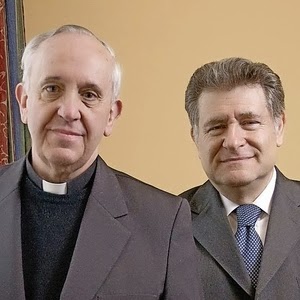 The great Kahal of New York relentlessly develops its strategy and executes its policies in conjunction with Tel Aviv. The other great Kahal in the Americas operates in Argentina, which outside Israel, harbors the second largest Jewish population in the world, estimated at two million (rather than the official version of 300,000.)

In a groundbreaking 10-page article in the current issue of Culture Wars, Thomas Brennan explains why Argentina is so important to the Jews, and how its was inevitable that the Catholic Archbishop, now installed in Rome, should become their chore goy.

As in the United states, the media in Argentina is thoroughly controlled by Jewish interests... This means the arts, movies, theatre, pornography and the rock music industry  are all firmly in Jewish hands...

Another major cultural influence cultural influence not to be overlooked is the gnostic Jewish secularizing influence and manipulation of society through the exercise of psychoanalysis. It is said Buenos Aires has the highest rate of psychoanalysts per capita in the world. This pathetic situation, which includes the unnatural empowerment of women and the systematic imposition of the gender ideology, is part of the on-going gramscian cultural subversion which has been a permanent policy for the past 30 years.

In a traditionally Catholic country like Argentina, Jews have managed to influence and co-opt the Catholic hierarchy of the Church by promoting a strategy of blasphemous ecumenical encounters under the auspices of Cardinal Jorge Mario Bergoglio, now Pope Francis, when he was Archbishop of Buenos Aires and President of the Argentine Conference of Catholic Bishops, a policy which he continues now in Rome.

Pope Francis's chief accomplice in this campaign of subversion is Rabbi Abraham Skorka, who is a strong supporter of homosexual marriage and was the unofficial master of ceremony in Israel when Pope Francis laid a wreath at the tomb of Theodore Herzl during his visit in 2014... 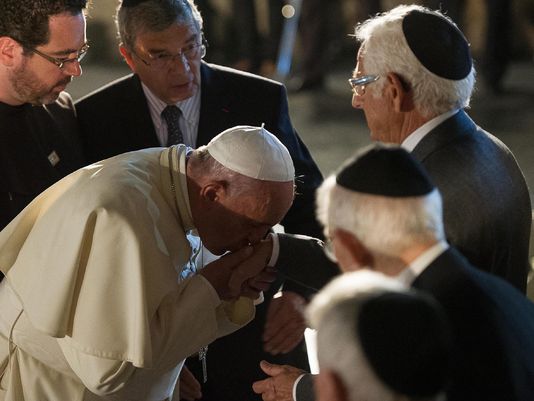 In 2010, Argentina was the first country in Iberoamerica to legalize homosexual marriage. This iniquitous law against the Moral Order, as well as the pro-abortion law on Reproductive Health, was passed by Congress with Archbishop Bergoglio's tacit consent and characteristic ambiguity (covered up with his letter to the Carmelite nuns). Cardinal Jorge Mario Bergoglio was not just a Jesuit in the bad sense given to that honourable word by the enemies of the church. His "forma mentis" was quintessentially duplicitous, involving double standards and plain Pharisaism when it came to deal with the moral order and Catholic matters ( he never allowed Traditional Mass in his diocese even after Benedict XVI's motu Proprio Summorum Ponticum of 2007. And he persecuted and isolated both priests and laity committed to traditional Moral Catholic Doctrine and Liturgy. )

Concerning ecumenism [Bergoglio] did not simply follow the post Vatican II Nostra Aetate script. The prophetic Catholic book La Iglesia Traicionada (Caponnetto, Antonio. Santiago Apostol. Bella Vista. 2010), based on first-hand, deep, direct knowledge of Cardinal Bergoglio, showed how he was the living personification of the Judeo-Christian heresy; how he built, embodied, and led the unfaithful modernist structures in the church in Argentina. 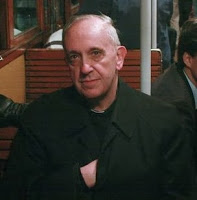 Furthermore, Bergoglio was an active part of the Zionist institutional structures. For a long time, he was involved with the multinational Zionist Raoul Wallenberg Foundation, with branches in Israel, Berlin, and headquarters in New York. In Argentina it is represented by the AsociacioÌn Casa de Israel en Tierra Santa, with conspicuous Argentine Jewish members of the Gramscian left like Francisco Delich or Adolfo Gass, professional blasphemers like Marcos Aguinis, judeo-masonic "cipayos" like Carlos EscudeÌ or grotesque agents of moral social corruption like Alejandro Romay. On March 30, 2004, Cardinal Bergoglio and the Wallenberg Foundation gave Romay great honors at the Metropolitan Cathedral of Buenos Aires while participating in a special pluri-religious ceremony and liturgy.

Many other ecumenic encounters followed year after year to commemorate the Shoah and Kristallnacht at the Cathedral of Buenos Aires. On November 9, 2009 Begoglio allowed Rabbi Alejandro Avruj, a confessed sodomite, and militant advocate of homosexual marriage to give a conference at the historic Convent of Santa Catalina, accompanied by Rafael Braun the modernist influential priest consultant for the liberal-catholic journal Criterio, whose editor for many years was Cardinal Jorge MejiÌa, another protector of sodomite priests. 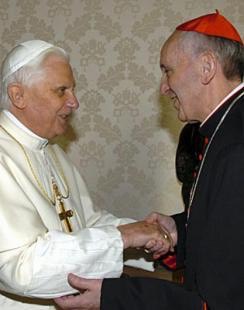 (Benedict and Bergoglio in Masonic grip)

Interestingly, when John Paul II visited Auschwitz, the rabbi who accompanied him, before a question about the Pope's successor whom he deemed more in keeping with his expectations, discarded all candidates but Cardinal Bergoglio, who was his choice. Bergoglio knew about this. The timely publication of the book El Jesuita ( The Jesuit Conversations with Cardinal Jorge Bergoglio, S.J. Buenos Aires. Vergara 2010) by Sergio Rubin, an influential Zionist journalist is another proof of Bergoglio's scheming for the highest post at the Holy See.

As Great Chancellor of the rich Pontifical Catholic University Santa MariÌa de los Buenos Aires, Cardinal Bergoglio gave an honorary degree to his alter ego, Rabbi Abraham Skorka on October 11th 2012. On this occasion Skorka made an eulogy of Bergoglio and of Cardinal Kasper, and said before a large audience of professors and clergy that the New Testament had to be revised concerning the question of the Pharisees; that the roots of Nazism, which led to the " Holocaust" were in the Catholic Church' s teaching ; finally he ended his provocative blasphemous speech by saying: "after all, we are all expecting the Messiah." Shamelessly, most of the public, Cardinal Bergoglio included, applauded the affront (https://www. gloria.tv/?media=357609 ). 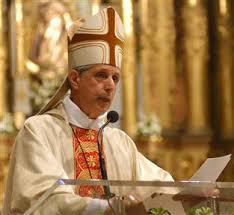 The new Archbishop of Buenos Aires, Mario Aurelio Poli, (left) Bergoglio/Skorka's choice for succession in the Archbishopric, who was made cardinal by Pope Francis, has followed in Bergoglio's footsteps. In November 2014 at a meeting specially organized at the Cathedral of Buenos Aires to commemorate Kristallnacht, after donning a kippah, Poli said that he was proud of his Jewish surname. Other Argentinian prelates have followed Cardinal Bergoglio's example in this regard. Last Christmas Argentine Catholics were treated to a performance of "Januka" and "Silent Night" performed by Rabbi Marcelo Polako and Bishop Pedro Torres Aliaga, who sang and danced with great joy together, arm in arm. As some indication of the real purpose of this degrading spectacle, the Rabbi condescendingly referred to the bishop insultingly as a "goy," during the performance ( https://www.youtube. com/watch?v=PI6J0jSwF44 ).

In spite of (or perhaps because of ) Catholic/Jewish dialogue, the Jewish subversion of Argentine culture continues unabated. The abortion lobby in Argentina is funded by Jewish "philanthropists" like George Soros and Eduardo Elsztain. The new Macri government has appointed Fabiana TunÌƒez as head of the National Council for Women. Ms TunÌƒez, a militant advocate of abortion-on-demand is the founder of the NGO Casa del Encuentro, a pro-abortion NGO well -funded by the Global Fund for Women, the United Nations Population Fund, and IRSA/ Alto Palermo, the conglomerate owned by Eduardo Sergio Elsztain, the "pious" Jewish Argentine former partner of George Soros. The new Macri government has actively participated in the subversion of Argentine culture....

Order this excellent issue here  as a pdf for $4

Thanks to Alexandre for the tip!

Every time Bergoglio speaks, even Novus Ordo Catholics scratch their heads. Where ever his theology comes from, it's not remotely Catholic - much less Christian.  It's as if he's making it up as he goes along.  His real passion is actually pushing exactly the same Western Globalist agendas as politicians like Merkel, Obama, and Cameron.

Hm.  I hadn't thought about it, but now that you mention it, that's exactly the kind of thing certain rabbis would say.   It's just more evidence that the Catholic Church no longer exists. Bergoglio is a fraud, presiding over another Disneyland theme park just as rife with mind control and pedophile issues wrapped up in a simulacrum.

'Pope' Francis says ISIS is just like Jesus sending out his disciples.

atherine emmerich described a future scene she saw where the false prophet was gathered with a few men (the nine cardinals?), and where they created new teachings for this new false pagan church. So the first new false teaching was 'live and let live', exactly what Bergoglio wrote on top of his list of ten things for a happy life. This was done in the summer of 2013. As you can see, this prophecy for the last days was already fulfilled. Time is really short now...and 'doom and gloom' are for those who have been defying God, who have ignored HIm or simply keep themselves silent, afraid of being labelled, rejected or called names.

is Pope Francis a Crypto-Jew Zealot as well?
Remember the De Medici's put their own
Jewish Pope on the throne 600 years ago.
And Argentina is a haven for Zio-Jewry...
how many Vatican Secrets are
being kept in that basement?

Absolutely Dr Henry, bergoglio is a gnosticist, always speaks with double talking, semantic deception, using of course christian terminology to fool people.....not many people have decoded this deception, which for me is the most cunning and deceptive (but so obvious for those who have studied the cabala, it's development into gnosticism and how it is used now in christian churches to fool people...
Bergoglio is the biblical false prophet, who is dragging into apostasy as many catholics (and others)possible..plus he is working to building an universdal church, by having endless meeting with leaders of others faiths a nd creeds. Simon Peres in 2013 asked him if he wanted to be the symbolic leader of this universal religion..we don't know what the answer was !!!

The true pope is benedict XVI, which never left the vatican...there are many prophecies stating that in some point catholics would have to choose betwen a false pope and a true one, that we would have two popes at the same time (st catherinne emmerich for example)...
Pius X 1905 vision of a future pope..Pius saw this man crying and praying alone in the vatican and that he wouod be martyred in the end of tribulations...Pius said that this future pope would share the same name as his - Giuseppe/Joseph...so it is benedict XVI !!!

But there are more prophecies a nd all of them do match with the reality we are witnessing now..

Jews infiltrate everything and everywhere. Still doesn't mean Catholic Church isn't the only true church of Jesus. Jews will work to destroy from within as they do all things, but Catholic Church will always be protected by God, Virgin Mary, St. Michael. Jews cannot win over God and they never will no matter how hard they try. They will burn in hell with their king Satan for their crimes against humanity and creation.

Quite interesting article, but had a darn time reading it because something interferes by taking control of your computer so you can't scroll down. It keeps moving the reading so you can't make heads or tails of the article. It's definitely on purpose. I've had it happen on other sites that give this type of info, but it doesn't happen on any normal sites.