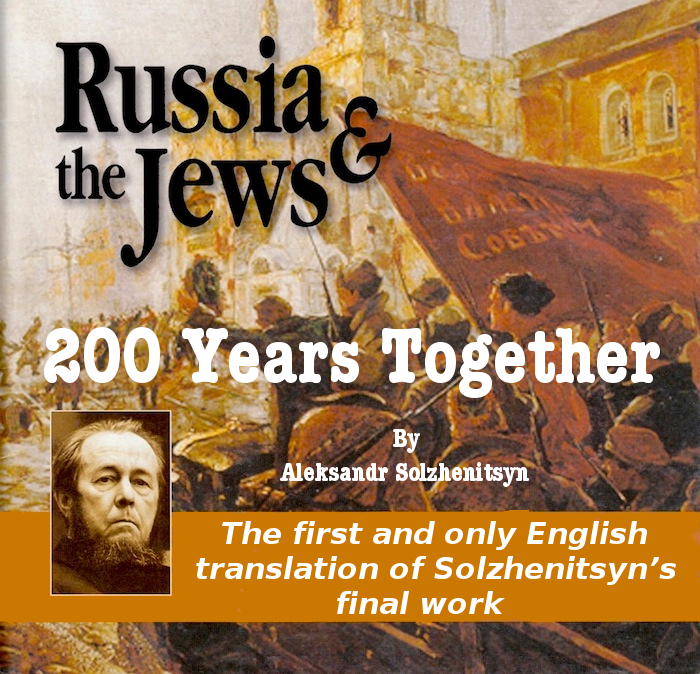 (Partial English translation is available for download here. Here is another version.)
In his last book, suppressed in the West, Solzhenitsyn presents the history of the Jews in the Russian Empire and the Soviet Union ( 1795-1995), and in particular their participation in the revolutionary movement and destruction of Christian Russia during the Bolshevik Revolution and the Soviet state. Polish historian Bob Korecky says this book should be read by everybody who wants to understand history of Eastern Europe.
When in 1550 the Polish King Sigismund August desired to give Jews free entry into Russia, Tsar Ivan the Terrible rebuffed him with these words: "We absolutely do not permit the entry of the Jew into my lands, because we do not wish to see evil in our lands, but rather may God grant that the people in my land may have rest from that irritation. And you, our brother, should not write us on account of the Jews again, for they had alienated the Russians from Christianity, brought poisonous alcoholic liquids into our lands and done much evil to our lands."
by Bob Kordecky
(abridged by henrymakow.com)
In the current conflict between Russia and Ukraine both sides accuse each other of anti-Semitism, and  paradoxically, it happens at a time when oligarchs of Jewish origin play a huge role in both countries.
The presence of anti-Semitic sentiments in both countries is easy to understand, given the history of this part of Europe.  The great Russian writer and thinker, Soviet dissident Alexander Solzhenitsyn  wrote s book  entitled "200 Years Together," describing the disastrous impact of Jews on the history of Russia and Ukraine.  Not coincidentally, this book was almost entirely concealed in the West, in contrast to other works by the same author like The Gulag Archipelago, which brought him fame and a Nobel prize. This is because his book violated certain taboos and dogmas in the West.
In the second part of his work, Solzhenitsyn described the Jewish domination of the Russian Communist Party, American support for the Bolshevik Revolution, the dominance of Jews at all levels of government of Bolshevik Russia, the extermination of the Russian national elite and Orthodox Church,  Jewish communists' responsibility for the communism crimes, Soviet  purges, Jewish nepotism in  the Soviet government administration.
SUPPRESSION
Although the Bolshevik Jews were atheists and hostile to all religions, they felt a special hatred  towards Christianity, seeded in them in childhood. Most of them  came from a families of orthodox Jews. Christian priests sent to the gulag were treated with an exceptionally perverse cruelty. Solzhenitsyn described a scene in which the imprisoned priests were driven naked in the biting cold and drenched in water. Has anyone heard of a similar procedure applied to the rabbis? 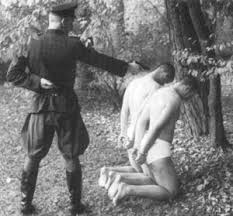 Under the Bolshevik rule, Christian churches in Russia become true " churches of martyrdom ".According to official data provided by Alexander Yakovlev, in the period from 1917 to 1985 about 200,000 clergy of various denominations were murdered, and 300,000 were interned. Only in 1918-1939 Bolsheviks killed more than 130 Orthodox bishops. They also murdered hundreds thousands of the faithful.
Communists wanted to pluck out Christianity by the roots from the Russian soul completely. The fact that Christianity survived in Russia can be considered almost as a kind of miracle. Unfortunately, the modern Catholic Church hierarchy, ignoring that sad history lesson, adopted penitential pose beating their breasts for "sins against Jews".  This seems to be the best proof of the deepening process of  "Judaization of the Catholic Church."
POLISH JEWISH COLABORATION
For  Poles, the first part of the book describes the historical role of Poland in a particularly irresponsible, even recklessly favorable treatment of the Jews. Where Jews were expelled from the most European countries, Polish kings and gentry opened the gates of the country, giving them special privileges. Poland was sometimes called a haven for Jews (paradisus Judaeorum) and even Judeo-Polonia. As a result of such policy, at the end of the XVIII century, the Jewish ethnic group in Poland was about 10% of the population of the country and was the largest in Europe.
Greedy Polish Jews took an active part in the Polish Drang nach Osten, which ended badly for Poland. After signing in 1569 year the Union of Lublin territories of the the former Kiev Rus were incorporated into Poland. 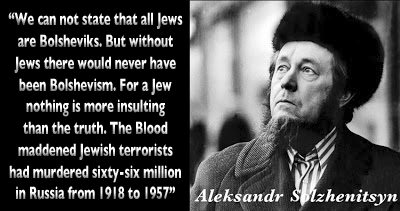 Solzhenitsyn writes:
"The main population of this land were Orthodox peasantry, long with significant freedom and freedom from taxes. Now began an intensive colonization of Ukraine by the Polish nobility with the participation of Jews. Cossacks were tied to the land and were required to serfdom and contributions ... Catholic landowners burdened Orthodox peasants with various taxes and duties, and Jews played a special role in this process. Jews bought up the right for production and sale of vodka and the right to obtain an activity in other sectors of the economy. Jew-inn-keeper, took the place of Polish landlord, in fact he received the power over the peasant, who had previously belonged to the landowner. The Jew-inn-keeper tried to pull out of a peasant greatest possible profit. In this case, peasant hatred headed for the Catholic lord and his partner a Jew administrator.
So,  when in 1648, a terrible Cossacks uprising started  under the leadership of Khmelnitsky, Jews, along with the Polish landowners were victims. Cossacks killed a few hundred thousands of Jews and Polish citizens with unimaginable cruelty. ..
It is horrifying how deeply the Polish-Jewish oppression and grievances have stuck in the minds of the Ukrainian society when a few centuries later during WWII hatred of "Polish lords" was the reason of terrible crimes committed by the Ukrainian nationalists on the Polish population in so called Volhynia slaughter. This time, however, their main victims were not Polish nobility or the Jews, but innocent Polish peasants - settlers in Ukraine. 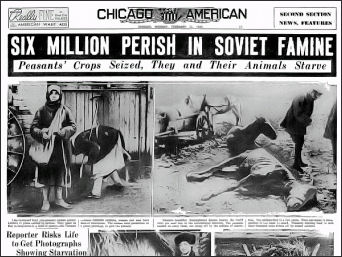 On the other hand, in the 1930s, Bolshevik Jews starved to death millions of Ukrainian Orthodox peasants. Ukrainian lands became a huge death camp. Entire villages extinguished and mass graves covered the local landscape. Almost 25% of population disappeared. Sometimes, those crimes are attributed to Russian nationalism and chauvinism in the fight against Ukrainian nationalism. Therefore, this is a necessary reminder of the historical roots of hatred between Russians, Ukrainians, Poles and Jews.
bkordecky8@gmail.com
Related-
http://www.theguardian.com/world/2003/jan/25/russia.books
http://mailstar.net/Solzhenitsyn-200YT.pdf
http://books.google.com/books/about/A_Century_of_Violence_in_Soviet_Russia.html?id=ChRk43tVxTwC
http://www.youtube.com/watch?v=uEftJc31ZB4
http://www.liveleak.com/view?i=c4f_1402261600
http://en.wikipedia.org/wiki/Massacres_of_Poles_in_Volhynia_and_Eastern_Galicia
http://www.holodomoreducation.org/index.php/id/180
http://www.youtube.com/watch?v=24iTY8xQtEM

Comments for "Jewish Imperialism is Backdrop to Russian History "

Thank you for posting the link to '200 Years Together'. Unfortunately, a complete English translation of the book must be made out of 'Unobtainium' because I've never found one. There are no less than ten whole chapters missing from the .pdf copy circulating online. Conspicuously, the entire crucial epoch spanning the 1880's up to the ejection of the Trotskites is a black hole.

The word went out in the publishing world that the book is a 'third rail' so professional translators won't touch it. Eventually the chapters in English translation were posted on a Russian website for reading online, but by the time I found out about it the owner had already posted this:

"Important news: finally, there is a real possibility that the book will be published. I decided to halt the project and remove the links to the translated material to avoid harming this wonderful development. I believe that it became possible in part because of this project. I deeply thank all our donors, without whom this project would not be possible, our editors and translators. Please stay in touch and check this website regularly for updates."

Well, fat chance. I think this book is going to remain unobtainable for a while.

True, it is very sad that the ongoing talmudic attempt, set up forty three years after Christ's crucifixion("The Mysterious Force"),with its added freemasonry in 1717, all with the sole purpose being to infiltrate or otherwise to destroy Christ's own Church, has almost totally converted that Church into just one more protestant sect, which now also calls today's talmudists as well as all non talmudic Jews, "God's chosen people," the same "mistake" protestants have always made as part of their dogmas.

But there are still Christ's words of assurance in Peter's answer to his question to his apostles: "Whom do you say that I am?"

(All verse from the Middle English Rheims New Testament but using modern English.)

It was Peter who replied: "You are Christ, the son of the living God."

Then Christ addressed him: "Blessed are you, Simon bar-Jona because flesh and blood has not revealed it to you, but my father which is in heaven. And I say to you, that you are Peter, and upon this Rock will I build my Church, and the gates of hell shall not prevail against it. And I will give to you the keys of the kingdom of heaven. And whatsoever you shall bind upon earth, it shall be bound also in the heavens; and whatsoever you shall loose in earth it shall be loosed also in the heavens."

>From that time Jesus began to show His disciples, that he must go to Jerusalem, and suffer many things . . .

This was the beginning of Christ setting up his Church before his soon to come crucifixion. It takes real obstinance for anyone calling himself a Christian to deny that. It makes it impossible for an honest man to deny the seat of the Pope as the seat of Christ's Church.

Interestingly, there are already voices in the Church hierarchy who seem to have had enough of this present usurper.

We live in interesting times. Christian martyrdom, growing daily world-wide, may very well soon come to the Western Hemisphere. Already in the "free" United States, Christians are being jailed for refusing to defile Christian marriage by catering to God condemned faggots and dykes. Plus murder of the unborn, probably the very worst possible sin, is now a commonplace in the whole west, accepted even by millions of Vatican II"Catholics." Not to mention long accepted contraception, another type of child destruction unacceptable to God.

Yet none of this can counter Christ's own statements. Christians will likely die massively again but His Church will not.

The historic relationship between the Modern Day Church and World Jewry is really an enigma within itself.
How and why does the Church, yesterday and today, continually support the very Talmudic Synagogue that seeks to destroy it?

The answer is buried in the COWARDICE and IGNORANCE of it's Church leaders. Better to be a healthy well fed hypocrite living in peace and personal prosperity than being a Christian Martyr living in poverty, humiliation, and suffering for the love of Christ.

Better to war against the nations, even the Christian ones, than to have to confront the Jews who demand these very wars and revolutions against them.

The Modern Day Apostate Church has become has become an accessory and enabler to World Order Zionism and it's Talmudic Synagogue.