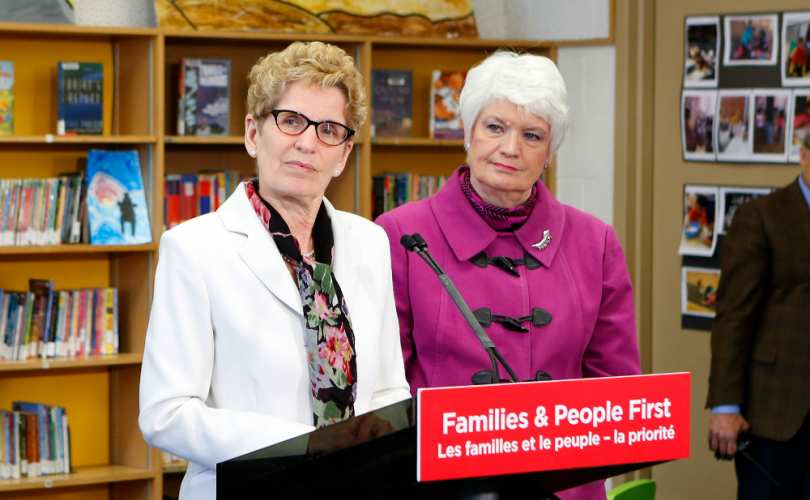 (left, Wynne with Education Minister Liz Sandals)
In a meeting, Ontario Premier
Kathleen Wynne couldn't respond
to objections parents had to
the state sexualizing their children.
From Reality, July 2015
The Real Women of Canada
A delegation of family, religious and ethnic groups met Ontario Premier Kathleen Wynne at Queen's Park on 29 April 2015 for 90 minutes to discuss her controversial sex education curriculum.
Gwen Landolt, National Vice President of REAL Women of Canada, was a part of the delegation and one of its speakers. The Premier seemed at a loss to come up with responses to our questions and statements about the curriculum. Ms Wynne appears to exist in her own bubble, where no one has raised these questions with her before.
For Example:
1. Ms Wynne informed us that, according a recent study, approximately 20% of children are engaged in sexual activity. We reasonably stated that this meant that 80% of children are not involved with sexual activity, presumably because of their families' values, ethnic and religious beliefs. We then politely inquired, what then, was the purpose of all students taking this course? Was it so that all children can learn how to become sexually active? Ms Wynne was unable to make a response.

2.When one of the members of the delegation asked why very young children (grade 3) were being introduced to homosexuality and same-sex marriage, Ms Wynne stated that some children were living in same-sex families and they should not be excluded in discussions about families. When the delegation brought to Ms Wynne's attention that, in fact, less than 1% of children are living in same- sex families, so what about the other 99% of children? Ms Wynne was startled by this statistic, but had no response.
3. We raised our concern about teaching consent for sexual activity to, as early as, grade one (six year olds). We noted that under the Criminal Code consent to sexual activity is restricted to those 16 years old and over. We also referred Ms Wynne to section 21 of the Code which provides that it is an offense to: aid, abet or encourage an individual to enter an unlawful act. Would this consent provision then not set up teachers and school boards for future legal problems? Ms Wynne appeared to be unaware of these provisions in the Criminal Code and asked her assistant to make a note of them. Rather late in the game to do so. 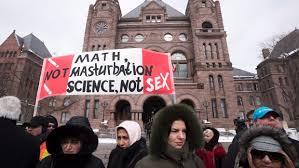 4.When the delegation asked why the Premier refused to withhold the curriculum so that the parents could be consulted, her response was that there had been five years of consultation with the experts, and as a result, there could be no further delay in implementing the program.
The delegation's response was that it didn't matter if there had been 10 years of consultation, if the curriculum still wasn't right, it shouldn't be implemented. There was no response to this.
Ms Wynne does not grasp the fact that sex education establishes social and moral norms, and her curriculum seeks to change the current norms. It attempts to adopt values diverging from the wide spectrum of religious, cultural and social diversity in Ontario. In short, why is the province trying to set social and moral norms, rather than the parents, who properly have this responsibility?
It is significant that,in June,the Ontario Liberal government launched a $1.8 million campaign to "inform" people about the importance of the revised sex education curriculum.The ad campaign, however, is a farce since it doesn't even mention the sex education component, but merely promotes the program as being an update on health issues. It is a deceitful campaign meant to mislead the public.
If anyone is misinformed on the sex education curriculum, it seems to be Premier Kathleen Wynne.
--
First Comment from Dan:
I'm going to address two statements in the article that tend to mitigate Premier Wynne's culpability in what amounts to State sponsored child abuse.
"Ms Wynne does not grasp the fact that sex education establishes social and moral norms, and her curriculum seeks to change the current norms."
Oh no, she knows very well, that's the role of education.  That's why she will not bend - she cannot.  Getting deviant sex programming hard-wired to school curriculum is a "must be" and it's her personal life mission.  It her motive for becoming Premier in the first place.
"Lesbian Premier Dumbfounded by Sex Ed Objections."
I'll grant you that she may think that the mothers who object to queering their children are 'unenlightened' like she is, but she's known there would be protest all along.  Her job is to use all the power and guile at her disposal to ramrod it through over objections.  Her pretence of being dumbfounded is an act, as if to demonstrate, "you heterosexual women are the crazy ones, why, the experts have decreed it's perfectly normal'.
I was born in 1955, before school boards and mayors subjected children to 'sex education'.  It was taken for granted that children are immature. (that's an understatement!)
The rationale that "children are sexual beings" would have been answered with "So what?"  Children might wander into busy traffic chasing a pretty ball, too.  It doesn't matter if Kinsey 'proved' adults can masturbate children to climax.  It only belies the reasoning of pedophiles.
Everyone's been a child so everyone always knew throughout history that some children are sexually 'precocious'.  All it takes is an incident from which the child learns that touching himself "there" causes a pleasurable sensation.   That's why up until the Kinsey era mothers told children to keep their hands 'above the covers' when they tucked them in at night.  Doctors advised that masturbation can lead to insanity.   That's been ridiculed by comedians and even doctors for 60 years but it's true.   Masturbation addiction in children warps their emotional development.   It alters their sleep cycle.  It promotes addiction to fantasy.  It develops the habit of objectifying others.   In short it produces a Narcissistic savage with great impediments to reason.
It IS the root cause of arrested development.

Kathleen Wynne and Liz Sandals both look like a couple of really bad villains from series one of Star Trek.

Will someone please explain how it is that parents, (particularly readers of this web site) believe they can entrust their vulnerable children to the state and expect a good outcome ?

What is going on now is a complete change of tactics from the earlier "fight against oppression" by these perverts. When they wanted sodomy laws overturned they said that it's nobody's business what they do in their bedrooms. Now they are trying to make it everyone's business, and if you don't want to hear about it then you are labeled "homophobic".

How about this - GET BACK IN THE CLOSET! Nobody wants to know about what they do except other perverts like them, let them keep it to themselves. A phobia is an irrational fear, but personally I'm just disgusted.

Homodisgustic? If you don't like sewage does that make you sewerphobic? How about dead bodies? I worked for a funeral home before, but I still don't like corpses. It is basic human nature to be repelled by certain things. The sodomite movement wants the rest of society to go against their instincts and either join or applaud them.

There is no need for children to learn about these things. I'm 31 and I wish I never heard about any gay/LGBT thing, some knowledge we are better off without.

Parents should keep protesting in a massive way and the pressure should be unbearable for that province. If they release a uncompromising refusal and mass boycott as a tactic this civil disobedience will work. As they say you can lead a horse to water but you cannot make him drink unless you are a tortured soul in gitmo. leadership has become the cesspool of the degenerates.
The story of Prophet Lot in the Quran.

Homosexuality is a "learned behavior" that has no right to be misrepresented as a new socially acceptable norm to innocent children at such a young age.

They shouldn't have to be exposed to the philosophy or the act itself in any way.

This is very obviously being done to attempt to confound the Christian Morality that might be taught in the home or that is present in their God given nature.

Actually, what I am dumbfounded by is the fact that the parents send their children to these schools. Free public education is one of the planks of the Communist Manifesto. Since communists, socialists, and nazis don't have any morals, why would anyone send their children to be taught by them? The public school system is run by idiots, so why have an idiot teach your children anything?

Under these conditions, schools are like prison camps and not places to learn basic reading and writing skills. In fact, these are mental and moral retardation centers that are of no social value to anyone. They are a hotbed for child molesters and abusers, and the mental abuse they impose on the children is unbelievable. The children belong at home.

It would be fun to watch thousands of parents refuse to allow their children to go to school. Just empty out the school system. This would mean that one parent would probably have to stay home with the children. Too bad, it has to be done and there's no option unless you want your children to come out acting like Miley Cyrus or Justin Bieber.

It is obvious that the so-called leaders don't give a rat's butt about what the parents think. This premier is feigning being "startled" by statistics when in fact she doesn't care. They just want their perverted agenda put forth no matter how much damage it does to the children. The "premier" is a pervert. So, are the parents going to continue to send their children there? I used to ask politicians questions like this and they all have the same non-answer. They make the parents think that their views are being considered when they are not. Again, communists just do what they want and they don't care about you.

Parents have the option of homeschooling so I suggest that they use it and stop trying to reason with idiots. There's not enough time in life to spend it attempting to convince an idiot to stop doing something that is evil and stupid. If it means lowering your lifestyle because of lost income from one spouse's job, then so be it. Better to stay home with the children where they belong, instead of being indoctrinated into the mind-numbing nonsense of communist libtards.
http://verydumbgovernment.blogspot.com/2015/02/value-of-education.html