Is This Xi Jinping's Jewish Handler? 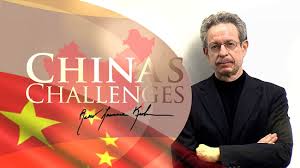 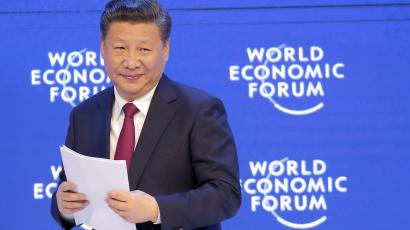 Let me introduce you to Robert Lawrence Kuhn.  He's an international investment banker and the author of "How China's Leaders Think: The Inside Story of China's Reform and What This Means for the Future".

I venture to say Mr. Kuhn is the most recent of many Jewish handlers who have shaped China's political and economic policy throughout its long history.

In Kuhn's book [How Kuhn has programmed China's leaders to think]he explains the "Chinese Dream".  (Remember the American Dream?)

This includes doubling the 2010 G.D.P. per capita (approaching $10,000 per person) by about 2020 and completing urbanization (roughly one billion people, 70 percent of China's population) by about 2030.

"Modernization" means China regaining its position as a world leader in science and technology as well as in economics and business; the resurgence of Chinese civilization, culture and military might; and China participating actively in all areas of human endeavor".   In other words  "Chinese Dream" is just another catch phrase promoting the Illuminati agenda for "sustainable development" [human misery]. 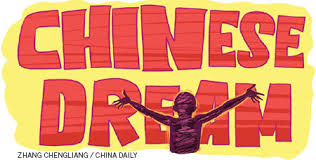 Xi Jinping leader of The People's Republic of China adopted "Chinese Dream" as his slogan in November of 2013.    In May 2013, Xi Jinping called upon young people "to dare to dream, work assiduously to fulfill the dreams and contribute to the revitalization of the nation." He called upon all levels of the Party and the government to facilitate favorable conditions for their career development. Xi told young people to "cherish the glorious youth, strive with pioneer spirit and contribute their wisdom and energy to the realization of the Chinese dream."

The CHRD are not buying  the smooth talk being parroted by Xi Jinping.  Could this be a glimmer of hope for China?

According to the Network of Chinese Human Rights Defenders (March 3, 2014) - "Human rights defenders in China experienced a tumultuous year of government suppression in 2013, yet they continued to demonstrate remarkable strength and extraordinary courage, as documented in CHRD's  annual report , A Nightmarish Year Under Xi Jinping's "Chinese Dream."

"2013 saw the harshest suppression of civil society in over a decade...with human rights and rule of law basically going backwards. Still, the drive in Chinese civil society to keep fighting under difficult and dangerous conditions is the most important asset for promoting human rights and democratization in the country."
- Teng Biao, Chinese human rights lawyer, speaking to CHRD

To cite a couple of examples: 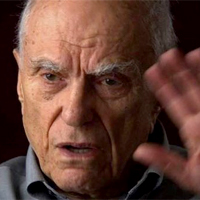 - Sidney Rittenberg (Chinese: æŽæ•¦ç™½; pinyin: LÇ DÅ«nbÃ¡i; born August 14, 1921) is an American journalist, scholar, and Chinese linguist who lived in China from 1944 to 1979. He worked closely with People's Republic of China (PRC) founder Mao Zedong, military leader Zhu De, statesman Zhou Enlai, and other leaders of the Chinese Communist Party (CCP) during the war, and was with these central Communist leaders at Yan'an. He witnessed first-hand much of what occurred at upper levels of the CCP and knew many of its leaders personally. Later, he was imprisoned in solitary confinement, twice, for a total of 16 years.[1] He was the first American citizen to join the CCP. 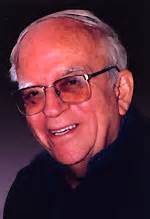 -  Israel Epstein (April 20, 1915 - May 26, 2005) went to China with his parents at the age of two. He began to work for China's revolution in 1933 and became a Chinese citizen in 1957. The noted propagandist once served as editor-in-chief of China Reconstructs (China Today) magazine. From 1983 on, he served as an elected member of the Standing Committee of the National Committee of the Chinese People's Political Consultative Conference, the top advisory body in China.

While a cloud of mystery remains around the Jews' long trek and early years in China, the history of their destination, Kaifeng, is well known. According to the Jewish Virtual Library, the Jewish migrants entered Kaifeng during its most glorious years, as between 960 to 1127. Kaifeng was the capital of Song Dynasty's China, and is believed to have had a larger population than any other city in the world at the time. 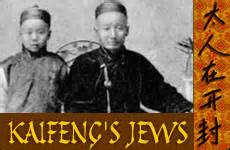 All evidence seems to indicate that the Kaifeng Jewish community enjoyed its early decades in the city, as a pillar at the site of their synagogue states that the Song Emperor invited them to stay in Kaifeng and practice their religion freely. The Jews, who kept giving their children Hebrew names for their first eight or nine generations in China,  kept their religion yet immersed themselves in Chinese culture and society.

Perhaps no two cultural groups revere scholarship more than the Jews and the Chinese, and this common bond perhaps made the Jews feel at home. While some Jews continued to be merchants, a profitable yet less respected profession, the most talented became scholars of either Jewish culture or Chinese culture. The scholars of Judaism became Jewish leaders, while a great number of Jews studied to take China's prestigious civil service exams, which Jews passed disproportionately.

"During the Ming Dynasty (1368-1644), a Ming emperor conferred seven surnames upon the Jews, by which they are identifiable today: Ai (è‰¾), Shi (çŸ³), Gao (é«˜), Jin (é‡‘), Li (æŽ), Zhang (å¼µ), and Zhao (è¶™); sinofications of the original seven Jewish clans' family names: Ezra, Shimon, Cohen, Gilbert, Levy, Joshua, and Jonathan, respectively. Interestingly, two of these, Jin and Shi, are the equivalent of common Jewish names in the west: Gold and Stone."

One of "the more profitable yet less respected professions" which Jewish merchants thrived on during the 17th and 18th centuries were  "the opium wars". According to Wikipedia, 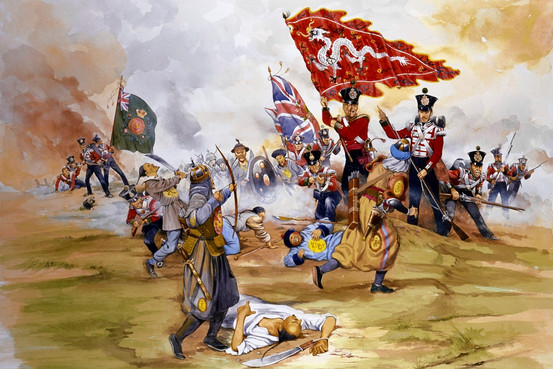 "The demand for Chinese goods (particularly silk, porcelain, and tea) in the European market created a trade imbalance because the market for Western goods in China was virtually non-existent; China was largely self-sufficient and Europeans were not allowed access to China's interior....

The British East India Company had a matching monopoly of British trade. [It]  began to auction opium grown on its plantations in India to independent foreign traders in exchange for silver.

The opium was then transported to the China coast and sold to Chinese middlemen who retailed the drug inside China. This reverse flow of silver and the increasing numbers of opium addicts alarmed Chinese officials."

To deconstruct and simplify: Europe wanted tea, silk and porcelain from China, but China was self-sufficient and needed nothing in exchange from Europe. The result was a trade deficit in which Britain (via its East India Company) owed China an enormous and increasing amount of silver. How did Britain try to solve this tricky problem? It left it to the Jews who formed the nucleus of the East India Company to come up with a neat solution.


Scott Frost writes, "This innocuous phrase--"independent foreign traders"--needs translation. It is of course a euphemism for Jewish merchants".   Actually, here's the name of the man that held the Royal monopoly rights to the Indian opium the British sold in China (and elsewhere) at the time of the Opium Wars.

David Sassoon was born in Baghdad in 1792. His father, Saleh Sassoon, was a wealthy banker and the treasurer to Ahmet Pasha, the governor of Baghdad. In 1829 Ahmet was overthrown and the Sassoon family fled to Bombay, India. This was the strategic trade route to interior India and the gateway to the Far East. In a brief time the British government granted Sassoon "monopoly rights" to all manufacture of cotton goods, silk and most important of all - Opium - then the most addictive drug in the world!

David Sassoon expanded his opium trade into China and Japan. He placed his eight sons in charge of the various major opium exchanges in China.

"In 1832 an important commercial engagement caused him to visit Bombay, to which city he subsequently removed with his family. Here he established the house of David Sassoon & Co., with branches at Calcutta, Shanghai, Canton, and Hongkong; and his business, which included a monopoly of the opium-trade, extended as far as Yokohama, Nagasaki, and other cities in Japan. Sassoon attributed his great success to the employment of his sons as his agents and to his strict observance of the law of tithe."
` 1905 Jewish Encyclopedia; 'Sassoon'.

But don't forget that Sassoon wasn't alone. He went to British government and they granted him a Royal Charter. These things are always a partnership, and there's a longer back story to why the British decided to start pushing dope in China anyway.   The chain of events dates back to the 15th century.

When Chinese rebels overthrew the Mongol Yuan Dynasty and established the Ming in 1400's,  the new regime instituted an "isolationist" policy.

At the time the Chinese merchant navy (called 'Treasure Ships") sailed trade routes from the Pacific to the east coast of Africa.  At the time it was the largest, most advanced navy in the world.  The fifth Ming emperor ordered the fleet scuttled.  Ironically the Chinese withdrew from exploration and innovation at precisely the same time Europe began.  China didn't fall behind immediately.  Cultural isolation brought them a couple of centuries of relative peace and prosperity while Europe raged with wars.

There was sound logic to the isolation policy.  No longer would an expensive Chinese navy go to the trouble of sailing to foreign ports to trade their goods.  Let Europeans come to China to buy tea, silk,and porcelain,  but accept only hard gold and silver.  By the late 18th century the trade imbalance was straining the British silver reserves.

George III's envoy tried one last time to get the emperor to agree to trade for English goods instead of silver, but he refused.  So the British East India Company introduced Indian opium as a recreational drug in China. Opium addiction undermined Chinese society plus silver began streaming into British coffers.  By the time the Chinese government tried to expel the British they couldn't do it with their 15th century weapons and tactics.

When the Manchu emperor ordered the opium warehouses in Canton to be destroyed in 1839, it was Sasson opium, plus a small percentage owned by American opium trader Warren Delano II - grandfather of President Franklin Delano Roosevelt.

Comments for "Is This Xi Jinping's Jewish Handler? "

On their website, The Rothschilds admit to maintaining a presence in China since 1838. That's about as long as China has been a "Zionist" puppet.
So it should come as no surprise that China's nuclear program has been nurtured by Israel. When JFK threatened to cut-off aid to Israel unless Dimona was shut down, he had stepped into a massive pile of Rothschild shit.

Interesting that a Ming emperor conferred the surname Li upon some of the Jews, since Li is one of the top 13 illuminati bloodlines, according to Bloodlines of the Illuminati by Fritz Springmeier.

Henry Kissinger once said "China will be leading the New World Order and it would be wise for Americans not to resist" (paraphrase)
Using China as a spearhead for a NWO has been the Illuminati Jews plan for centuries, However, it is not a guaranteed 100% foregone conclusion their plan will materialize as they would like.

The Chinese leadership are very shrewd and have long memories of the pain & suffering caused by the Jews in past history. It will be interesting to see how it all plays out, But one thing is for sure China is not as easily played for fools as most all Western Nations have been, When the time is right they will let the Jews know who is handling who, and let's not forget, they love to hang crooked bankers.

Isn't there anything where Illuminati Jews don't have a finger in the pie?!

I'm getting so sick and tired of their intriguing/plotting. They are plainly evil.

I wonder what planet they came from. They're absolutely not human!