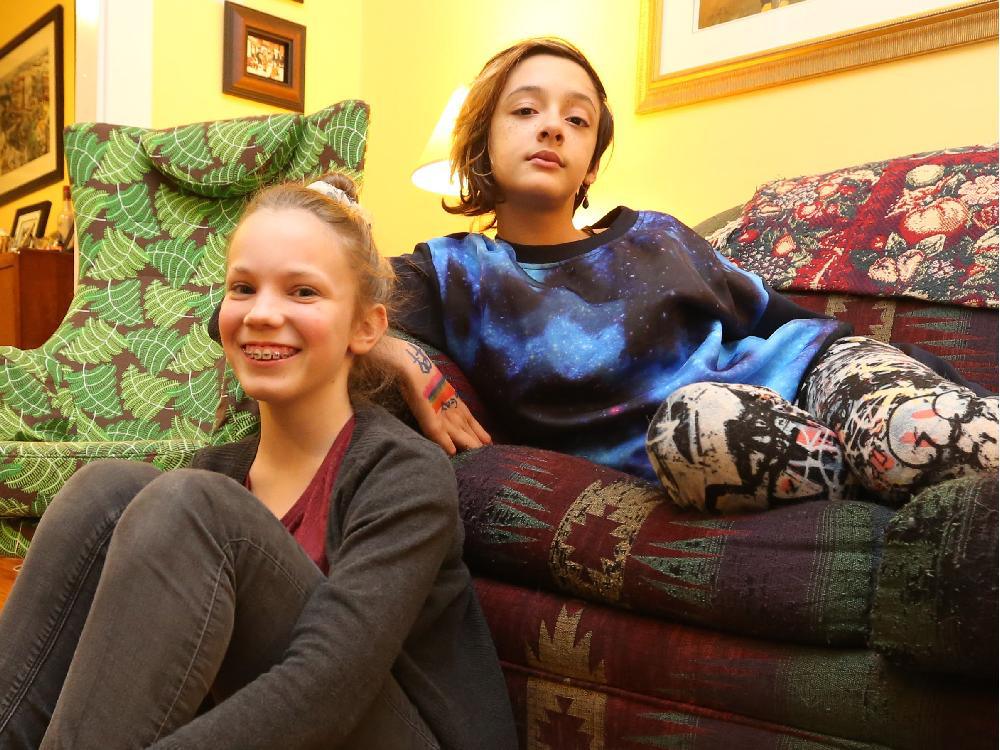 (Polly Hamilton and Quinn Maloney-Tavares, both 11 lead the subversion with the help of
local Illuminati media and local gay activist)

A recent controversy in an Ottawa Catholic school, illustrates how
Catholics are being pressured to reject Christian teaching on homosexuality.
Freedom of thought doesn't apply to our satanic secular society.
London Ont. father Thomas Carter offers Catholics tips on how to resist.

Recently, two grade 6 girls at Ottawa's St. George elementary, a Catholic school, had planned to examine gay rights for a January Social Justice Fair that would be seen by students in grades 4 to 6.

The following day as a form of protest the students painted rainbows on their hands and wore rainbow colored clothes.

The CBC, the Ottawa Sun and the Ottawa Citizen were all over the story.

Obviously the school board hadn't prepared for such a vicious counter-attack because Monday, a school board spokesperson stated the girls would be allowed to go ahead with their presentation.

The board chairman, Ted Hurley, abandoning the school Principal stated: "The Holy Father, Pope Francis, has made it clear that our attitudes to gay and lesbian people should be addressed with love and dignity in an open and transparent way, when he said, 'Who am I to judge?' " 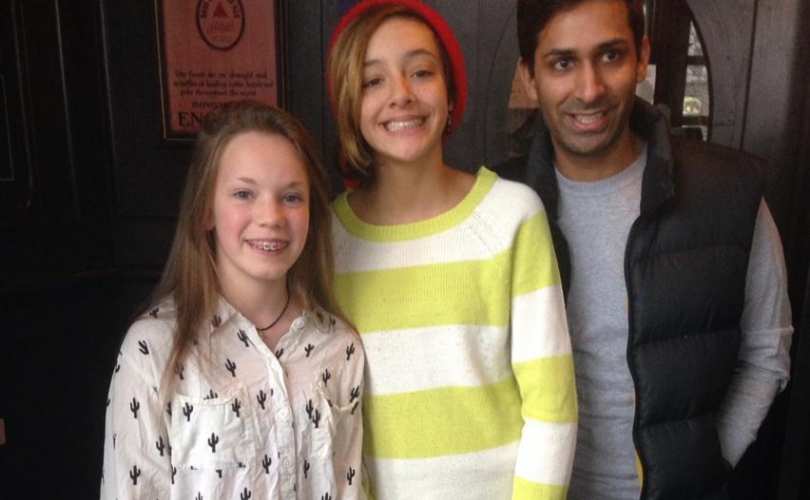 (Here is a photo, taken by one of the girls' moms and posted to Twitter on Sunday posing with homosexual activist Jeremy Dias, founder of Jer's Vision, in an Ottawa-area restaurant. The tweet read: "Lunch with Jer from Jer's Vision.")

Knowing that many Catholic and secular school teachers and administrators are not happy with the onslaught of homophilic propaganda aimed at children I would like to offer a few tips on how to handle this type of thing.

Some call it gayspeak; it's the language that allows them to control the debate. We're talking about words like "gay," "homophobic" and "sexual orientation."  Changing the words people use helps to change the way they think. The traditional priests I've heard talk about "gays" always referred to them as "those who suffered from disordered affections."

In the case above, the Principal may have made a few adjustments to the girls language, saying you have to use the approved Catholic phrase "persons who suffer from disordered affections" as opposed to "gay." As you can imagine, it would have stolen their thunder, as a presentation on "rights for people who suffer from disordered affections" implies they are individuals suffering from a disorder rather than repressed minority fighting for equal rights. 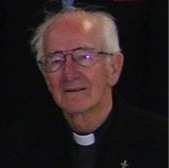 In 2011, 85 year Fr. Donat Gionet was thrown on to the street for confirming the Catholic Church's teaching on abortion and homosexuality during a sermon which coincided with the gay pride parade in Bathurst, New Brunswick. Apparently the town mayor was gay and also a member of the parish council. Rather than defend Church teaching, the good priest was shown the door by his superiors.

But how can this be? Why would a priest be punished for upholding what the Church has always taught?

"Another change ... was the sudden appointment of homosexuals to positions of prestige and responsibility close to the Pope. This plague that would infest, transform, and devastate the Vatican during the time of Paul VI had already begun then [in the pontificate of John XXIII 1958-1963]" 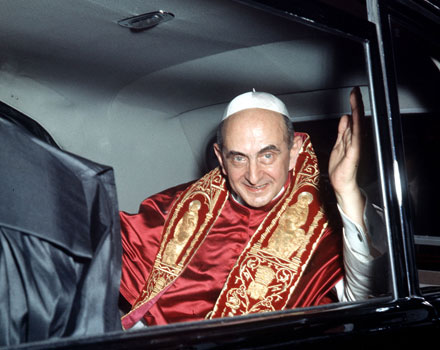 Here is a newspaper article from 1976 describing the public allegations that rocked Italy in 1976 that Paul VI,left, was a sodomite.

Michael S Rose, in his book Goodbye Good Men describes how vocation directors actively tried to screen out candidates who were serious about the teachings of the Church and as a result very few got through.

Not there are no good priests in the mainstream Church, Fr. Frank Pavone does a wonderful job for the pro-life movement. However the higher up the system you go the worse it seems to get and the examples listed here of the hierarchy and school board administrators taking sides with the enemy over disputes on Church teaching are the norm rather than the exception.

Up until Vatican II, the Catholic laity were called the Church Militant. There is nothing militant about them now. Fasting, self denial and prayer were practiced to stay strong mentally. Going to mass in a suit or a dress where the priest celebrates the mass in a solemn way will also strengthen your resolve and make you identify yourself with the resistance. Embrace difficult tasks. Make your every action geared toward victory.

Taking part in anti-abortion rallies lets you meet more like minded people that will become allies. The larger our group grows the more people will have courage to join.

If your spouse is also earning an income, reduce your spending so that you can manage on one person's salary in the event that you lose your position.

Know that you are right. The media is good at making us think that we are the only ones in the world who believe in traditional family values. This is psychological warfare, many people are sick of the homosexual agenda being forced upon us and our children. That said, be prepared to stand alone if necessary.

In 1955, Argentinian President Juan Peron tried to amend the country's constitution to allow divorce. Pope Pius XII excommunicated him and hundreds of thousands of Catholics took to the streets demanding Peron's ouster. Weeks later he was forced out of office and fled to Spain.  The film footage from that time may remind Catholics that this is what the Church, when she is functioning, is capable of.

With the current pope the Catholic Church is going down, and I don't mean that to be a pun, but if the shoe fits....

The time has come for Catholics who are appalled what's been 'coming out' since 2013.  It's time for parents to safeguard their children and 'Come of Her my people'.   The Catholic Church was hijacked, this is the final unmasking of the counterfeit Novus Ordo Church of Paul VI.

What to do?  You can become Sedevacantists.  Or you can begin talking with Eastern Orthodox members.  Or you can remain true to the faith yourself, and network with other parents, and home school.

I am too furious to respond to this and like pieces in the news today. Instead, I send you this despicable "penis-crucifix" as "garnish" to complete the article you have posted (https://henrymakow.com/2014/12/catholic-schools-pressure.html).
Tom Ford's Surprising Charm Necklace
The worst thing about this is that the bishops seem to embrace these sacrileges. You may already be aware of the Satanic crucifixes that the current pope loves and wears.
Francis Kisses Strange Crucifix with Occult Symbolism | NOVUS ORDO WATCH
Thanks for helping let off some steam in the form of sarcasm.

While I agree with the general content of the article,there is an overstretched conclusion regarding PerÃ³n ouster.

PerÃ³n violent and treacherous ouster was indeed carried over by bloody reactionary forces including the catholic church (I should say that the church had a leading position in the revolution).

PerÃ³n tried to find a common ground with the RCC in 1949 with a new constitution in which religion was fully contemplated including a return to state sponsored religion teaching in all levels of national schooling,even defying the powerful and traditional freemasonic superstructure that long ago had implemented a separation between the church and the state.

Problem is RCC wanted full control of peronist movement,especially those wellfare attributions that were traditionally theirs but with the new populist regime were in Evita PerÃ³n hands.She was deeply loved by the people...

The new 1949 constitution confirmed the old Patronato,a mechanism that allowed a certain state control on the church by indicating the bishop's nominations (to avoid subversive prelates activities).

All this generated great repulse in the midst of the high level curia going up to the top Vatican cardinals.

They started to plot Peron demise,they were secretly working in the shadows to oust a twice democratically and loved popular and patriotic government.

Documents in the archives of Jewish organizations shows that even the Jewish envoys and spies working at that time in Europe (and inside the Vatican) were very well informed by the highest prelates (Pro Deo) regarding the prominent role of RCC in Peron's overthrowing.(AJC memorandum-Zachariah Shuster visit to Rome ,January 7th,1958,pp 9-10).

So this divorce argument as a demonstration of church power is frankly an oversimplification of whatever happened in Argentina at that time.

When it comes to today's Catholic Church, no one will understand completely who does not read the book "Plot Against the Church" which was written by high clergy in an attempt to stop V2 from happening.

As one who struggles with same-sex attraction I was glad to read the headline of this article declaring homosexuality as a disorder. Because it is.

I recognize this psychological affliction in myself and wish the Catholic church would stand firm in it's doctrine against homosexuality.

No, I did not choose to be attracted to people of the same gender but I truly believe that this desire can be contained enough so that I can live a life that is pleasing and wholesome.

Even though I am not Catholic I agree with the writer's assertion that the church should denounce homosexuality and embrace it's traditional teachings of purity and chastity... no matter to whom we are attracted.

This is very dangerous to have 10 and 12 year olds giving legitimate recognition to gays in a Catholic school.

The gays do not respect the sovereign right of the Catholic Church hierarchy and it's members to adhere to the written Catholicism or the Holy Bible itself on issues concerning immorality.
They want to instill in the hearts and minds of these young Catholic students that leading a gay lifestyle is an acceptable option within the Church and must be recognized as so.

The danger of this will come into play when a gay approaches an innocent young student for the purpose of fraternizing. If the strait student shuns his advances he knows he will be held accountable for defending himself and his beliefs. It has been psychologically instilled in his brain that this option of rejection will have it's consequences and he'll have to prove to the school that he really loves and respects these predators at the same time.

The whole plan here is to take away the students right to choose. He must respect and recognize a lifestyle that is in direct opposition to the Bible's teaching.

It might be time for the parents of these young children to find them another school.