Why is Israel Absent from ISIS Fight? 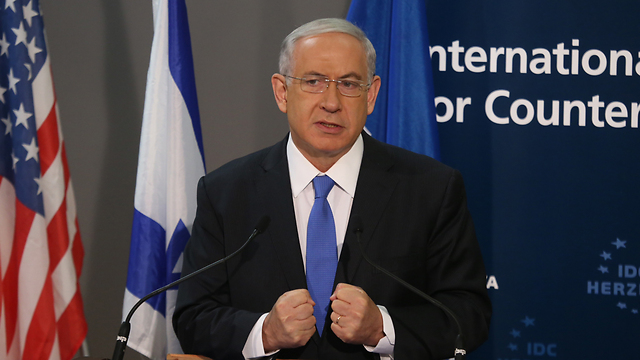 (left, Netanyahu waxes eloquent Thursday)
Why do we suspect that
Israel's opposition
to ISIS is for show only?
by Henry Makow Ph.D
What's wrong with this picture?
Israel gets $3 billion a year in military aid from the US. Over the last 60 years, the Jewish state has received about $250 billion worth of airplanes and armaments.
Yet when Obama appeals for a "a broad international coalition" to fight ISIS, which supposedly threatens the whole Middle East,  Israel is not asked to join.  Canada, Germany, Australia, France, Turkey ..all are asked..but not Israel.
Israel is the strongest military power in the region. But apparently it bears no responsibility to help contain this "threat."
How serious could Obama (or Israel)  be about combating the Islamic Caliphate?
However, don't count Israel completely out. Netanyahu will contribute large quantities of hot air:
On Thursday, an Israeli website reported,  Netanyahu said that "Israel fully supports Obama's call for a united action against ISIS."

The Likud leader stressed that all terror groups "present a clear and present danger to the peace and security of the world and to our common civilization" and that if "they gain ground somewhere, they gain ground everywhere."

Fighting these groups "requires weapons, defensive and offensive, but above all it requires - I believe - clarity and courage. Clarity to understand they're wrong and we're right. They're evil and we're good. No moral relativism there, at all," insisted Netanyahu.

Apparently things haven't always been so black and white. 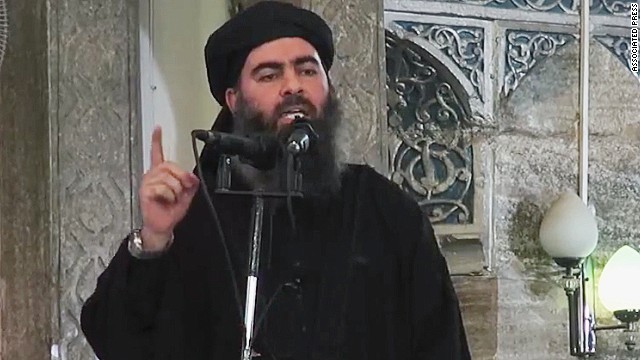 (The "new face of terror": Mossad agent al-Baghdadi. Our Zionist colonial elite conspires against us..)
Netanyahu showed us his true colors last June, after ISIS captured Mosul.
"ISIS is good for Israel," he told Tel Aviv University's INSS think-tank. Washington should stay out of the Iraqi conflict - and let the Sunni militants defeat the Shia-dominated government of prime minister al-Maliki and break-up Iraq. "This will weaken Iranian influence in the Arab region." he said.
Apparently Israel's fondness for ISIS is reciprocated:

Asked in July why ISIS wasn't helping Hamas, an ISIS spokesman said, "it is not interested in fighting Israel at this time. Rather, its focus remains fixed on dealing with "Muslims who have become infidels."

He said that "In the Qur'an, Allah ordered us not to fight Israel or the Jews."

In response to Israel's "Operation Protective Edge," ISIS said that they were simply too busy killing fellow Muslims to bother with a war on Jewish people. "The greatest answer to this question is the Qur'an, where Allah speaks about the nearby enemy-those Muslims who have become infidels-as they are more dangerous than those which were already infidels," explained an ISIS spokesman.

As readers of this site know, ISIS was created by the CIA, the Mossad and Saudi Arabia to get rid of Assad of Syria. Has it gone rogue? I doubt it.

Israel has admitted to treating 1,000 wounded Syrian rebels in its hospitals over the last 14 mos. How many of these were ISIS?  Do you think this is the extent of their involvement?
The question remains, just how serious is Obama about stopping ISIS, a group Israel, the US and Saudi Arabia started in the first place?
Is this just a back door way to help "moderate" rebels and finally eliminate Assad?
What is the Illuminati's hidden agenda? Terror attacks on America by ISIS? Albert Pike's World War Three pitting "Islam" against the Zionist West, minus Israel, who shall be protected?
----
Related- Much More on israeli Collaboration with "Rebels"
Palestinian Parody of ISIS
Ten Signs ISIS is a Scripted Psyop
Russia Warns US Against Air Strikes in Syria
First Comment from Dan:
Let's not overlook a bit of news that media mostly suppressed.  August 26th UK Guardian:Syria offers to help fight Isis but warns against unilateral air strikeshttp://www.theguardian.com/world/2014/aug/26/syria-offers-to-help-fight-isis-but-warns-against-unilateral-air-strikes

Walid al-Moallem, the Syrian foreign minister, said his government was ready "to co-operate and co-ordinate" with any side, including the US, or join any regional or international alliance against Isis. But he said any military action inside Syria should be coordinated with the Syrian government.

"Any strike which is not co-ordinated with the government will be considered as aggression," he said.Sound reasonable?  Obviously "ISIS" is Assad's enemy.  Our State Department and politicians have condemned Assad for fighting them as a 'Tyrant'. This announcement followed the "Dictators" recent re-election by Syrian voters, August 25th.
I live in one of the largest American cities, and 'international' city - absolutely everybody is here.  This is where I keep my finger on the pulse of American public perception.   Yet NOT ONE person I've asked has heard of either of these news items. The Administration never publicly responded to the Syrian government's rational offer to co-operate with the US and NATO insofar as breaking up ISIS. Exactly one year ago, Sept. 11 anniversary week, or officially "Patriot (act) Day", Obama withdrew his demand for Congressional approval to bomb Syria. The web of lies had gotten a bit crossed when Media was reporting we were backing 'the rebels', who turned out to be the same 'Al Queda' (now ISIS) the sheeple thought we were fighting.   They blew their cover.  Worse, they were already massacring the indigenous Syrian Christians who lived there unmolested since the first century.  The Administration is so Christian-hating that they seemed to believe their own propaganda that 'this is not a Christian nation'.  They thought they had all the Churchians under televised hypnosis, but people noticed.   More importantly,  military combat CO's noticed and might have mutinied if they'd been ordered to fight FOR Al Queda and blow up Christians.  The Administration lost that round.  During the months of October and November all the presidents and prime ministers flew to meet with Netanyahu or vice versa to 'huddle' and get the new play.  Including Putin.   I can only conclude that the same scenario that former Gen. Wesley Clark explained in this clip.  General Wesley Clark: Wars Were Planned - Seven Countries In Five Years
Everything that's happened since 911 was due to a plan to 'take out' Iraq, Syria, Egypt, Libya and IRAN.   It's not ALL about Israel.  Zionists have a big stake it but the plan is a combine of the powerful ancient mafias behind Globalism. Israel is hardly 'missing' from the war on Syria.  They've already carried out missile attacks on strategic targets in Syria for years.  Four days ago the IAF stepped up sorties on the Syrian border.  http://www.algemeiner.com/2014/09/07/iaf-bolsters-sorties-along-syrian-border-any-spillover-will-cost-them-dearly/Keep in mind Israel seemed 'missing' from the 2002 Baghdad Blitzkrieg and Iraqi occupation too.  They won't squander their US supplied jets and missiles so long as the US is willing to assume the high costs of war in budget deficits and lives.
Comment from Steve:
Thursday morning, NBC rebroadcast their live Today Show coverage of the events of 9/11/01.  Video, such as is posted on your site is always debunked as having been "altered."  But, this morning, they showed the "real" events. Or at least the "real" events as they were presented that fateful day. Being able to watch the shots of the plane entering and exiting the tower on a modern HD plasma screen leaves little doubt that "nose in/nose out" is exactly what was shown.
I recorded it with a modern DVR and have replayed it multiple times. I made the mistake of posting an observation of that on Dailykos. I have been suspended from that site for three days because they do not allow anyone to question the "established facts" of that day.
Given that we are about to be dragged into yet another war which can be directly traced to 9/11, somehow the American public needs to become aware of what really happened. Otherwise intelligent people act exactly like those who deny the reality of climate change because they simply do not want to recognize THE TRUTH. It isn't pretty, but it is still the reality of that event.

Comments for "Why is Israel Absent from ISIS Fight?"

This latest ISIS PSYOP is being used as a smokescreen for military aggression against Syria. It is absolutely trivial to believe that America is going to help Syria out here by destroying the very subversive entity that they themselves have organized and funded to overthrow Assad and his government. The fact of the matter is that the rebels in Syria are loosing the war and can't win without foreign military support. Once Syria has been "air striked" into the stone age like Iraq a NWO dictater can be installed. ISIS and the Syrian military must both be defeated in the end for this to be achieved.

As for Israel and their Israeli/American Neo Cons in Washington they are the architects of American foreign initiatives in the Middle East and have been for years. Israel is more in the business of starting the wars rather than fighting them. It's better to persuade and control a foreign nation to fight your enemies and secure your borders for you than having to do it yourself. I really feel
for Secretary of State John Kerry, he's feeling these realities and is stuck trying to sell this garbage to the world.

Interesting points, Henry. While we still have much to learn about ISIS, if it really represents Islamic geopolitical interests, why isnâ€™t it focusing its actions more against Israel, especially after the recent high-profile outrages committed against the people of Gaza? If, as the spokesman quoted says, they are neglecting Israel because they are focused on "Muslims who have become infidels," then why are they putting such social-media attention on beheading American journalists? Those journalists were NOT "Muslims who have become infidels."