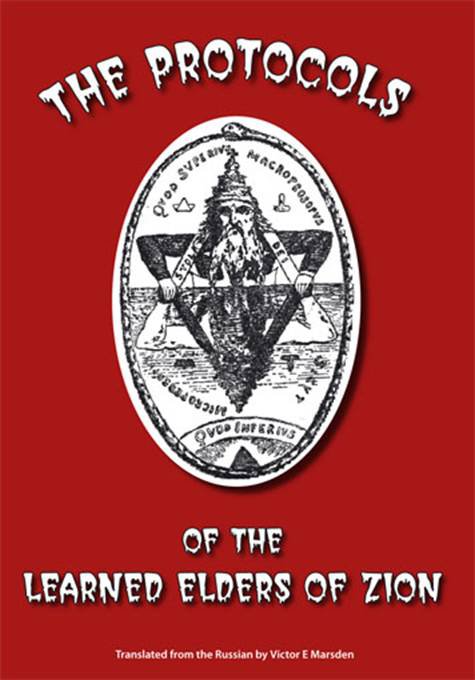 The Protocols are exactly what they say they are:
an outline of Jewish tribal plans for world domination,
overflowing with racist contempt for non-Jews.

"There is apparently an inner circle of "illuminated" Talmudic Jews bent on tribal world domination.  Yet outside this are innocent Jews, like my late father, who have no part in it whatsoever.  Persecute such unwitting Jews, and you will create a pretext for charges of "anti-Semitism," which is exactly what the inner circle wants."

Reflections on Karl Bergmeister's "Authenticity of the Protocols"

James Perloff is author of the classic The Shadows of Power (1988); his latest book is Truth Is a Lonely Warrior.


Over the years, I have explored many explanations for the Protocols, such as that the Illuminati let them be published with a Jewish "spin" in order to provoke pogroms, which would in turn lead to an exodus of Jews into Palestine, and thus establishment of Israel.

As time goes on, however, it has become regrettably clearer to me that the Protocols are exactly what they say they are: an outline of Jewish tribal plans for world domination, overflowing with racist contempt for non-Jews.

Nothing has persuaded me of this more than Louis Marschalko's remarkable 1958 book The World Conquerors,   (although I do not agree with Marschalko's belief that world domination was a command of Jehovah).

It should be obvious why the Third Reich opposed Zionism and Bolshevism simultaneously.  The Talmud seethes with hatred for Christianity.  So does Bolshevism.  Bolshevism was financed by Talmudic Jews - Schiff, the Warburgs, the Rothschilds.  As we have documented on this website,  Jews dominated the Bolshevik regime from Trotsky down.

Lenin made anti-Semitism a capital offense; the Bolsheviks destroyed tens of thousands of churches and murdered hundreds of thousands of priests, while leaving synagogues and rabbis mostly untouched.  And wherever else communist revolution raised its head, Jews took the lead, whether in Hungary (Bela Kun) or Germany (Karl Radek and Rosa Luxemburg).  Marx himself was of course Jewish.

To the Germans, Bolshevism was largely a political arm of Talmudism. And ironically, everything the Germans were accused of (master race, plans for world conquest, millions exterminated in camps) appears to be a mirror of Talmudic Bolshevism's reality.

Yet to this we must add balance.  My late father was a Russian Jew, yet he was a completely assimilated American.  He knew nothing of the Talmud; all his friends were Gentiles. Likewise, I have, and have had Jewish friends who are Christians and fine people; they know nothing of a Jewish plan for world domination and would be revolted by it.

However, I have also met, face-to-face, a racist Zionist Jew who literally turned his back on me the moment he learned my mother wasn't Jewish (meaning I was not a "true Jew" in his eyes).  Just as I cannot deny the innocent Jews I have known, nor can I deny the existence of the type of Jews described by Benjamin Friedman, Myron Fagan, General Patton, Martin Luther and so many others.

There is an analogue here in Freemasons, who seem to be the Gentile vassals of the Jewish Illuminati bankers. There are countless low-ranking Freemasons who are not involved in any sinister, satanic activity.  My maternal grandfather was a Freemason; I'm sure he knew nothing.  Yet I have also personally encountered a Freemason who openly boasted of Satan worship.

I have read the accounts of ex-Masons who, as rites of passage to the upper echelons of Masonry, went through satanic rituals. Yet I have encountered other ex-Masons who went through rituals to the same upper levels, and bitterly denied there was anything satanic to it.  So, which side was telling the truth?  Obviously, BOTH were.  Clearly, there is more than one strain of Freemasonry.  The innocent strain serves as a front that protects the Luciferian one.

I believe a parallel dichotomy exists in world Jewry.  There is apparently an inner circle of "illuminated" Talmudic Jews bent on tribal world domination.  Yet outside this are innocent Jews, like my father, who have no part in it whatsoever.  Persecute such unwitting Jews, and you will create a pretext for charges of "anti-Semitism," which is exactly what the inner circle wants.

Muddying the waters further is the assertion of Arthur Koestler, in his book The Thirteenth Tribe, that the majority of those calling themselves "Jews" today are not descendants of Abraham but of the ancient Khazars.

Regardless, this is the truth: all people are God's children, created in His image.  And anyone who tries to destroy or enslave these children - as the Protocols advocate - commits an abomination that invokes God's judgement against himself.

This article here has the all the truth clarity that Mr. Perloff's works hold and I thank him. Everything here is "spot on" as always.

I grew up in the Catholic Church and attended public schools during the sixties when being Jewish was not the issue it is today. Back then patriotism and nationalism were strong. People called themselves Americans and not Italian, Irish, German or Jewish Americans. Also, church attendance was high back then because people on the whole were closer to God.

Today, there is only one promoted and politically correct form of nationalism  and that is Israel and the religion of Talmudic Judaism. America today has fallen victim to this entity and has trashed it's Constitution and Christian Republic in exchange for this monster, Washington has a new God. World Order Marxism is their new Constitution and religion that it defends and wars for.

The 'Protocols of the Elders' defines and outlines the World Order strategy for Jewish world rule along with their desired results and intent. As Henry Ford once noted, they " fit" in the present course of world events and present trends.

James is right here, the everyday Jew or Gentile Freemason is not privy to or in on this "fix". They, like everyone else, are led by their leaders without having a clue as to what this World Order is really all about.

Comments for " Satanic Protocols of Zion Camouflaged by Dupes "

I read the World Conquerors as a teen and it was like St.Pauls road to Damascus revelation. A terrific book. Interesting analogy of dupes as Masons to ordinary Jews.........

Hi Henry. The turmoil in Syria and Russia are perfect examples of what the Protocols are about. Globalist criminals instigated the trouble in both countries because they are allies of Iran and Iran is the main target. This ISIL group are hired globalist thugs and are being used as a Trojan horse to get at Assad. It`s the same pattern of taking over countries with vast natural resources like in Iraq and Libya.

Taking over these natural resources is not about money because globalists have more money than what can be spent in a dozen lifetimes - it`s about control!! Many people don`t realize that if globalists succeed the NWO is closer to becoming a reality. History proves that this 'order out of chaos' or 'thesis - anti thesis - synthesis' pattern has been used for centuries and I have no doubt that the oil rich countries in South America are being set up for the same thing

Dr. Makow, the human family is and will be forever in your debt for these type of articles. PRICELESS!! ABSOLUTELY PRICELESS!! The Father calls all of those who belong to His Son. They are the NEW Chosen People.

All of the verses in the Old Testament speaking of putting â€œIsraelâ€ at the head of the nations refer to those who have accepted the Messiah (Jesus of Nazareth) as their King and Priest in the New Covenant. They are the true â€œSeed of Abraham, which is Christ and His sheep.â€ The people calling themselves â€œJewishâ€ need Christ Jesus as much as anyone else among the sinners of this planet.

Christian Zionists and Dual Covenant types spit in Christâ€™s face, especially those who want a third temple rebuilt and animal sacrifices to resume. What an AFFRONT to the finished work of the TRUE REDEEMER. Sickening. We love you, Henry. May the Most High protect you with a hedge no one can transgress. Jesus is the Christ, the Son of the Living God!!!

That organizations are made of circles within circles, with the inner crowd knowing more than the rest is common sense.

As much as there being "innocent" strains of freemasonry, also common sense, but it`s clear to me that the lure of masonry basically attracts quasi-psychopathic, proto-psychopathic characters, who desire fast and unmerited economic ascension and perks from the brotherhood while feeding their egos with a stupid sense of superiority.

My great-grandfather was a mason, by the way. In my mind he sold out his soul; I won't defend him.

"It should be obvious why the Third Reich opposed Zionism and Bolshevism simultaneously". Yes, because Hitler in Mein Kampf had already expressed his fanatic hatred for the eastern "barbarians". The institutional hatred of the East was NOT against the leadership, but against the whole Slavic people - you think that the endless massacres promoted by the Wehrmacht in Russia were because they were gloriously "battling Jewish supremacy"?

No, it happened because they considered the Slavs subhuman. The order was to kill anything that moves, man, women, dogs, anything. Hitler was a genocidal maniac, traitor, high esoterist, ( he harassed some of the lower orders but kept some as Thule and Vril for himself, like these "heroes of the people" always do ) and funded by the same conglomerates that funded the Soviets, as Sutton described.

His feelings towards Christianity were exposed by Hermann Rauchning ( some put his authenticity into question - I think it's true ).

Do people think that Amschel/Rothschild simply walked into London from the continent and took over the Bank of England because he was "smart"?

Why would the "Aryan" aristocracy with their private armies allow this? Karl Marx after agitating in the continent found refuge where? Why London, of course. Why would the aristocracy shelter a known revolutionary-socialist agitator?
Romanticizing the Third Reich and neurotically emphasizing the Jews is a sterile, self-defeating dead-end - no wonder it's promoted.

The article by James Perloff is quite refreshing as he does not use a "broad brush" to describe the agenda of all the jews and masons of the world.
However, at the end of the article he does an about face and paints mankind with the age old cliche that "all people are God's children, created in His image".

I disagree. The image (the character) of the Creator God is either good or evil and cannot be both at the same time.

I for one believe the character God is good and his opponent Satan's character is evil.
We humans have a free choice to choose whom we will serve and obey.

Unfortunately, at the moment, it looks like the ones that chose evil are winning.