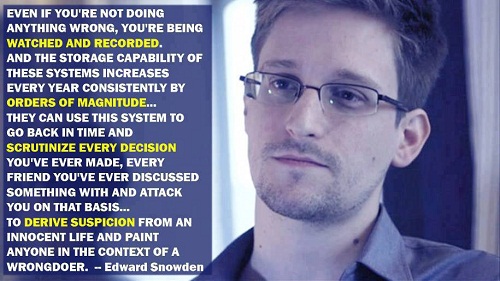 Left, Edward Snowden: NSA " even keep track of who is having an affair or looking at pornography."
"The ultimate goal of the NSA is total population control." - Ex-NSA Official
But who controls the NSA?  The Illuminati bankers.
Just as the Illuminati control their own members through blackmail, as humanity is inducted into their cult (at the lowest level,) they control us in the same way.
The totalitarian template of the NWO is Cabalist Judaism, a satanic cult
on which the Illuminati is based. This article shows the evolution of blackmail from politicians to the public.
"To gain the same intimate detail for an entire country, the Stasi had to employ one police informer for every six East Germans...By contrast, the marriage of the NSA's technology to the Internet's data hubs now allows the agency's 37,000 employees a similarly close coverage of the entire globe with just one operative for every 200,000 people on the planet."
by "George Washington"
For Zero hedge
(Abridged by henrymakow.com)

It is well-documented that governments use information to blackmail and control people. The Express reported last month: "British security services infiltrated and funded the notorious Paedophile Information Exchange in a covert operation to identify and possibly blackmail establishment figures, a Home Office whistleblower alleges."

A Whistleblower Mr X,  said  [the pedophile group] was being funded at the request of Special Branch which found it politically useful to identify people who were paedophiles...."
There is widespread speculation that Pope Benedict resigned because of sexual blackmail.

And the American government has a long history of blackmailing people - including high-level officials- with knowledge of their sexual peccadilloes....FBI head Hoover was famous for blackmailing everyone ... including politicians.  The New York Times reports:
"J. Edgar Hoover compiled secret dossiers on the sexual peccadillos and private misbehavior of those he labeled as enemies -- really dangerous people like ... President John F. Kennedy, for example."
Upon taking office on Roosevelt's death in early 1945, Harry Truman soon learned the extraordinary extent of FBI surveillance. "We want no Gestapo or Secret Police," Truman wrote in his diary that May. "FBI is tending in that direction. They are dabbling in sex-life scandals and plain blackmail."

J. EDGAR HOOVER
After a quarter of a century of warrantless wiretaps, Hoover built up an archive of sexual preferences among America's powerful and used it to shape the direction of U.S. politics.  He distributed a dossier on Democratic presidential candidate Adlai Stevenson's alleged homosexuality to assure his defeat in the 1952 presidential elections, circulated audio tapes of Martin Luther King, Jr.'s philandering, and monitored President Kennedy's affair with mafia mistress Judith Exner. And these are just a small sampling of Hoover's uses of scandal to keep the Washington power elite under his influence. 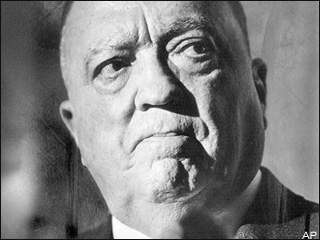 "The moment [Hoover] would get something on a senator," recalled William Sullivan, the FBI's chief of domestic intelligence during the 1960s, "he'd send one of the errand boys up and advise the senator that 'we're in the course of an investigation, and we by chance happened to come up with this data on your daughter...' From that time on, the senator's right in his pocket." After his death, an official tally found Hoover had 883 such files on senators and 722 more on congressmen.

In the Obama years, the first signs have appeared that NSA surveillance will use the information gathered to traffic in scandal, much as Hoover's FBI once did. In September 2013, the New York Times reported that the NSA has, since 2010, applied sophisticated software to create "social network diagrams..., unlock as many secrets about individuals as possible..., and pick up sensitive information like regular calls to a psychiatrist's office, late-night messages to an extramarital partner."

The ACLU's Jameel Jaffer has warned that a president might "ask the NSA to use the fruits of surveillance to discredit a political opponent, journalist, or human rights activist. The NSA has used its power that way in the past and it would be naÃ¯ve to think it couldn't use its power that way in the future."
Even President Obama's recently convened executive review of the NSA admitted: "[I]n light of the lessons of our own history... at some point in the future, high-level government officials will decide that this massive database of extraordinarily sensitive private information is there for the plucking."

Indeed, whistleblower Edward Snowden has accused the NSA of actually conducting such surveillance.  In a December 2013 letter to the Brazilian people, he wrote, "They even keep track of who is having an affair or looking at pornography, in case they need to damage their target's reputation." If Snowden is right, then one key goal of NSA surveillance of world leaders is not U.S. national security but political blackmail -- as it has been since 1898.
Today, the NSA tracks people's porn-viewing habits in order to discredit activists.  The NSA also gathers and keeps nude and suggestive photos of people in order to blackmail them.

The Associated Press notes: "The stockpiling of sexually explicit images of ordinary people had uncomfortable echoes of George Orwell's "Nineteen Eighty-Four," where the authorities -- operating under the aegis of "Big Brother" -- fit homes with cameras to monitor the intimate details of people's home lives."

FBI whistleblower Sibel Edmonds alleged under oath that a recently-serving Democratic Congresswoman was secretly videotaped - for blackmail purposes  - during a lesbian affair. (Other Congress members have been blackmailed as well.)
Edmonds tells Washington's Blog that judges who are too "squeaky clean" are often not approved for nomination ... while ones with skeletons in their closets are. And she says that high-level FBI managers have publicly confirmed this blackmail process.

There have been allegations of blackmail of gay activities within the U.S. armed forces for years. 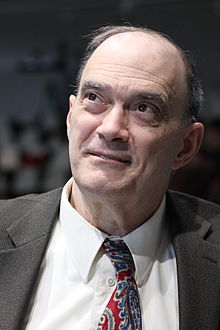 And even the raw data on American citizens collected by the NSA is shared with Israel.  This likely includes Congress members and other politicians, as well. Bill Binney, left, the NSA's senior technical director turned whistleblower- told Washington's Blog that the NSA's blackmail tactics are the same as those used by the KGB and Stasi:
Binney told the Guardian recently: "The ultimate goal of the NSA is total population control."

And Binney tells Washington's Blog that NSA surveillance allows the government to target:

"[CIA head] General Petraeus and General Allen and others like [New York State Attorney General] Elliot Spitzer"
"Supreme Court Judges, other judges, Senators, Representatives, law firms and lawyers, and just anybody you don't like ... reporters included."
NSA whistleblower Russell Tice (a key source in the 2005 New York Times report that blew the lid off the Bush administration's use of warrantless wiretapping), also says: "The NSA is spying on and blackmailing its overseers in Washington, as well as Supreme Court judges, generals and others. The agency started spying on Barack Obama when he was just a candidate for the Senate.
And senior NSA executive Thomas Drake explains to Washington's Blog that the NSA can use information gathered from mass surveillance to frame anyone it doesn't like.

Hoover himself was practicing homosexual. Denial campaigns persist, but that's expected.  Nobody cares what Hoover did in his private life, except for the fact that made it his business to violate everyone else's right to privacy. Hoover set the precedent for the shape of things to come in this country.   In 2011, Hollywood released a 'makeover' of Hoover's tainted image.  None other that Leonard di Caprio was cast to play Hoover - a man who resembled a cross between an English pug and a frog in real life. Hollywood 'tuff guy' legend Clint Eastwood directed.  In other words, Eastwood was paid to be the front-man while production was actually the work of gay activists.  The script was the work of the writer who did the script for "Milk".

Hoover built the FBI reputation that it's agents were squeaky clean, uncompromisable.  That's true of the rank and file.  This second generation Special Agent (retired) joined the agency the year Hoover died (1972).  He is in total denial of Hoover's double standard.   The man is so sincere in his patriotism that I didn't laugh when he cited Hoover's rank as a 33Â° Freemason as proof of Hoover's integrity.   It's sad to see how the honest men are fooled by members of a cult that runs much of the world.   https://www.youtube.com/watch?v=NcA_V0RD1KU

"[Sibel] Edmonds tells Washington's Blog that judges who are too "squeaky clean" are often not approved for nomination ... while ones with skeletons in their closets are."

That's the reality.  I learned all about it working at a state capitol city newspaper nearly 40 years ago.   I suppose FBI agents couldn't see it because they're required to be clean and sincerely patriotic even in their dreams.

I have to disagree with the concept of more secure communication.

We live in a society where to receive justice we need hire a lawyer to present our â€œtruthâ€ for us. This is the way of the â€œsecret societiesâ€.
One version of truth for the rubes and one for the enlightened.

We in the least need governments to communicate openly and with full disclosure. In that way we donâ€™t see the video of Obama whispering
to Medvedev in a dark corner. â€œafter my election I have more flexibility" What nation would know where they stand with the US after such an
utterance? Say that with a spine and full media coverage and everybody knows which end is up. Saying what we mean and meaning what we
say would transform the world.

Henry, In my humble opinion, this was absolutely how Obama care was declared legal by the Supreme Court. We all watched Chief Justice Roberts fold like a cheap suit and run out of the country for two weeks right after he stuck a dagger directly into the heart of the American people. We had all the confidence in the world in this "solid conservative", but in the end we all walked away with a betrayed heart and a sore rear ..

Henry, I must respectfully disagree with JG when he says there is no such thing today as a secure communication line.

All we have to do is activate "the Cone of Silence": https://www.youtube.com/watch?v=g1eUIK9CihA

The biggest dangers of high tech international espionage today is the loss of confidential communication between world leaders either by phone or email.

The Oval Office phone has been taped going all the way back to Richard Nixon and probably even further.There is no such thing as a "secured line" of communication anymore or anywhere. Therefore nothing can be said in "strict confidence" and that in itself impedes the diplomatic process. Even person to person contact at the negotiating tables of world leaders are not "bug free" either because even the walls have ears, literally.

Foreign Diplomacy in Washington has successfully been sabotaged by this high tech espionage ring of the NWO that seeks war and division between all nations that seek their sovereignty like the people in East Ukraine today.

There can be no peace in the world without trust, confidence, and communication.