The Battle Against "The Banking Swindle" 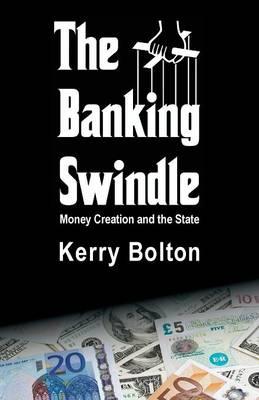 opposition to the mother of

which has enslaved mankind.

Kerry Bolton's new book, "The Banking Swindle"  begins by relating how the bankers conquered Europe via Holland and Britain and later the world through the US. He describes how the current financial system came to be and what problems it brings.

But where the book really takes off is the description of the public discourse in the thirties that arose in reaction to the Great Depression. Opposition to the financial system itself was universal throughout the industrialized nations. Social Credit activists were active throughout the West. But also other financial systems were both promoted and, what is more, even implemented.

New Zealand implemented financial policies that were very similar to Hitler's Germany. A large scale social housing program financed with State Credit  relieved 75% of the unemployment during the Great Depression. This iconic project has disappeared in a memory hole. Canada also printed its own money from the mid thirties up to the early seventies. Here is an eye-opening account of the Canadian economy with Government money.

The level of public involvement seem to have been huge. They were talking banking and monetary reform in pubs and on street corners, all over the West.

In Britain itself there were the 'Green Shirts for Social Credit', started by John Hargrave. 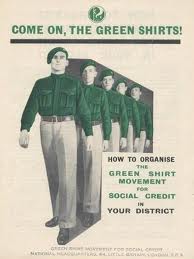 The Green Shirts kicked off in 1930. Hargrave soon realized that nothing could be done through Parliament and that a mass agitation was necessary.

Bolton: "Hargrave advocated a militant campaign that would break the media blackout. The Green Shirts took to the streets on marches, behind drums and banners, held street corner meetings, and sold newspapers on the street, delivering the Social Credit message in a cogent manner. Facing the violent opposition of the Left, they were noted for their discipline in the face of provocation. They were also noted for throwing green painted bricks through the windows of banks and using the consequent court cases to publicize their views."

Bolton analyzes the struggle for monetary reform in all major western nations, including the USA with Father Coughlin, who at his peak had 40 million followers.

I must say that this comprehensive overview was eye opening for me.  I never really realized what kind of trouble the Money Power faced back then.

It also shows that the system may not be quite so unassailable as it often looks. True, the consequences of today's depression  have been much milder than 80 years ago. Millions of people actually starved or were close to starvation back then. However we feel about the welfare state, it has prevented that kind of mass suffering this time around. On the other hand: we can also be sure that this is a vital part of the Money Power's calculations. Because hunger is a powerful motivator, the usurers have learned to sedate us to the nastiest side effects of our hidden slavery.

The book analyzes a number of alternative financial systems that were simply not (yet) part of the banks' control grid. For instance Czarist Russia financed its modernization without the usurers and was rapidly developing into a rival of the West. This, undoubtedly, was the prime reason for the 'revolution'.

Or how about the  Confederate "Greybacks" during the Civil War? I had never heard of them. Apparently they were actually real debt free notes, as opposed to the interest-bearing bonds backed Greenback. As always, the money system reflects the real dynamics behind the scenes. I'm not well enough versed in US history to come to any conclusions, but Bolton makes a very plausible case that the Confederacy was a real rebellion and that they were cut off from bankster loans.

Just as the British inflated the "Continental", George Washington's debt free unit, the Union destroyed the "Greyback" through counterfeiting.

The Banking Swindle is in many respects an effort to reconnect the Right to its roots. After reading the book, I understand why Bolton considers the classical populist resistance against Money Power the true Right. In this day and age, the true Left-Right paradigm has been so utterly discredited because this insight has been lost. The Right today is associated with Capitalism and the current financial system.

People in the Truth Movement are a pretty heterogeneous bunch. The kind of awareness that it represents and which is now influencing more people cannot be called 'conservative', even though personally I feel very connected to real conservatism.

The Banking Swindle exposes both the scale and the nature of a truly international, diverse and very powerful monetary reform movement. Post war propaganda and guilt by association have labeled these movements as 'fascist', but many of them were not, and fascism itself has been demonized. Bolton does a wonderful job of rehabilitating them and showing their profound importance.

This is exactly the kind of inspiration and insight we need to build on.

Anthony Migchels is an Interest-Free Currency activist and founder of the Gelre, the first Regional Currency in the Netherlands. You can read all of his articles on his blog Real Currencies

I haven't read the book, but would be hard-pressed to believe that union counterfeiting was the cause of the hyperinflation of the confederate currency.

Rather, the difference between the Union and Confederate economies tells the whole story. In the North, new money (as fiat credit) was issued for railroads, steel mills, family farms, etc - this was no mistake, but the whole platform of the Republican party that caused the South to secede. In the South, a slave labor economy persisted with almost no industry to speak of.

So the greenback - despite the burden of bearing some interest to bondholders - created value worth more than the debt. And the greyback - despite being interest free - barely kept the South functioning. The point is not so much the interest, though interest free is preferable - it's what the money is being used for.

So when we hear about the Social Credit upsurge of the 20s and 30s, one has to wonder why General Douglas, so glorified in the masonic "New Age" magazine, had nothing to say of using said credit to increase the productive powers of the economy in the way Lincoln demonstrated only 2 generations earlier.

To call the Confederacy a genuine grassroots rebellion against northern tyranny is ridiculous, to put it mildly. Please name one grievance an average Southerner could cite for this infinitely foolish decision. The context of the American civil war was economic war between American nationalists and European bankers. But the only reason for secession was to maintain and expand slavery for the benefit of those bankers. The fact that an "interest-free currency" could be maintained in this context shows you that the bankers sometimes value control of resources and trade over and above the value of debt service.

Comments for "The Battle Against "The Banking Swindle" "

Now more than ever I am convinced the sage words of a carpenter 2000 years ago is the ONLY way to defeat the money powers.

"Give everything up and follow Me" He said. It's by money, and belongings, that we all are voluntarily enslaved. He was born with the animals, wore tattered clothes, preached to the poor, healed the sick and maimed whilst having nothing to say to the rich but call them hypocrites, -and- he was having an amazing impact on the society of the day.

The money power couldn't touch Him and after all was said and done the only means of silencing Him was false accusation leading to His death. I'm not so convinced any more that He went to the cross JUST as a selfless act of love for His people. His whole life was a prime example of how we should live ours, poor in things but rich in spirit and love.

Our Creator promised to give us only what we needed, and nothing that we wanted. He even said "I am your shepherd, you shall not WANT" God does not lie, He feeds the birds, the foxes, the whales, the insects, none of which appear to want anything and all are quite happy and content. When mankind decides it wants something they don't need, the hook is set and slavery is ultimately the result.

Don't you believe God loves you and is sorely hurt that you choose to be enslaved, when all you need is right here for free? The Hebrews walked the desert waiting to be led to the promised land, when all along they were standing upon it. What a shocker that must have been (and a classic DUH moment of human arrogance when we once again listened to the snake whilst ignoring the Creator). Oh what incredible patience God must have â€¦.

When the Civil War broke out the House of Rothchild sent it's agents to Washington to purchase America's war debt through the sale of bonds to them. Lincoln refused and began printing "greenbacks" to finance the war. The House of Rothchild then countered by threatening to enlist France and England into the Civil War on the side of the Confederacy. Lincoln then appealed to Russia for support and got it. Three Russian naval ships were seen docked in the San Francisco Bay.

Abe Lincoln successfully thwarted the House of Rothchild's plan of "debt slavery" for the Civil War. As for Russia, they were repaid years later for their efforts by the Bolshevik's War of Terror know as the Communist Revolution which was "bankrolled" by the Chase Bank of New York via Jacob Schiff.

As far as the individual, particularly his/her personal freedom, is concerned, it is difficult to see a significant difference between having to apply for money from the private money creators in order to live (now largely done through the intermediary of government borrowing) and carrying out the orders of a bureaucracy dispensing government-created cash in order to acquire the financial means of survival.

Migchels clearly does not see the financial question in terms of the inherent conflict between the ambitions of large-scale planners and the aspiration of individuals to run their own affairs.

Social Credit was conceived specifically in order to favour the latter end. So it is rather revealing that such "Libertarian" sites as The Daily Bell are actively smearing the Social Credit concept with the same bilge as the Communists do; namely that it is a form of Neo-Nazism. Of course Nazism, like Communism (and indeed like the banker-in-the-woodpile-ignoring Libertarians) promote centralization of power, which is the exact opposite of the Social Credit policy of distributing it.

Robert is one of those Social Credit addicts that can only think C.H. Douglas.

He doesn't understand Usury, let alone what I promote, which comes down to a completely usury free economy where Money Power is with the people.

He seems to believe I promote a purely 'statist' solution.