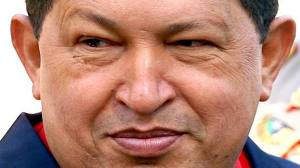 During his reign, the number of private sector jobs declined by an astonishing 30%. Half of Venezuelans depend on the informal economy to survive. Public payrolls have ballooned.

Hugo ChÃ¡vez's fierce resistance to US Imperialism was much appreciated but his domestic policies were openly Marxist. His most notable legacy is the Bolivarian Alliance for the Americas, dedicated at social, economic and political integration of Latin America. In short: he was a globalist. Different a-hole. Same shit. 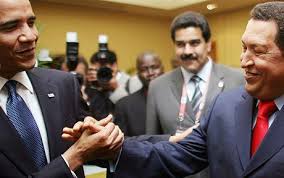 Was ChÃ¡vez also a Mason?  There's this Masonic handshake with Obama.

His model, Simon Bolivar, definitely was. Bolivar led the rise against Spanish rule in northern Latin America in the early 1800â€²s. His Masonic watchword was 'liberty', fitting well with that Masonic construct known as the United States, which only a few decades earlier gained 'independence' from the City.

Bolivar became the president of a country named Gran Colombia which existed between 1819 and 1830. After gaining independence from Spain, the country succumbed to a power struggle between those wanting a strong centralized state and those looking for regional autonomy in a federation. Bolivar led the quest for centralization of power, an eternal tell tale of the real enemy. In 1830 Gran Colombia ceased to exist: the conflict ended when it became a number of smaller entities: Venezuela, Colombia and Ecuador. Later Panama seceded from Colombia.

One of the bankers more memorable, yet unknown defeats. It certainly didn't damage the reputation of their man Bolivar and that is probably not a coincidence. Money Power defeats are not part of the history they write, lest they might inspire others.

ChÃ¡vez made the reliving of the Bolivarian dream a key part of his agenda. It was ChÃ¡vez' answer to the failed US driven 'Free Trade Area of the Americas'.

He financed FARC, a ridiculous outfit run by coke-dealers parading as Marxist champions of the people. ChÃ¡vez called for a 'socialism of the 21st century'. He denounced the Soviet Union as State Capitalism, which is a very apt description. But his own politics were similar in many respects. He created thousands of 'communal councils' throughout the country. In Russian, these are 'soviets'. They are touted as wonderful examples of 'participatory democracy', but are actually run from the top down.

Chavez started tens of thousands of state-owned cooperatives, financed with government credit. As a result, the private sector tanked. During his reign the number of private sector jobs declined with an astonishing 30%. Half of Venezuelans depend on the informal economy to survive. Public payrolls have ballooned.

Venezuela enjoyed an unprecedented oil-boom under ChÃ¡vez and he used some of this money to alleviate the plight of the poor. Housing was a top priority; health spending also rose significantly, from 1.6% of GDP in 2000 to 7.7% in 2006. These are his main achievements. But an oil boom will end and it remains to be seen whether the welfare state is sustainable with such a severely mauled private sector. 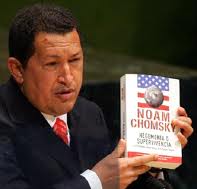 (It's not the Rothschilds! It's the evil Americans.)

ChÃ¡vez did absolutely nothing about the real issue: banking, debt and usury. The Venezuelan Central bank is State owned, as in most nation, except the US. But State-owned means providing State sanction to private banks to loot economy with their usury.

Its banks are private; many are run by his pals. A few years ago, some were nationalized during a crisis. Venezuelans were on the hook for their 'balances', better called black holes. Chavez actually arrested a handful of bankers. But most were left to continue their plunder unscathed.

While he wisely paid off all debt to the IMF and the World Bank in 2008, public debt itself rose from $1400 per capita in 2002 to $3400 in 2010. During this time,  the Bolivar lost 90% of its value. Meanwhile, he subsidized the transnationals repatriating their profits. In addition, he fixed the BolÃ­var-Dollar exchange rate at only one third of the Dollar's real value, an incredible subsidy for Transnationals repatriating their profits and the wealthy importing luxury goods. The poor paid for this subsidy and it cost them untold billions
In short: while redistributing wealth from the middle classes to the poor through taxation, monetary slavery ruled supreme during his reign. 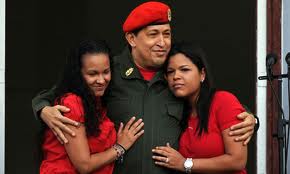 ChÃ¡vez was a self-styled 'socialist-feminist', attacking paternal rights and the family. "In 2008, during an event to commemorate the 9th anniversary of the National Institute of Women (which is now a government ministry) ChÃ¡vez criticized machismo and declared himself a "convinced socialist-feminist".

"Socialists must be feminists or they won't be complete human beings. With the support of our women we must strengthen unity in Venezuela... We have to take firm steps towards...the total emancipation of gender and be more just with our women," he said.

He added that women were condemned by history, but the "Bolivarian administration developed community plans against family violence and in favor of single mothers, which has meant huge positive advances"." http://venezuelanalysis.com/analysis/6743

The results have been predictable: sexual degeneracy, single mums and escalating teen pregnancy.

Venezuela also had an incredible rise in crime under his watch. These days one is more likely to be murdered Caracas than in Kabul or Baghdad. Call it.

As usual with Commie strongmen 'helping the poor', Hugo took good care of himself. He had between one and two billion dollars at the time of his death. Not bad for a kid from the gutter.

Many Venuzuelans will never forget Hugo ChÃ¡vez. He helped emancipate the poorest. He scolded the Empire.

But his legacy is built on quicksand. He did nothing to address the root cause of poverty. All he did was destroy the private sector and the middle classes by switching from a private economy to a State-run one. The wealthy had nothing to fear and much to gain under his rule. Meanwhile he furthered the Internationalist agenda by laying the foundation for Latin American 'cooperation'.

It's difficult for many to see that the evil US Empire is 'opposed' by forces no less evil forces. Be it the Russian, Chinese or whatever leadership.
Hugo ChÃ¡vez was one of them.
---

Anthony Migchels is an Interest-Free Currency activist and founder of the Gelre, the first Regional Currency in the Netherlands. You can read all of his articles on his blog Real Currencies  -

Related - Chavez - Inside the coup
The US Empire is Not the Money Power!Muammar Gaddaffi and the Money PowerIs China part of the New World Order?"Socialist" Chavez worth $2 Billion
Lefties Love Hugo

Good job exposing these stooges, what's funny is how easily people can be deceived, the guy's 21st century socialism is a big joke, look at what even Marx wrote about Bolivar:

"To see the dastardly, most miserable and meanest of blackguards described as Napoleon I was altogether too much. BolÃ­var is a veritable Soulouque [the former slave, later President of Haiti]
http://www.versobooks.com/books/399-the-bolivarian-revolution

It is impossible to portrait Chavez without explaining his participation in the continent-wide Forum of Sao Paulo.

The Forum is an association of Marxist political parties, leftist terrorist organizations and NGOs, with the objective of promoting the Communist takeover of Latin America. They have succeeded almost completely in this objective. Cuba, Argentina, Brazil, Uruguay, Venezuela, Bolivia, Nicaragua, Peru and Ecuador are all active participants in the Forum.

Marxist governments in the group help each other, many times against the interest of their own citizens (Marxism is anti-patriotism). Chavez sent millions to Argentina in order to see Kirchner elected. Lula gave millions to Bolivia's Morales, and even a refinery to Chavez and a new harbor to Cuba. The revolution is what matters: in Venezuela today, food is lacking from the supermarkets, but there is money to send to terrorists.

Recently, a coup was instituted against Paraguay for not desiring Venezuela in the Mercosur group. Against all previous treaties, they invited Chavez to the bloc without Paraguay's consent.

Cuba is behind much of what is done. NicolÃ¡s Maduro, Chavez's successor, was trained in the Cuban secret service and sent to Venezuela to work as a bus driver. In reality, his job was to subvert and take control of the unions. He is basically a Cuban agent, as are many top figures in the Brazilian government, like the president Party's Machiavel, JosÃ© Dirceu. During Chavez illness and even now, Venezuela was governed by Cuba.

The talk about Simon Bolivar is just demagogy. Chavez was a Mason, but he was also a santeria practitioner in private and a Catholic in public. More than anything, Chavez worshiped Castro as a god and Marxism as his religion.

For much excellent material on Latin America's fall to Marxism, try http://notalatina.blogspot.com.br or see the Google English translation at http://bit.ly/13yQhoR

I' m glad someone outside from the mainstream media acknowledged the real legacy of Hugo ChavÃ©z and the implicit hopelessness of the Venezuelan people that after his death, still have no viable options at the ballot.

However you are seriously wrong on something: a Latin American Union, at least a Great Colombia state, was not intrinsically an evil construct. The fact of the matter is that a federal solution encompassing several Hispanic nations would have been better for most nations of the region, instead of being condemned to be powerless and thus voiceless entities in the global scenario run by idiotic but "democratically elected" despots, yes-men to the real powers that be.

Unlike Europe, most Hispanic American nations are not real nations, not real homelands yet but nations in 'progress (as I would call them),due to the fact of their recent and artificial creation (the independence movement as you hinted and anyone who has researched Hispanic-american history was a conspiracy run by the local overlords to seize complete control of these lands, hence the support many Amerindians and even blacks gave to the royalist forces in the independence wars once they realized what their real status would be in the new societies.).

Thus many nations of our region, in time could become one or few big federal states, instead of a myriad of nations and the bloodshed this development would cause in time. If there has been no bloodshed is because the international 'powers have intervened and there is an "international law", otherwise, we would be like Europe before the World Wars.