George Hunt was present at the 'Fourth World Wilderness Congress' in 1987 and noticed that it had little to do with the environment movement and more to do with the UN's agenda for world government and depopulation.

Our national leaders are nothing but errand boys for the Rothschilds.  At the UN "Earth Summit" Conference in 1992, they sold us out in terms of national sovereignty, democracy, personal freedom and genocide. Under the guise of "conservation," they adopted a depopulation agenda which really means conserving the planet for the people who own it. The scamdemic and "vaccines" are the result of this long-term Illuminati depopulation plot.  See Makow What is Communism?
Source

As this presentation shows, their intentions are not only to make massive amounts of money (from carbon credits), but also to ensnare the populace within a new web of social control. ...Implicit in all the above is that nations have to be prepared to subordinate, to a certain extent, some element of their sovereignty to this world initiative ...

The leaders of this movement advocate tyrannical World Government and mass depopulation. This is illustrated by a chilling document written by the UN magnate Maurice Strong, an agent of Edmund de Rothschild, that was taken from the conference Hunt attended.

Excerpts are as follows:

Given global instabilities, including those of the former Soviet bloc, the need for firm control of world technology, weaponry, and resources, is absolutely mandatory. The immediate reduction of world population, according to the mid-1970's recommendation of the Draper Fund, must be immediately affected.

"The present vast overpopulation, now far beyond the world carrying capacity, cannot be answered by future reductions in the birth rate due to contraception, sterilization and abortion, but must be met... by the reduction of numbers presently existing. This must be done by whatever means necessary. ...

Compulsory cooperation is not debatable with 166 nations, most of whose leaders are irresolute, conditioned by localist "cultures" and lacking the appropriate notions of the New World Order. Debate only means delay and forfeiture of our goals and purpose.

The UN action against Iraq proves conclusively that resolute action on our part can sway other leaders to go along with the necessary program. The Iraq action proves that the aura of power can be projected and sustained and that the wave of history is sweeping forward. ...

We are the living sponsors of the great Cecil Rhodes will of 1877 ... We stand with Lord Milner's credo. We too are "British Race Patriots" and our patriotism is "the speech, the tradition, the principles, the aspirations of the British Race". Do you fear to take this stand, at the very last moment when this purpose can be realized? do you not see that failure now, is to be pulled down by the billions of Lilliputians of lesser race who care little or nothing for the Anglo-Saxon system?  (Makow- Apparently, this was a temporary rationale. For British, read Satanist and Satanist Jews.)

The Security Council of the U.N. Will explain that not all races are equal, nor should they be. Those races proven superior by superior achievements ought to rule the lesser races, caring for them on sufferance that they cooperate with the Security Council. ...

All could be lost if opposition by minor races is tolerated and the vacillations of those we work with, our closest comrades, is cause for our hesitations. Open declaration of intent followed by decisive force is the final solution."
A follow-up Cobden Clubs document contains the following words:

"Anyone attending this conference knows that the Earth is overcrowded. People are crowding out other forms of life that have the right to exist.

The time has come to make effective proposals for population reduction and to show the public that ongoing efforts to reduce population have been effective and socially hygienic.

The way to overcome to outmoded and harmful moralisms is to show that certain behaviors and life styles effectively promote the cause of population reduction. While some may oppose homosexuality or cross-generational sex, they can be brought to understand how beneficial these might be in reducing the population,

Homosexuality, for example, has the clear advantage of being non-procreative. Cross-generational sex, especially if begun early, can open up the child to possibilities of sexuality that will not necessarily be procreative.

While some may oppose drug trafficking, its positive features must be emphasized. Not only does it eliminate a certain number of humans, but it creates a healthy anxiety in the population which reduces their desire to generate posterity.

Once drugs are legalized, the government might consider adding birth control chemicals to the drugs, which, given widespread use of drugs, would seriously reduce the birthrate.

An alternate measure, one which has been proposed before and written about in children's books, would be to add birth control chemicals to the water supply or to commonly ingested foods such as beer, soda, or milk.

But what about the present population surplus? Former Governor Lamm of Colorado was wise and courageous when he said that the elderly should move aside to allow the younger to prosper.

In the United States, the best way to do this equitably would be to balance the budget. This measure, which is popular among taxpayers and lawmakers alike, would cut several hundred billions out of the Federal and State budgets.

Programs for the over-aged and the physically unfit would be vastly reduced. The social expense of people who think they should live forever would be eliminated. Over-aged persons would tend to understand that their time has come and welcome the opportunity to help solve the population crisis. 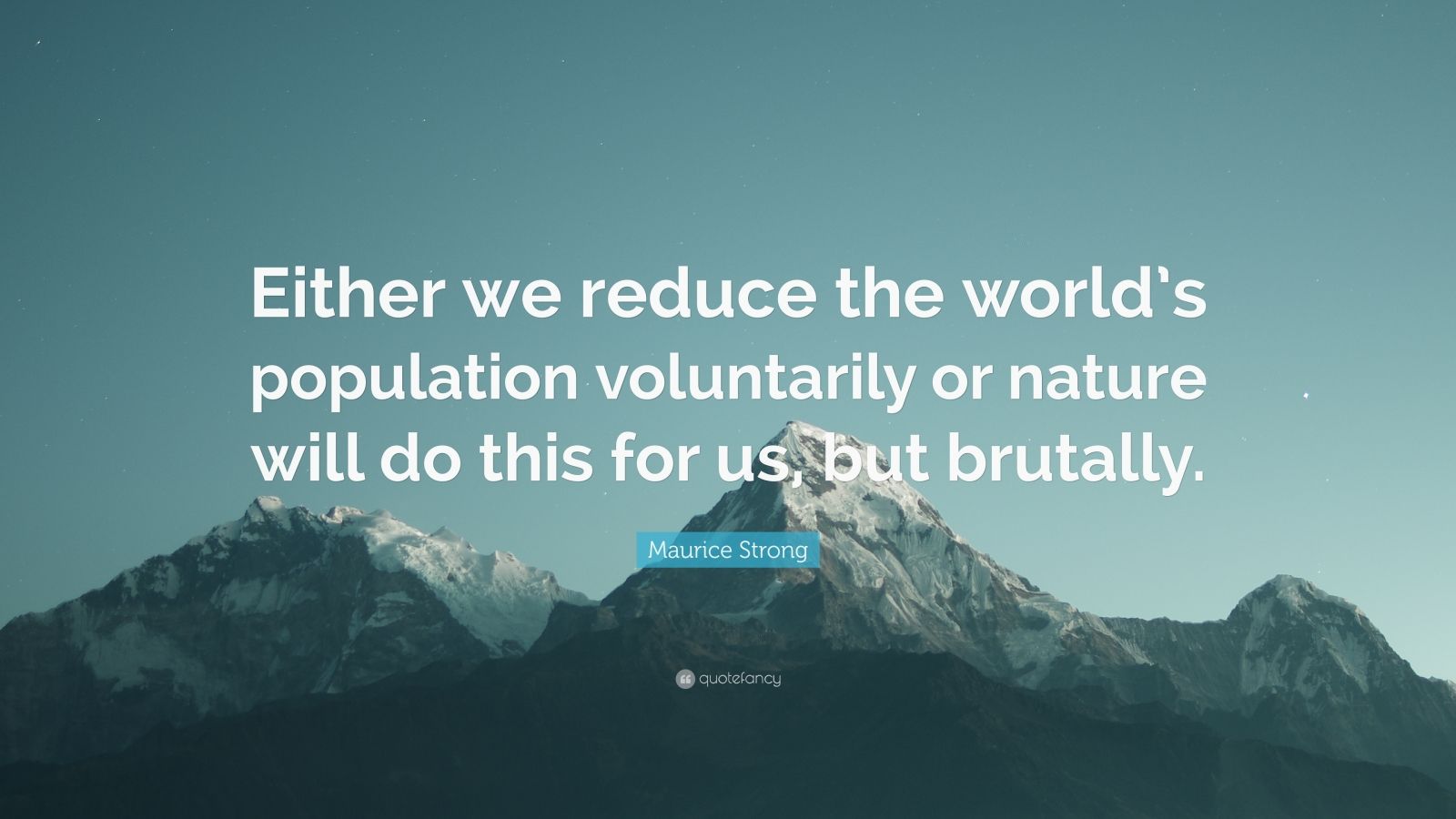 STRONG'S MODEST PROPOSAL
Our most acute concern is the Third World. There the birth rate is still out of control, despite the hygienic measures of food control, medicine restriction, and general economic contractions that have already been applied by the International Monetary Fund and World Bank, both U.N. agencies.

We offer a proposal that will greatly alter the demographics in these, the most populous nations of the world. Our proposal would not only reduce the number of offspring (who might otherwise survive and procreate even more offspring), but enhance the balance of payments of these nations, in line with IMF conditionalities.

The world-shortage of high-protein meat could be solved by canning and exporting, under U.N. humanitarian auspices, the healthy children of these nations. Strict controls would apply to make sure that starved and diseased meat does not enter the global market. (is this for real? hm)

A flourishing export market from the Third World would help these nations pay their international debts and liquidity to the international banking system.

The need to create a taste for this particular kind of meat could be created by innovative advertising and promotional campaigns. United Nations spokesmen and environmental agencies could stress the low fat content of the meat. Cookbooks, talk show hosts, and media personalities can promote the product or give personal endorsements.

Countries that turn down this export program could be subject to a U.N humanitarian blockade, as Iraq and Haiti are today. These countries might qualify as test cases for the new program if there is enough meat left on the children."
Continued
Related - The Depopulation Bomb
-- E c o n o m i c & Population 2030-------Demographic challenges and opportunities for
sustainable development planning

Depopulation has been on their minds for a long time, as this quote from a novel by Aldous Huxley illustrates:

"Given our existing world, you can't go back, you can't scrap the machine. That is, you can't do it unless you're prepared to kill off about half the human race. Industrialism made possible the doubling of the world's population in a hundred years. If you want to get rid of industrialism, you've got to get back to where you started. That's to say, you've got to slaughter half the existing number of men and women. Which might, sub specie aternitatis or merely historiae, be an excellent thing. But hardly a matter of practical politics" (Aldous Huxley, Point Counter Point, 1928).