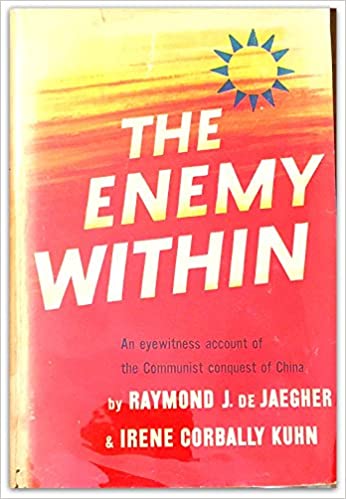 The title actually refers to the USA. The Chincoms got support from the FDR and Truman administrations. This is a gripping if heart-breaking read. The Chincoms committed unspeakable mass murder and atrocities.

The Enemy Within: An Eyewitness Account of the Communist Conquest of China (Jan 1, 1952)

A fascinating story written by a Belgian Jesuit priest who was an eye witness of how the communists cheated the National Government of China into a cooperation to beat the Japanese invaders but instead slaughtered supporters of the National Government so as to establish communist reign over the peoples of China through torture, murder and intimidation.
If the Japanese had not invaded China, this country would most probably have not been under a communist regime to-day. The methods of the communists in China were not much different from what the communists in the USSR did, the Nazis, the fascists, the Japanese military and to-day the Islamic fanatics in the Middle East and Africa. If we do not learn from this true story then history will repeat itself with us or our descendants being the next victims of extremists and fanatics.
https://www.amazon.com/ENEMY-WITHIN-Eyewitness-Communist-Conquest/dp/B000KIHEUQ/ref=cm_cr_arp_d_product_top?ie=UTF8

THE ENEMY WITHIN by Raymond J. de Jaegher and Irene Corbally Kuhn
Belgian Father Raymond de Jaegher first went to China as a missionary in 1930, and from that time until his perilous escape from the country in 1949 he has watched the insidious but systematic spread of Communist domination in the Far East. In THE ENEMY WITHIN he presents a graphic and unforgettable eyewitness report on Red conquest, which might happen similarly in any nation, a creeping terror which unrolled before his eyes "like a Chinese scroll painted by a devil."
First the Communists undermined the traditional Chinese family life, code of morals, and religions, forcing even the peace-loving Buddhists into active underground resistance. They then used the war with Japan to weaken further the National Government, and Father de Jaegher describes one tragic day in the spring of 1940, when the Reds calmly annihilated nearly sixty thousand of their own countrymen, while a Japanese army idled less than fifty miles away. He tells how children were forced to witness beheadings, details the inhuman tortures inflicted upon anti-Communists: freezing, flaying, burial alive, and the "Peiping Express," wherein the unfortunate victim is dragged to death by a horse beaten into a frenzy.
Father de Jaeghcr often finds flashes of humor in his experiences, but most of his shrewd and articulate report is grimly serious. And whether relating events during his imprisonment in a Japanese concentration camp, recounting talks with Chiang Kai-shek, or tracing the vain efforts of the United States to bring peace to China, he tells his story ill terms of people, showing vividly the devastating effects of communism on all classes, from peasant to scholar and banker.
Father Raymond de Jaegher was born in Belgium, educated there and in England, and spent nineteen years s as missionary in China. He came to this country in 1949 and now makes his home in Maryknoll, New York. He lectures extensively on his experiences in the Orient, and during the past winter he returned to Formosa and Hong Kong for a brief visit.
Irene Corbally Kuhn, who collaborated with Father de Jaegher on this book, is a well-known magazine writer, war correspondent, radio commentator, and author who spent a great deal of time in China, both before and during World War II. She currently resides in New York City
http://weihsien-paintings.org/rdjaegher/pages/page02.htm