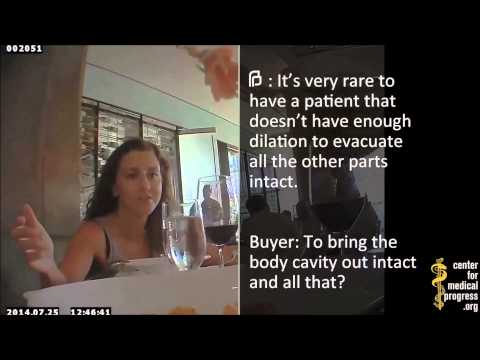 On July 25, 2014, investigators posing as a
Fetal Tissue Procurement Company met with Deborah Nicatola, left,  PPA's Director of Medical Services.
PPA was discovered to have a lucrative sideline--selling the body parts of the babies it aborts.
Planned Parenthood is heavily supported by the Illuminati and represents an
extension of their philosophy that man is an animal with no soul connection to God. He can be slaughtered and his parts sold just as animals are killed and devoured.
Latest: Dismembering living unborn babies is 'very humane,' Planned Parenthood backer tells Congress
by Reality Sept. 2015
Publication of Real Women of Canada
(henrymakow.com)
Planned Parenthood of America (PPA), which carries out a third of the abortions performed in the United States, is a lucrative business. It receives half a billion dollars annually in government funding; as well as half a million dollars annually from unions. Also, approximately 41 corporations heavily fund PPA. Some of these are well known companies such as Avon, Johnson & Johnson, American Express, Levi Strauss, etc.
PPA is managed by CEO, Cecile Richards, who gets nearly $600,000 a year. The annual budget for PPA is $1.21 billion. Although it claims to be a non-profit organization, PPA is a well-oiled money making machine. What could possibly go wrong?
PPA was discovered to have a sideline--selling the body parts of the babies it aborts.
PPA IS IN DEEP TROUBLE
US federal law prohibits the commercial trafficking of fetal tissue for profit, which carries a penalty of up to 10 years in prison and a $500,000 fine. The US has banned partial birth abortions since 2003, which law was upheld by the US Supreme Court in 2007.
A Congressional investigation of PPA has been commenced: governors from 12 states in the US have announced that they will also be carrying out separate investigations of PPA's activities.
Despite multiple mentions of the PPA horror show on cable networks, the three US news networks, ABC and CBS, NBC, have given only minuscule coverage of PPA's activities, dismissing them as merely a "claim" by an anti-abortion rights group that PPA was selling "tissue" for profit. They completely ignored the video of PPA selling intact babies. The New York Times initially reported that the first video was "edited", and it took 16 days to correct this factual error. (There was an edited version, but the complete video was also available.)
Some of the corporations funding PPA have now withdrawn their support.These include American Express, Ford Motor Company, Coca-Cola, Xerox and the American Cancer Society, which had previously funded some cancer control grants with PPA.
SHOP OF HORRORS
This shop of horrors was revealed when an undercover video was released on July 14th showing Dr. Deborah Nucatola, the Senior Director of Medical Services, casually sipping wine and spearing her salad while discussing how body parts are removed from aborted babies. She said a lot of people want intact hearts these days ...and she has had requests for lungs and lower extremities.
In the interview, she admitted that she confers with her colleagues at the beginning of each day to determine what fetal body parts consumers are requesting and which patients that day will have babies from which they will be able to harvest. She then went on to state that they tailor the procedure to assure they do not destroy the desired organs:
"You're just kind of cognizant of where you put your graspers.You try to intentionally go above and below the thorax, so that, you know, we've been very good at getting heart, lung, liver because we know that, so I'm not gonna crush that part. I'm gonna basically crush below, I'm gonna crush above, and I'm gonna see if I can get it all intact."
This video was obtained by a pro-life group called the Centre for Medical Progress, an ethics organization, which sent individuals to pose as supposed buyers from a human biologics company.
When the video was released, Cecile Richards, went into high gear, retaining a public relations firm to spin her story. She claimed PPA was not selling body parts of aborted babies, but merely providing "tissue" for medical research and charging only for the cost of transportation of these body parts to the recipient. 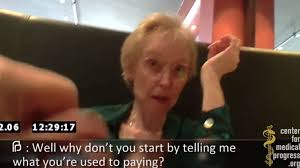 This explanation was quickly dispelled when the Centre for Medical Progress released a second video of another medical employee of PPA. It was a video of Dr. Mary Gatter, the Medical Director of PPA Pasadena and San Gabriel Valley in California.
In this video, Gatter discussed the pricing of aborted baby parts, informing the supposed biotech company officials that the prices for such things as a baby's liver, head or heart are negotiable.While haggling over payments for intact fetal specimens, Gatter offered to use a "less crunchy technique" to get more intact body parts.
A further video showed a PPA official, the director of research for PPA's Gulf Coast, Melissa Farrell, agreeing to alter the abortion procedure in order to deliver an intact aborted baby. According to Farrell, the fees paid for fetal body parts add tremendous "diversification of the revenue stream" for the PPA affiliate.
She then goes on to say: "If we alter our process, and we are able to obtain intact fetal cadavers, we can make it part of the budget to cover dissections and splitting the specimens into different shipments," she said."It's all just a matter of line items."
The last several minutes of that video show graphic footage inside the laboratory of PPA's Houston abortion facility where workers comb through the body parts of a 20-week old baby."It was a twin", an employee says as she retrieves the remains from the refrigerator. Clearly developed hands and feet are seen in the dish, as the investigator pulls out a lung with a pair of tweezers.
These videos rip the mask off the abortion industry and PPA. Money is the motivation, piles of it, for carrying out these unspeakable acts. PPA officials speak of "intact cadavers" while they poke and prod dishes filled with aborted hu- man bodies for sale. PPA is a shop of horrors.
---------
First Comment from Dan:
This video combines PPA President Cecile Richards very expensive and slickly produced damage control commercial, side by side with the footage of the unde-the-table deal.    Needs to be spread around.
Planned Parenthood CEO Cecile Richards' Attempt To Dismiss Viral Video Backfires!
by The Center for Medical Progress
In case anyone is wondering, the baby organ tissue they're talking about in these sting operations is for stem cell  procedures that aren't legal in the United States.  A 2006 law places tight limits on the volume of tissue which may be allocated for research.
A lot of this tissue probably leaves the USA for shady clinics in Mexico and Saudi Arabia where exotic and illegal stem cell treatments are sold for a fortune to desperate people of means.
It does not go to above-board American medical centers and universities.

It will never come out but you can bet the Johnny come lately statutes against selling "fetal tissue" is actually a monopoly plum to planned non-parenthood handed to those ghouls by our satanically criminal congress.

Also, someone needs to ask the question of just who are these "consumers who request certain body parts" and for what use? Fits right in with satanic rituals, etc.

Another giant question: Just exactly why have these revelations not stirred any real discussion of how can these "body parts" be in demand if these babies are not living human beings? It's way past time for the damned (by God) world to quit fooling itself about "women's rights" to murder their own children as though new souls are just an unwanted extension of the selfish, heartless woman. Only a brain dead asshole could ever truly believe that in the first place.

People know better. They've always known better. They know murder of the unborn is a hard to out-do major evil. There hardly exists a worse evil than toleration of evil. . . . Oh, but my country is "God's country," ask any idiotic, robotic flag waver as America's families become ever more dysfunctional, even ever rarer, thanks in large part to this murder of the unborn.

Abortion is murder; there's no other way to describe it. My question is this: If people are so outraged by the selling of fetal body parts, then why aren't they equally outraged by the abortion itself? The government sponsors Planned Parenthood so it must advocate abortion too. This is a part of the movement to limit the growth of the population. What Planned Parenthood should be in troble for is the committing of murder. The selling of the body parts is simply the outcropping of something worse. All bad choices has their payback and the people who advocate the abortion idea are criminals. This is a result of not paying attention to God's commandments. In my view, the abortion is more monstrous than selling the body parts. Advocates of PPA are the excrement of society.