Is Anti Semitism "Good for the Jews" i.e. Zionists? 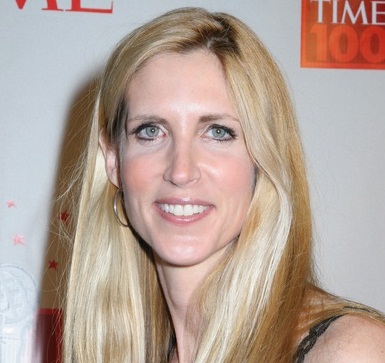 Even a Zionist shill like Ann Coulter could not stomach
the grovelling and pandering to Israel of
GOP candidates at last week's debate. Absurdly,
she was called anti Semitic. In the NWO,  if you're
not anti Semitic, (and anti Masonic) you're simply uninformed.
Defined by Cabalism, Judaism is Satanism.
The NWO is the ascendency of Satanism.
Unless they wake up, Jews won't escape blame.
"It is easier to fool people than to convince them they have been fooled." - Mark Twain
by Henry Makow Ph.D.
Last week, Conservative columnist Ann Coulter used an epithet to describe Jews in expressing frustration with GOP pledges to support Israel.
"How many f--ing Jews do these people think there are in the United States?" Coulter said on Twitter when four of eleven candidates mentioned their support for Israel in their closing remarks. Chris Christie made his pledge when asked: "What will AMERICA look like after you are president?" 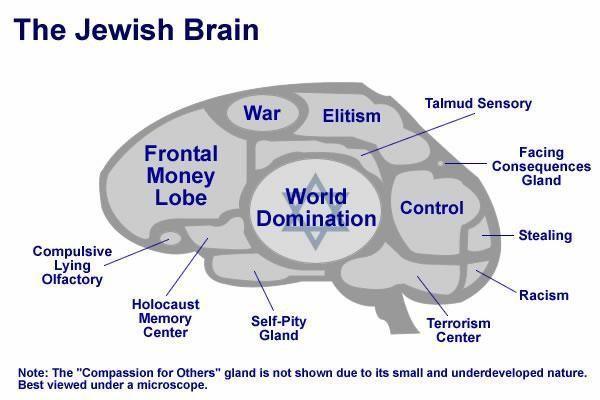 (left, an example of growing "anti Semitism")
Needless to say, Coulter was subjected to a barrage of criticism.
Ann Coulter's tweets this evening concerning Israel were completely inappropriate," Christians United for Israel's Jewish spokesman Ari Morgenstern said. "The U.S.-Israel relationship is both a moral and strategic imperative. There are tens of millions of Christians in this country who stand with the Jewish state."
Coulter said that the charge that she is anti-Semitic is "laughable."
"Anyone with a pulse knows I am pro-Israel and against the enemies of the Jewish people. I have a whole chapter in my current book praising Israel and Prime Minister Benjamin Netanyahu. It's the people attacking me who couldn't care less about Israel or Jews," she said. Coulter is supporting Trump because illegal immigration is the hot button issue in the 2016 election.
GOOD FOR THE JEWS?
Anti Semitism is very good for Jewish leadership but not so good for ordinary Jews who are unaware of the Satanic nature and agenda of the Jewish enterprise.  Anti Semitism enables the leaders to control and manipulate the flock who think they are hated for no reason. This is why Jewish organizations lovingly tabulate incidents of anti Semitism every year. Why the Jewish leadership organizes terrorism and pogroms against Jews. Why the Jewish leadership is implicated in the Holocaust. Why they may have planned it.  Why Jews are trauma brainwashed. Anti Semitism makes Jews support Israel, and if things get rough, move there. (This may be the plan.)

(Left. Hitler gave Anti Semitism a bad name)
Jews are not monolithic. Like all groups, and society itself, the leadership is Cabalist or Satanic (i.e. Masonic, Illuminati). The rank and file are sheep.
Ultimately, if things go wrong, the blame will be cast on the rank and file.
Modern Western culture and society is Satanic, a product of the Cabala which denies God. Satanism is the essence of "revolution" -- turning all values on their head so that evil is good, sick is healthy, ugly is beautiful, lies are truth, unnatural is natural, disgusting is acceptable, etc.  Degradation and decadence are "progressive."
This is the New World Order: Spitting in God's eye. Dedicating mankind to Satan. Secularism and Humanism are both disguises for emerging Satanism. In typical inversion, people who resist this diabolical hatred are accused of "hate."
The goal is for humanity to resemble a satanic cult, Cabalism. Its goal is to concentrate all power -- political, economic and cultural-- in the hands of the Cabalist bankers.
Wittingly or unwittingly, Jews and their Masonic tools are instrumental and anti Semitism inevitably results. If you look at my article, Ten Signs Western Society is a Satanic Cult, Jews and Freemasons are on the vanguard of all these developments. The same applies to Humanity is Satanically Possessed. Many of my articles chronicle this trend. For eg. How the Illuminati Control Culture
Almost everything that is happening reflects society's satanic possession. Every war past and present is contrived: designed to destroy and degrade humanity. The contrived refugee crisis is all about destroying nations. "We will destroy every collective force except our own," says the  Protocols of Zion (16).
The list is endless. The subversion of Christianity and Christian values. The selling of fetus body parts. The promotion of sexual promiscuity  under the guise of sexual liberation and pedophilia via a sex education program designed in Ontario by a convicted Jewish pedophile. The attack on gender and normalization of homosexuality. The degradation of the education system. The control of the mass media.
Not one political candidate in the US or Canada dares criticize Israel? What does that say about the state of freedom and democracy?
The cat is out of the bag. The leadership of the West has gone over to the Dark side. We are confronting an age old enemy --the devil-- who has accumulated overwhelming power and won much of society to his cause.  As facilitators, it is inevitable that Jews and Masons will be blamed for the consequences. Increased anti Semitism is inevitable unless Jews recognize that, like society as a whole, they have embraced Death.
----
Related-  The Devil and the Jews
--------------   Sept 24- JJ Goldberg Why Does Everyone Sound Anti Semitic All of a Sudden?
--------- The Frankfurt School- Communist Jewish Conspiracy to Corrupt
---------------  Anti Semitism has Respectable Pedigree
----------------The Riddle of Anti Semitism

Comments for "Is Anti Semitism "Good for the Jews" i.e. Zionists?"

These politically correct stooges in the MSM like Ann Coulter and others still don't get it.

Anti Semitism, as applied to Ann Coulter, means any quote or form of behaviour critical to Israel or the Jewish power elite will not be tolerated even though you may presently be an active supporter of the Zionist entity itself.

The anti semitism canard is an unwritten law that enforces a " no tolerance" policy of any criticism of Israel, it's leaders, and the Jewish people in the collective tense.

I must admit, Im getting sick an tired of illuminati jews screaming Ã„nti-Semitism all the time.

Semitism refers to language, Arabic,Ivrit and the language that people in Ethiopia and north Somalia speak.

This so-called anti Semitism has nothing to do with race.

Funny thing is, when people say nasty things about Arabs no one yells Ã¤nti-semitism!

The One and Only TRUE GOD will stand by our side!! The ones who have GOD on their side will survive.

The Zionists love "anti-Semitism" because it helps them advance their agenda. I also agree that the "lesser brethren" serve the purposes of the Luciferians at the top, much as "Blue Lodge" Masons serve as an innocent front for the "initiated" of the highest degrees.

"Anti Semitism enables the leaders to control and manipulate the flock who think they are hated for no reason."

If you change the words â€œAnti-Semitismâ€ to Anti-Christianâ€ you have a similar situation taking place in Christianity today. I thought that your picture of the Jewish brain was describing Christian Zionists (with just a few minor adjustments). The frontal lobe could be titled the seed faith and Israel donations lobe. If Christians have not noticed, they are being bombarded daily from their Christian propaganda magazines, TV shows and churches of a â€œChristian Holocaustâ€ taking place in the Middle East, that will soon be coming to America and their own backyard. Just like the Holocaust, this has all been created and preplanned for the sheepâ€™s enslavement to the puppet masters that have complete control of their minds, consciousness and the religion they claim to follow. I was born into Christianity and lived under that particular brand of mind control for many years of my life until I began to actually read and think for myself. To my surprise, absolutely nothing that the institutional religion called Christianity teaches can be found in the scriptures or Yeshuaâ€™s teachings. They have missed everything!!! even though Yeshua taught us that God must be worshiped in â€œTruthâ€.

If Christians are now being persecuted and targeted for their faith around the world, just like the Jews have been, my suggestion for the sheep is to take a look at what their Christian faith is teaching them. They might find our that they are being persecuted for a faith that is teaching them lies and religious fairy tales. Christians in America are way too busy creating an end time war of Armageddon (bloodshed in the name of the Most High so the Most High can return to Jerusalem) and legalized genocide though a group that calls themselves â€œGodâ€™s Chosenâ€, than they are being a â€œLightâ€ in a dark world. For that they will be hated!

On a side note: John 4:21-26. Yeshua did not claim to be God in this passage, he claimed to be the â€œChristâ€ (anointed) that would teach all things:â€”Truth. Humanity does not need another man-made religion or another Pope to find God. This should be a dire warning to us all as the Pope of Rome seems to be setting himself up as Godâ€™s mediator for the planet.