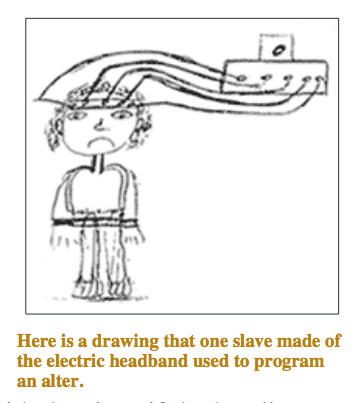 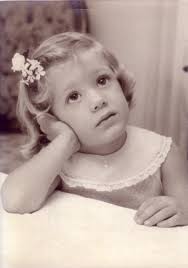 When I was a very little girl I was taught with other children how to be seductive and how to please sexually. Those of us who showed a "natural" ability to know the thoughts and desires of others were more valued than other children. We were praised while other children were cast aside or used for something else. Children of prominent parents were most likely to be trained and used in other areas rather than be considered expendable upon failure in one area.
3.) Schools are used for secret government testing, programming and training centers.
- The 1st private preschool I attended was attended by children of other prominent families who like myself were being tested and programmed.
- The next preschool I attended was originally owned by a good man. It was bought out by a pedophile who worked there and who was part of the network that worked for the underground. Specific boys and girls including myself were taken out of their class to be sexually abused. The wife of the pedophile was one on my teachers. I believe she knew what was going on, but she allowed it to happen. The method employed was that either my teacher would tell me that I had to report to the boy's camp office for misbehaviour, or an older boy from the boy's camp was sent to retrieve me.
As far as the rest of the class knew, other than those who were also usually "in trouble" was that I was "in trouble" again for something bad I had done. Most of the children had no idea what took place in "the ball closet". I was always happy that my "shameful behaviour" was never reported to my mother.
4.) Murder of babies and children by Satanic rituals is real.
I witnessed Satanic sacrifices of babies and children. Most, if not all the adults I witnessed partaking in this knew exactly what they were doing and were fully conscious of their actions in their daily walk in life. These were not programmed alters whose conscious actions were walled off and separated from the core person. On the top levels of the organization, these people are evil and know exactly what they are doing.
- Children of bloodline families do participate in some of these rituals. Often participation will create a split or more.
5.) Murder of babies and children backed and supported by the US government is real.
- I witnessed cold blooded torture and murder of children committed by adults and other children. Most of children used are seen as expendable.
- Some of the torture and murder was done for trauma based programming, some was for entertainment of small groups of well dressed men and women of the "elite".
- I was a victim of both the trauma based torture as well as being the object of torture of social groups who got their jollies out of watching and participating in the torturing and murdering of children. 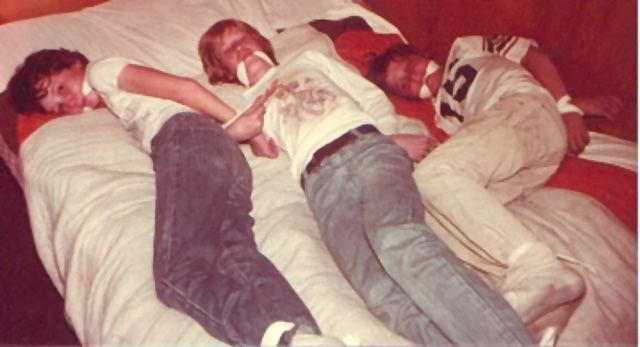 6.) Child trafficking is real.
- Throughout my childhood I witnessed the coming and going of large numbers of children from MacDill AFB. I also saw children in the belly of ships docked in the ship yard of Port of Tampa that is across the channel from the east side of Davis Islands.
There was a facility that was like a large warehouse or airplane hanger where children were kept in cages. Cages were stacked one on top of another sometimes 3 cages tall. Some cages had one child only and other cages had several children. Throughout my childhood years, I witnessed the same pattern play out many times. One night there would be a minimum of 3-6 cages with children and the next night there would be 3-6 more. Then the next night there would be so many kids and cages that I could not count them all. Usually the next day they were all gone except for a few. Sometimes the kids were shipped out in 2 separated batches over a two day period.
I don't remember ever seeing no kids at all. There were usually no less than 6 kids. Once in awhile there would only be 3 children, but that was only for a day or so and wasn't the norm.
- Another place where programming and "training" was sometimes done was in a ship docked in the shipyard at the port in Tampa near downtown Tampa. It was on this ship that I have witnessed children being kept.
7.) Government sponsored children facilities where children are kept and used for unethical practices is real.
- I knew of a small facility in Tampa Florida that was near St. Joseph's children's hospital that kept children who were used in horrendous experiments and surgeries. I saw some of the children in that facility. I don't know why I was taken there and shown what I was shown. Maybe it was to send me the message that, that could be my fate also. I do know that the experience left some huge impressions on me other than the horror of what I saw. It was ingrained in me of yet another consequence for those who try to escape and it further instilled in me the message that there is no escape from the perpetrators. 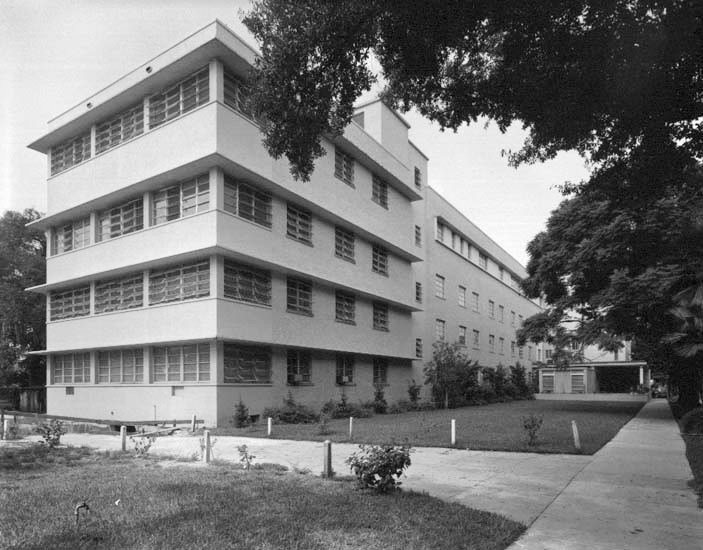 (This is the wing where children were tortured in the 1950's.)
- It was in a wing at St. Joseph's Children's Hospital that a lot of my programming was done. This was also a "teaching" hospital where small groups of adults were being trained to work in the medical field as programmers for the US government. I was used as the subject while my "handlers" demonstrated and taught.
- It was also at St. Joseph's Children's Hospital that I along with a small group of my preschool friends of a private school on Davis Islands all had our tonsils taken out on the same day by the same doctor and his staff. I remember very clearly what happened to me and some of my friends. This was no ordinary "tonsillectomy". What happened to me was validated by Dr. Preston Bailey Jr. as being typical of an Illuminati procedure employing Illuminati techniques.
8.) Training children to be spies and to carry classified information is real.
- As a very small child I was used often for this because few in those days would suspect that a small child like I would be the carrier of top secret information. I am hesitant to go into detail about this at the moment. I will say this much, that I was a valuable commodity for this type of work for various reasons, one of which was that I was a clairvoyant and was able to "sniff out a rat". The late 1950's, early 1960's was a very dangerous and tricky time in the US military and intelligence. Several factions were at war with each other and were jockeying for control. There was a lot of secrecy within our own military and intelligence. It was extremely hard for one to tell if their best friend was actually their enemy. During that time, I was aware of some very good servants in the military and intelligence who were whole heartedly serving the American public. Those people were dangerous to the the factions who were infiltrating. 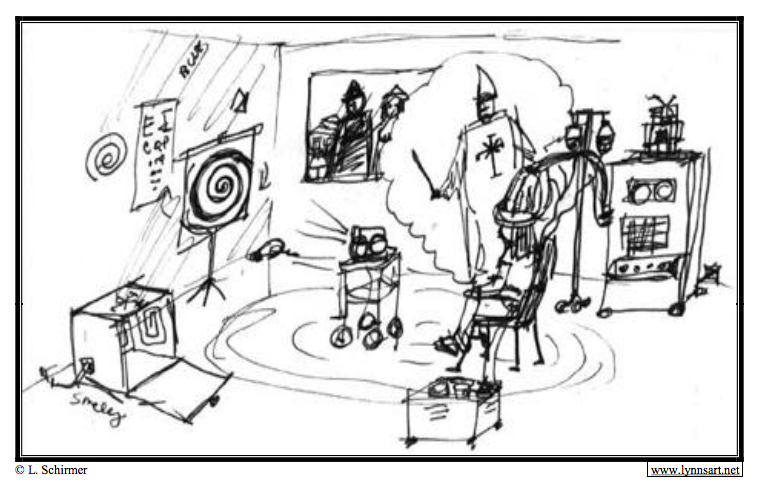 (left, How Carolyn remembers mind control.)
9.) Facilities with rail access were used in Tampa to hide illegal activities and movement of "goods and services".
- In the early 1970's I was in two warehouses in the downtown Tampa area that were on the rail and near the Port of Tampa. Both places were involved in trafficking illegal goods. Behind one of the warehouses was a box car that looked like any other normal box car from the outside, but inside it was equipped with equipment used in mind control programming. This box car was used around the Tampa Bay area as a small portable testing and mind control center that could also transport children to other facilities. The rail car made visits to the University of Tampa and the old Florida State Fairgrounds. Some trauma based programming for children and other young people was done on those grounds.
10.) At the top levels, the FBI, US military and the mob have agreements where they all can benefit. Still a very tricky business, like working with rattle snakes and scorpions.
- In addition to MacDill AFB, Tampa Florida has ports and airports that import and export illegal commodities. I have witnessed the FBI in Tampa taking a blind eye to illegal drug trafficking and moving of stolen goods out of Tampa as long as arrangements have been made to insure that they get a cut of the action in one way or another.
~
Related
by Carolyn Hamlett
TOWARD A NEW WORLD ORDER - US PRESIDENTS DOING THEIR PART - The Progression
Illuminati Pedophilia- A Victim's Memoir
The Plan
Underground Bases and Nephilim are Real- Insider
---------------------------------------------------------
Jeb Bush linked to CIA Money Laundering, Drug Cartels etc.
First Comment from Emma:
This is a mirror of the Hampstead case in London.
Now so many children- now adults in UK reporting similar abuse etc in other areas.
I am fully aware of a case in Liverpool- and when mother escaped for a few years social workers came after her and gave her children to the grandmother- who was involved in pedophilia, drugs etc.
Not a single solicitor or minister etc would touch that case.
Even in RCJ- case numbers were altered, transcripts removed and altered.
Even the baby adopted with a refusal of care order in place - they do as they please.
We discovered the pattern of women professionals involved in procuring the children.
Lots of money was made and the children's lives ruined. just one escaped as he was too old to put in care.
I have seen all the files personally.
I got threatened at night- as all our calls were being listened on- which we knew as we both rather psychic.
Certain blood groups are selected too.
I only know because I worked on the cases for years, met the children etc and promised them that one day they would receive justice...

Thanks for spotlighting Carolyn's articles and this new one. I greatly admire her. I could sense a genuine relationship with the Lord, in her wise observations on her blog. Most notably, early on, getting acquainted with what she was saying and her observations, she mentioned being on a talk show, and given encouragement by one Lester Sumrall. He is in heaven today, but a heavyweight among Bible teachers and minsters who had miracles in their meetings and dealt often with the powers of darkness and demons, and always had the upper hand. That cemented Carolyn's mission in my heart; patted on the back by Sumrall, under some apparent criticism.