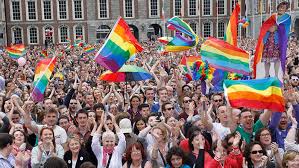 (left, Irish embrace societal suicide)
George writes:
I am mortified to be Irish today.  Actually, I'm half-Irish, and considering formally taking out British citizenship in protest at the idiocy of my fellow countrymen and women in Ireland, being the first country (as of last Friday the 22nd) to legalize gay marriage by a popular vote.
The amendment to our Constitution is radical - not only does it legalize same sex marriage, the legal implications of the way the amendment was drafted gives constitutional protection to alternative forms of human reproduction and surrogacy.
Our country was identified as a soft touch and targeted.
A $64million fund was pumped into Ireland from the US to back the "Yes Equality" campaign, but the most sinister development is that the national police force An Garda Siochana had their union call for a Yes vote, as did the Law Society of Ireland and all semi-state bodies.
It was left to a minority of religious groups and a handful of brave journalists and lawyers to speak of the catastrophic implications of the amendment's passing.
The final result was 62% Yes 38% No.
Thank you for your insightful articles which I have been reading for some time.  The manner in which "No" voters were subjected to abuse and threats mirrored exactly the protocol you have warned of.
The UK is no better but at least when they legalised SSM it was by legislation and not a constitutional amendment with little or no fanfare.
I cannot and will not live in a society such as Ireland that places such little value on children or freedom of expression.
---
Colm Agrees and suspects Electoral Fraud:
I agree with most of what your correspondent says re the degenerate moral state of modern Ireland, but personally I'm far from convinced that the gay marriage referendum result is genuine. Some of the results from working class and rural constituencies strike me as bizarrely far-fetched - with eight to one majorities in favour.
Anyone who knows the Irish working class - the working class in general indeed - knows that they tend to be strongly "homophobic" for reasons that have little or nothing to do with religion. Even militant homosexuals like the late Gore Vidal have admitted as much. Plus there is irrefutable evidence of systemic fraud in previous Irish elections and referendums. To give just one example from many: in the 2009 Irish EU elections, an anti-EU pro-Palestinian campaigner had 3,000 votes stolen from him. This was only revealed after another candidate demanded a recount. The significant thing about this episode was the way the media completely ignored the whole thing. In the next day's Irish Times, what was in fact a huge scandal received only a passing mention in the report on the results from that constituency. This blithe attitude suggests not only that such vote fraud is widespread in Ireland, but that the media know about it, and collude in it. By the way, the police also refused to investigate this matter - in spite of repeated requests from the wronged candidate. The Irish police and state class are deeply corrupt - so they would not in any way baulk at rigging a referendum - especially if the price was right. They have rigged such votes several times in recent decades, e.g the 2009 Lisbon referendum.
In the 2011 Irish Presidential election the state broadcaster, RTE,  uncannily published the correct result on its teletext service, hours before the polls had closed, even though an opinion poll the previous day had put the alleged winning candidate 15 points behind one of his rivals.  Moreover, if the Irish police (Garda Siochana) officially supported gay marriage, how could they be relied upon to supervise the conduct of this vote? - foxes, hen-houses etc. Another question worth asking is where all the many millions poured into the Irish gay marriage campaign by globalist oligarchs actually went? Posters? Leafleting? Canvassing? In a small country like Ireland the first two cost next to nothing, and the last should, theoretically, cost nothing at all (though clearly Soros, Rockefeller, Feeney & co are often compelled to pay for foot-soldiers on the ground). Be that as it may, my guess is that much of this money may well have gone to greasing the palms of those charged with running and over-seeing the referendum. Something tells me Irish election officials and police officers may well be in the market for Spanish holiday homes this Summer
For me electoral fraud is the final and by far the most important frontier of the truth movement. It makes no sense at all to believe that western governments would instigate genocidal wars on phoney pretexts and yet refrain from rigging elections and referendums - a far less trivial offence by comparison.