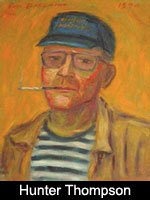 The "suicide" deaths of Hunter Thompson, Gary Webb and J.H. Hatfield show that reporters who expose the criminal activities of our political elite are risking their lives.

They are on the front line of freedom. When they are killed, it means very bad things are in store.

In the latest issue of "World Currency Review," veteran British intelligence analyst Christopher Story warns us to expect a tyranny in America worse than Nazi Germany or Stalinist Russia. I'll elaborate below.

Hunter Thompson was killed late last month. He was working on stories dealing with a homosexual callboy (or programmed sex slave?) ring in the Bush White House and the demolition of the World Trade Center.

Gary Webb was killed in December. His specialty was the Cocaine Import Agency (CIA).

J.H. Hatfield "committed suicide" in 2001. His book "Fortunate Son: George W. Bush and the Making of an American President" was actually withdrawn by the publisher during the 2000 election campaign. About 100,000 copies were actually burned!

In the book, Hatfield established that G.W. Bush was convicted of cocaine possession in 1972. His father had the record expunged.

Otherwise Hatfield's book is quite positive about Junior. I never thought El Presidente had the wit to fly a jet fighter. Two other details caught my attention:

One of the original investors in Daddy Bush's Zapata Oil was Eugene Meyer, a Chairman of the Federal Reserve, a war profiteer and the publisher of the Washington Post. The Bushes were always operatives for the Illuminati bankers.

And when Junior was looking for investors in Arbusto Oil, James Bath staked him. Bath was a close business associate of Osama Bin Laden's father! This supports my contention in "Bush, Bin Laden Serve the Same Master" that the globalist elite directs the War of Terror against the American people.

Christopher Story is the author of "The New Underworld Order: Triumph of Criminalism and the Global Hegemony of Masonic Intelligence,"(available from amazon.com.uk)

I haven't read it yet but I have read the latest (winter 2004-2005) issue of his"International Currency Review."

Story has extensive contacts in the Intelligence Community. Essentially his view is that, despite the supposed "fall" of Communism (See Anatoly Golitsyn's The Perestroika Deception) the Illuminati bankers continue to use Russia, and specifically the KGB successor agencies to foster their world tyranny, which he defines as:

"The destruction of the nation state and its replacement by regional and global governance systems, with a small, self-appointed elite controlling the world's resources at the expense of everyone else, for their own benefit. This is the essence of the world revolution through which we are living."

Story says that this "revolution" uses corruption and criminalism as instruments. Soviet intelligence operatives were literally retrained as criminals and infiltrated into Europe and the U.S. He says the US intelligence community also is used to foster moral corruption partly to blackmail and bribe holders of public office. No elected official "can move," he says.

"In this coup d'etat by installments, the US intelligence community has impregnated and corrupted the republican form of democratic governance by blackmail...and by always ensuring that its own personnel occupy the most important policymaking posts. In this respect there is no difference between the US and Soviet Systems."

This is literally true in terms of personnel. The list of "former" KBG generals working for the new Dept of Homeland Security includes Yevgeny Primakov, Alaxander Karpov and Oleg Kalugin. These men continue to serve "the covert Communist Party of the Soviet Union." (82)

The Dept. of Homeland Security, headed by Israeli-US joint citizen Michael Chertoff, is accountable to the President only. Its entire dealings are secret. It operates with impunity.

In an interview, Primakov volunteered that when the National Identity Card act (NICA) is passed, the Posse Comitatus Act is overturned, and other forms of repressive legislation are approved, "the White House will have acquired greater control over the American people than the Kremlin could exert when Stalin was alive." (82)

Story says that "the volume of official criminal operations and funds stolen have exceeded mind boggling numbers...only the most draconian control mechanisms can ever guarantee the immunity of all the high-level perpetrators...from exposure, arrest, indictment or worse." (110)

He reminds us of George H.W. Bush's comment that "if the American people knew what we have done, they would string us up from the lamp posts."

The "draconian control mechanisms" include the construction of an American Gulag, a system of "prison camps" in army installations, euphemistically known as the "Civilian Inmate Labor Program." The same thing has happened in Canada.

Christopher Story is describing the stealth Communist takeover of the USA. How better do it when everyone is thinking Muslims, and our elected officials are too corrupt and compromised to protect us?

The Illuminati puppeteers appear to be setting the stage for a world war between the US and Israel on the one hand, and Iran, Russia and possibly Europe and China on the other. The Iraq war is a proxy war like the Spanish Civil War. According to Story, the Russian GPU prepared the Iraqi insurgency.

World War may be preceded by a breakdown in the world financial system prompted by financial and criminal excesses or the abandonment of the US dollar.

Or a "terrorist" event could provide an excuse to impose martial law, the draft, confiscate gold etc.

I almost didn't write this week. I felt like taking a break from this stuff. Spring is teasing us here in the North where I live. The days are getting longer.

Divorced from our real history, we are taught to think of concentration
camp, plague, mass slaughter and secret police as things from a benighted past.

The events of Sept 11 have brought us back to rude reality. The forces
responsible for the excesses of Nazi Germany and Stalinist Russia are
responsible for 9-11. They still rule the world.

The Internet is abuzz. The American sheeple are stirring. Wolves have slaughtered some at the edges. Three thousand at the World Trade Center; ten thousand in Iraq; some reporters.

The sheeple hope they will be spared if they keep their head down and
play stupid. If history is an indication, this won't be the case.

Scroll Down For Reader Response